New tree will be planted but species not decided yet, says council

NEIGHBOURS are weeping for a willow that cracked and fell in a storm yesterday (Thursday) morning.

The tree was a popular landmark in the middle of the roundabout at Loudon Road and Belsize Road near South Hampstead rail station.

Children were clambering over the remains of its twisted trunk today (Friday) before the last logs are removed this weekend.

Council officials say they inspected the tree in 2018 finding nothing wrong with it. They say they will plant a suitable replacement, although a species has not been decided.

It is not clear how old it was because access to records are restricted because of Covid, the Town Hall added.

But some older residents recall it being there in the 1970s.

John Baldock, who grew up in the area, said: “The willow on South Hampstead roundabout was a landmark for me in so many ways. As a youngster I used to run to the shops for my parents and it marked the turn round point in my mind’s eye.

“As a 10 year old I had an appendicitis attack and was laid out in the shade of that kindly, beautiful tree before the ambulance picked me up from the middle of the roundabout and ferried me to the Royal Free.

“And as a 16 and a half year old my dad took me to the pub [The Britannia], that’s now a Tesco, on that roundabout and I had my first taste of alcohol on a sunny summer afternoon looking at its soft, inviting plumage from the beer garden. Happy memories indeed. Farewell and thank you willow tree, you helped to steer me on the journey from childhood to adulthood.” 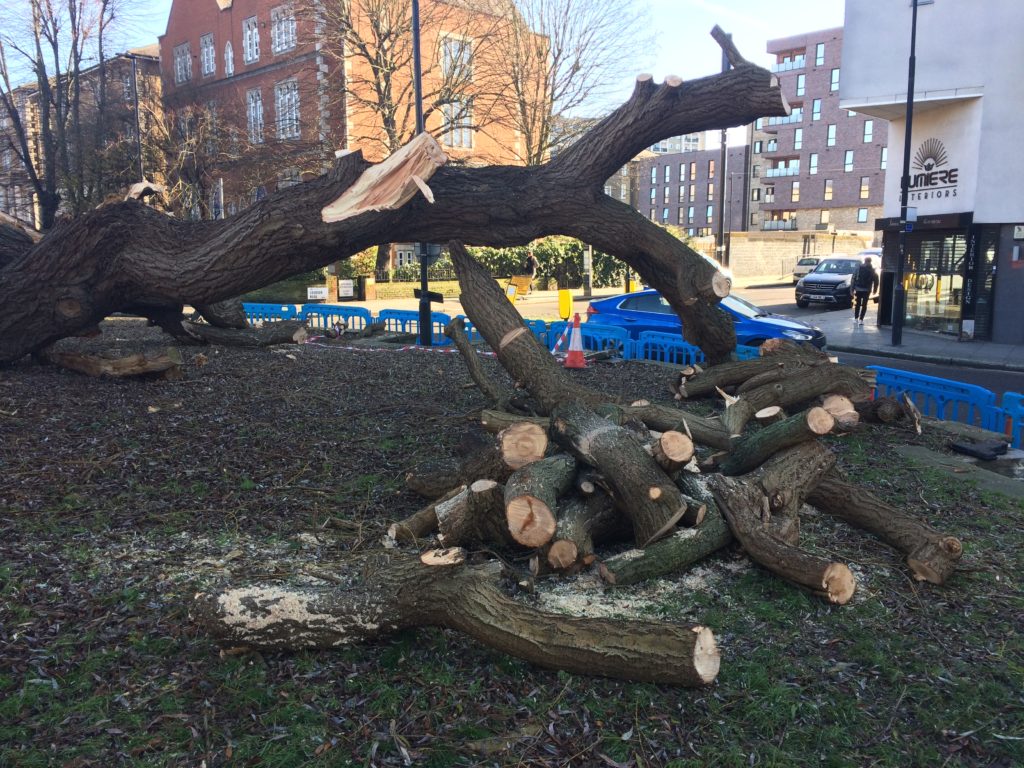 Journalist Paul Carter, who grew up in Fairhazel Gardens, said seeing the tree in an online post had “brought back so many childhood memories”, adding: “Every day I walked past the tree – might have been a sapling then – on that roundabout on my way to George Eliot primary school in the early 1970s.

“It was a route that took me past a small parade of shops in Fairfax Road, over the zebra crossing on Belsize Road and past the Blue Star (Renault) garage on my right, before walking past South Hampstead station and on towards school in Marlborough Hill.

“I still lived in the area when I started secondary school and remember The Britannia pub, on the other side of the roundabout, quite fondly. It was the first pub that served me under age.” 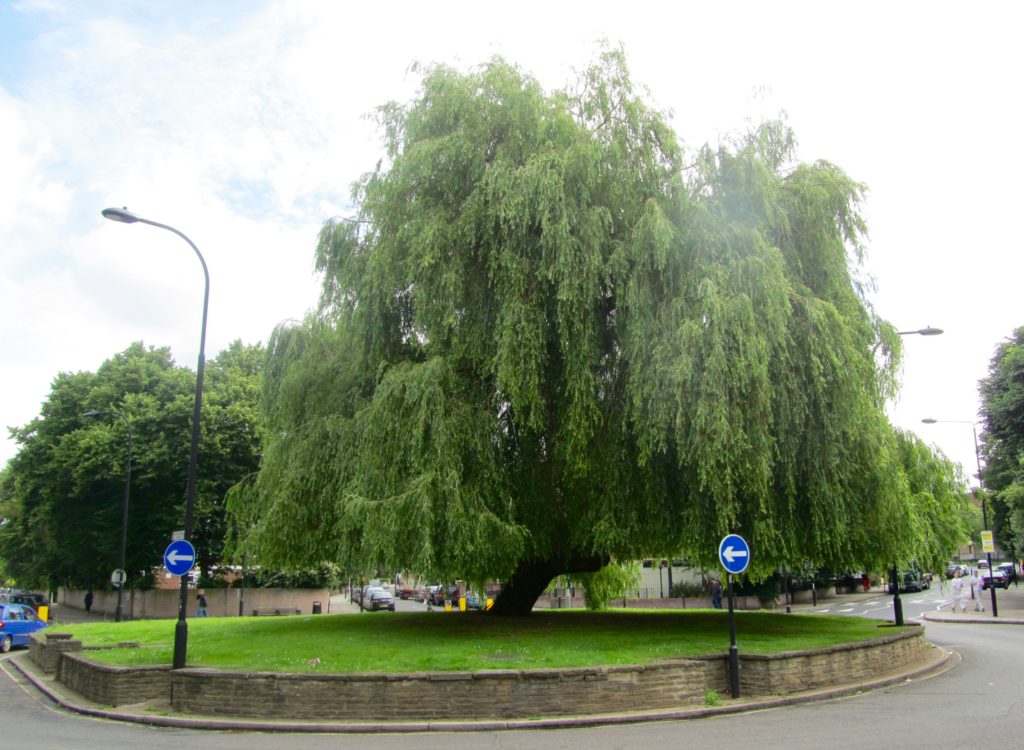 The willow in its former glory [@FORrowley]

John McCarthy, a former council worker, said: “I used to mow the grass on the roundabout fortnightly, caught some much needed shade under that beauty a good few times. Shame to see it down.”

Current residents have called for a fitting replacement and questioned whether the tree had been properly cared for.

Mr Weindling said: “The roundabout does not appear until the 1930s, probably with the
increase in motorcars.

“It seems likely they planted the willow after they built the roundabout. But the maps do not show the willow tree.

“Willows have shallow roots so not surprising it was blown over.”

The council said the tree was inspected in October 2018 and found to be in a good condition.

A “right tree for the right site” review will take place with ward councillors notified of the species selection. The Town Hall hopes to re-plant this season. 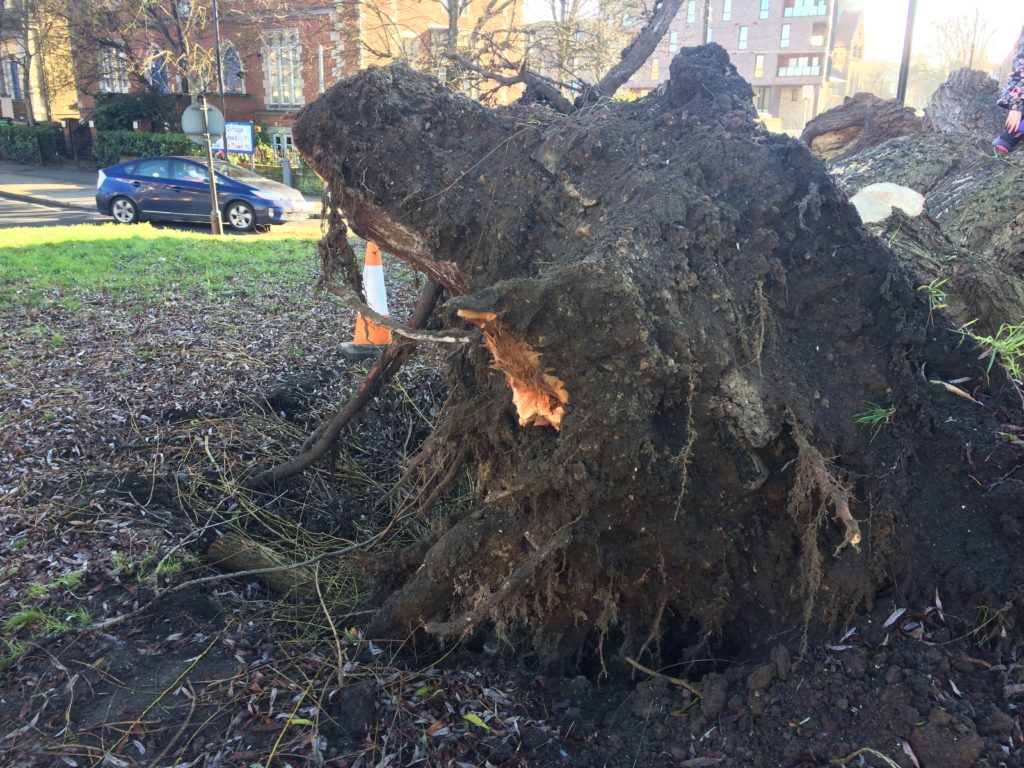 Swiss Cottage ward Cllr Leo Cassarani said: “We fully recognise the impact of losing such a majestic willow tree in such a prominent, recognisable location — and we want to be as ambitious as we can when it comes to replanting.

“We’ve already told tree officers that they shouldn’t worry about costs because we believe this would be a great use of local CIL money, of which we’ve already put aside over £200,000 for local greening projects in Swiss Cottage.

“We hope we’ll be able to do the fallen tree justice and to do it as quickly as possible, though we recognise the challenges around planting more mature trees and the need to wait for an appropriate planting season.

“As always we’d love to hear from any residents who have thoughts or suggestions for that part of Swiss Cottage. But this is still a huge loss of an irreplaceable community asset.”

A council spokesperson added: “The council was alerted to the fact that this tree had fallen in the early hours of Thursday morning, having been uprooted by the strong winds caused by storm Christoph.

“After initially ensuring the area was safe, we are removing the fallen tree and expect this work to be completed this weekend.”