Nazanin’s husband on hunger strike for the second time 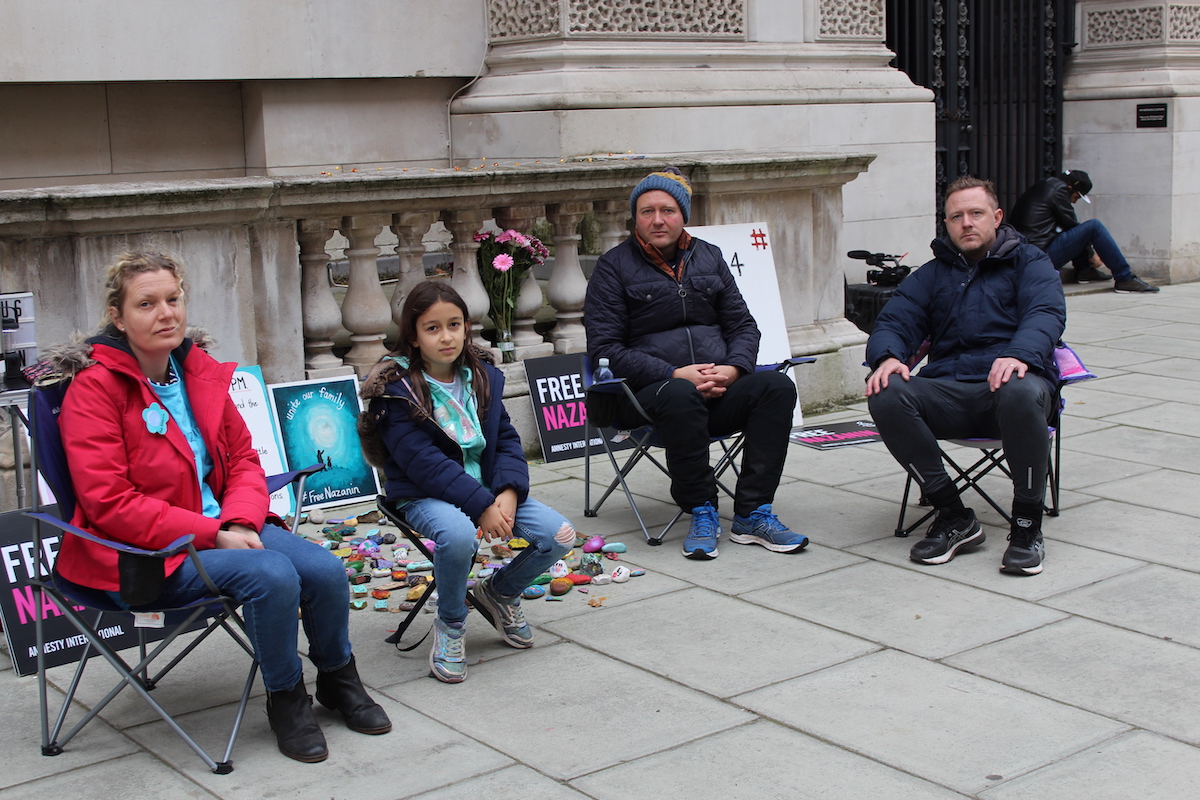 THE husband of Nazanin Zaghari Ratcliffe has slammed the government for playing a waiting game as he launched a hunger strike protest.

Richard Ratcliffe has set up a camp close to the Foreign Office, in King Charles Street, Whitehall, aftder his wife lost an appeal against her sentence in Iran being extended.

Mr Ratcliffe spent 15 days on hunger strike in 2019 when he camped outside the Iranian Embassy. He is now focusing his protest against the government.

He told the New Journal: “We’ve moved to make the point that the government needs to move. I’m frustrated with the way the British government is responding. There’s real jeopardy – it just feels like the same policy of waiting.”

Last time around doctors became concerned about his health and recommended he drink some minerals.

“The second day is the hardest, but then your stomach stops thinking that lunch is going to come and it improves,” he said. “I’m a bit tired and dozy now, which is to be expected at this stage.”

He said: “We’re meeting to discuss strategy. Last time I was incredibly disappointed, but at least I have it.”

Ms Ratcliffe was originally sentenced to five years after being arrested on vague spying charges in Tehran airport in 2016.

She was found guilty of plotting to overthrow the state in what family and supporters describe as ludicrous accusations.

Despite there being no hard evidence, her sentence has been repeatedly extended with it being widely accepted that she is being held as a pawn in a political power struggle between Iran and the UK.

Since the pandemic, she has been tagged and allowed to live with her parents – but there are fears she will have to return to jail following the latest court ruling.

Mr Ratcliffe said: “I spoke with Nazanin this morning, she’s worried, firstly about when the call is going to come to send her back to prison, but also for her husband who’s camping on the street and her daughter who’s in front of the cameras.” He added: “She’s increasingly worried, she can’t concentrate on anything.”

A stream of MPs and journalists have visited Mr Ratcliffe in his encampment.

His six-year-old daughter, Gabriella, was with him when the New Journal visited yesterday.

Mr Ratcliffe said his campaign had four demands: “The first one is simple, it’s just the prime minister using the word ‘hostage’ to describe Nazanin and the others. The second one is a list of sanctions for Iran which could be [implemented] reasonably quickly.

“The third one, to settle the £400million debt the government owes Iran, is not too bad.

“But the fourth one, to end hostage-taking as part of the nuclear deal, is tricky. It needs all of the international communities to work together.”

Mr Ratcliffe said he would stay in his camp until at least Sunday when an Iranian delegation arrives for Cop-26, and will stay there for the duration of their visit.

Mr Ratcliffe is planning to carve Halloween pump­kins with his daughter tomorrow (Friday) with supporters invited to join them between 1-3pm.

Tulip takes case to the Commons

HAMPSTEAD and Kilburn MP Tulip Siddiq raised the Nazanin Zaghari-Ratcliffe case in the House of Commons this week – the eighth time she has done so.

She said: “I urge the minister, for Nazanin’s sake, for Richard’s sake, for Gabriella’s sake and for the sake of all British citizens imprisoned in Iran or at risk of being taken hostage, to commit to a robust response to Iran and a proper rescue plan for Nazanin.”

In response to Ms Siddiq, James Cleverly, the minister for the Middle East and North Africa, said: “We will continue to raise our concerns with our Iranian interlocutors at every level, and we will not stop until those who have been detained unjustly are at home with their loved ones.”