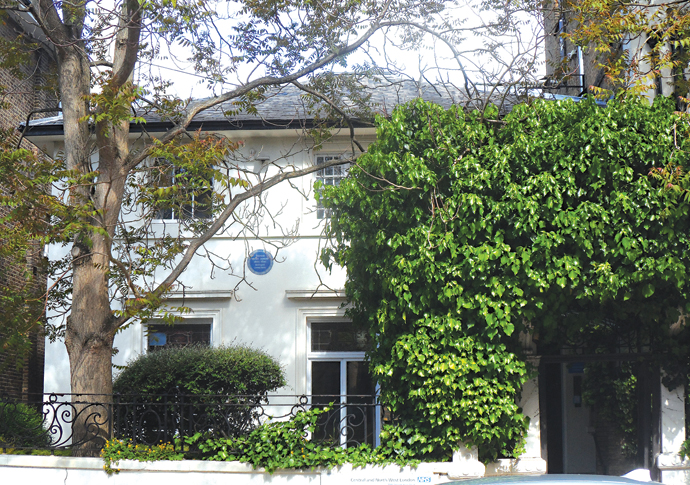 HELLO, and welcome back to our footsore tramp around this marvellous borough.

As regulars attendees will know, during lockdown, Diary has been charging up and down streets, strolling along avenues, and traversing roads to delve into the fabric of this ancient patch of town.

We parted in Scott Ellis Gardens last Friday, so now head northwards to the quiet garden vibes of Alma Square. The name immediately tells us a bit about when it was built: the Battle of the Alma, spun as a heroic victory for Allied forces against Russian in the Crimea, was fought in September, 1854. Lord Raglan’s troops had forced Prince Menshikov’s soldiers from the heights above the Alma river, and reports by the first modern war correspondent, William Russell, brought news of a victory. Patriotic house builders created a raft of streets in honour.

As the Crown sold off parcels of its land in the 1700s, the successful wine merchant Henry Samuel Eyre saw an opportunity, and snaffled up 500 acres of grassland and farms around St John’s Wood. It was on his manor that Alma Square was built.

Work started in the late 1700s but took time to get going. Land use was for growing crops and animal feed – though less idyllic pursuits were also recorded. In 1806 the Earl of Orford, Horatio Walpole, who had land here, fired off a series of increasingly angry letters to the City of Westminster complaining that a neighbour, John Hill, was not caring properly for his land and had created a stench-making “soil pit” that had become a dumping ground for “all sorts of London filth and nastiness”. Hill was also accused of building cottages, which broke the terms of his lease. This patch now houses the famous Abbey Road studios of Beatles fame.

Soon such open space was gobbled up and by the end of the Georgian period the Eyre estate was laid out.

Running alongside Eyre’s patch was land owned by Harrow School – and its influence echoes down by the street names in the neighbourhood, such as the obvious Harrow Road, and then Abercorn Place and Hamilton Terrace (named after the school’s governor, James Hamilton, the first Duke of Abercorn).

It is outside No 20 Hamilton Terrace where we stop and recount a tale of tragedy.

It was here, on a cold day in 1841, a member of the Admiralty ascended the front steps bearing news no spouse wants hear.
Home to Captain Richard Drew and family, he was a retired naval officer who was an Elder Brethren of Trinity House – a board which oversaw the installation and maintenance of lighthouses and buoys.

We know a little of Drew’s background from evidence he gave to a parliamentary select committee investigating which port should become a hub for steam packets bringing mail from the colonies in the Caribbean.

He told the MPs: “I was 14 or 15 years sailing out of Bristol as boy and man, and 10 or 12 years out of London. Since I retired from the sea I have been 15 years at Trinity House. A great portion of my time has been devoted to ascertaining the state of the harbours and the pilotage connected with them.”

He said he felt Dartmouth would be best positioned – but added he had not surveyed the Bristol Channel yet, and so was instructed by MPs to head west and do so.

And it was this project that would end disastrously.

A report published in the Colonial Magazine and Commercial Maritime Journal in 1843 read: “While engaged on a survey of the Bristol Channel on 4 July, as four of the Elder Brethren of the Trinity House were in their steam packet inspecting the buoys in the Channel, they found it necessary to enter a small attendant boat in the course of their investigation. On their return the steamer cut the boat in two, and all of them were immersed in the water. Two saved themselves by swimming, viz Capts Probyn and Madan, but we regret to say the others, viz Capts Drew and Jenkin perished.”

From here, we move on and turn our attentions to the humble sea squirt.

This creature, found in the Coral Sea, was studied by the natural philosopher TH Huxley, who lived in the street that is our next stop, the nearby Marlborough Place.

Dubbed Darwin’s Bulldog, the biologist is responsible for the term “agnostic”, and his work helped the pursuit of science and reasoning.

Huxley, born in a small flat above a butchers, was the son of a schoolmaster at an evangelical institute.

In the 1830s the family settled in Coventry, and it was here Huxley’s world view was forged. Falling in with Dissenters, he threw himself into studying science and religion. It would lead to him spending a life challenging traditional orthodoxy.

In 1847, while sailing with the Royal Navy on a research trip in the Pacific, he noted that the larvae of the sea squirt had tail muscles like a tadpole. With this devastating observation, he extrapolated they were ancestors of vertebrates – creating another link in the evolutionary chain.

Huxley was full of wisdom and a fair amount of spiky wit: when he was awarded the Gold Medal by the Royal Society of London he complained that “it is all praise and no pudding”, referencing the lack of financial rewards. He also delivered a withering put-down to Samuel Wilberforce, the ultra-conserva­tive Bishop of Oxford, in a debate on evolution at a British Association for the Advancement of Science meeting in a 1860. Wilberforce, playing to the crowd, asked Huxley if apes were on his grandmother’s or grandfather’s side.

Huxley, quick as a flash and illustrating his anti-clerical and anti-privilege beliefs, responded: “I would rather have an ape as an ancestor than a wealthy bishop who prostituted his gifts.”

And on that philosophical bombshell, toodle pip for another week.