The BBC sitcom Motherland takes viewers to the very (school) gates of hell. ‘But I think you’d have to be a mother to write it,’ co-writer Barunka O’Shaughnessy tells Stephen Griffin 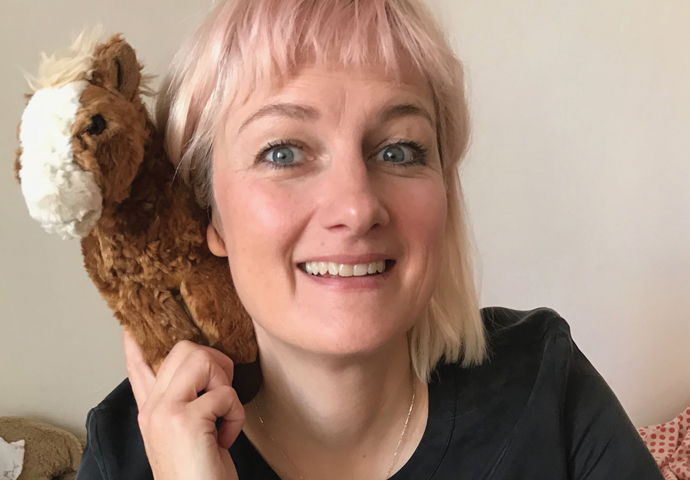 In the competitive bear pit that is showbiz it does no harm to stand out and perhaps be blessed with a singular name. And if Barunka O’Shaughnessy isn’t one of the best my name’s Sebastian Melmoth.

It’s a name you may have spotted as a performer in Spaced, Bo! In the USA, The Mighty Boosh or as Ping, Ed Reardon’s air-headed agent on Radio 4’s Ed Reardon’s Week. Or you may have seen her writing credit on the likes of the ravishing-looking Julia Davis period drama spoof Hunderby and more recently Motherland.

Given her comic credentials it comes as something of a surprise that she had little interest in comedy as a youngster. “In our household,” she says, “there were not many funny women. Very complicated women but not that funny.

“I became quite good at undercutting and deflecting, and eventually you go: ‘oh, I see: that’s a skill that can be applied professionally’.”

It was at Cambridge that the idea of comedy as a career evolved. “I didn’t consider it until I met other people who were considering it at quite an early age.”

Although she had no comedy heroes she admits to liking the more exotic, glamorous American comedies such as Rowan and Martin’s Laugh-in and the Valerie Harper sitcom Rhoda. “I don’t know that being a bit foreign it seemed a bit more accessible than British comedies because of the shared alienness.”

That “a bit foreign” reference relates to her parentage: her mother is Czech, her estranged father was Irish. Suffering from terminal throat cancer, four years ago he contacted her for the first time in 37 years… in order to track down her brother! “He died on March 1, 2015,” she told Cariad Lloyd’s Grief Cast podcast, “and my daughter Maud was born on March 31. It was a real one-out, one-in situation.”

But having a child, she says, has been essential when it came to co-writing Motherland, the BBC sitcom that chronicles the travails of (mainly) mothers attempting to juggle the pressures of parenthood with working lives.

“It was a joy to be asked to do Motherland,” says Barunka. She was invited to join the writing team for the second series after one of its original writers, Graham Linehan, was unavailable. “It’s quite an efficient business. There’s no sitting around in the writers’ room exchanging anecdotes, unless they’re relevant. So within two weeks we’d storylined six episodes. Then we split off into pairs and wrote three episodes each and then swapped them over.”

Very funny, Motherland also has depth. “That’s Sharon’s [Horgan, original co-writer] sensibility. She says: ‘I want the emotions and feelings to come first.’ It’s not the old producer thing that there have to be three laugh ticks on every page.”

So, how autobiographical is Motherland’s portrayal of competitive motherhood?

“It’s a bizarre, horrific world which weirdly I haven’t had a sense of because my child is quite young, she’s just started school. But I think you’d have to be a mother to write that show. There’s the whole conflict of emotions that didn’t mean anything to me when I didn’t have a child.”

And Motherland was something of a departure for her, she’s usually drawn to the warped.

“I prefer the weird and the dark. Maybe that’s my background. I came from a background of slightly twisted, horrific people and I’ve learned to deal with it by being ironic about it.”

She was therefore a shoo-in for co-writing Julia Davis’s twisted, horrific, filthy love letter to gothic literature, Hunderby. “Working with Julia Davis has been a highlight,” she admits. “That was a dream job.”

Credited initially as script editor, she started off helping to structure and develop the show but ended up co-writing and a Bafta nomination. “I get a bit involved and a bit excited about projects.”

Along with a third series of Motherland being recommissioned, a recent project was joining the vast writing team on the new Armando Iannucci series Avenue 5. “His process is very much like the American model: he has all these writers who write the episodes and then he has all these polishers and joke writers who add their bit. It’s so chaotic I don’t know how he manages to get a strand out of it.”

Now exiled to south London, Barunka – it means “tiny Barbara” – lived in Gloucester Avenue for 15 years. “It’s my spiritual home. I dream of living round there again. It was just a joyous time.”

Currently she spends more time writing than performing, although she’d like to perform more if it were not for the audition process. “It’s so humiliating. It’s quite a small industry and as you get to know directors and producers it’s a bit like going to a party and having to do a turn and going ‘hello everyone, judge me now’.”

She says that when she first went up to Edinburgh the only name female acts were Mel and Sue. So is it easier for women to be funny now?

“I hope so,” she says, adding that she feels commissioners do not question scripts enough. “I would tell you immediately where the women are missing and where their voices could be, how to make it instantly more egalitarian.