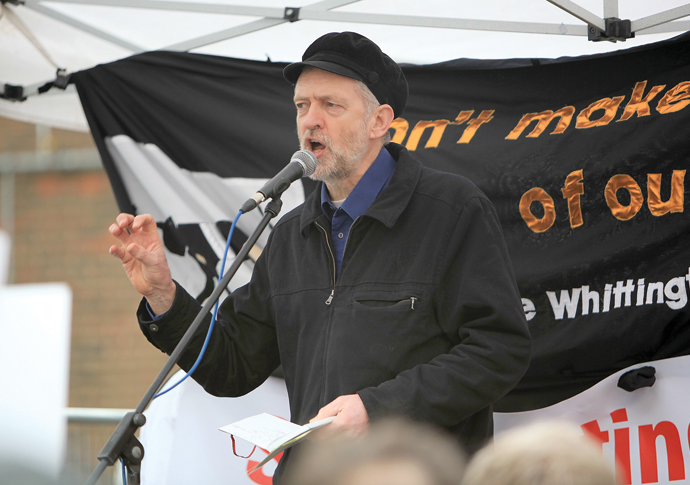 Jeremy Corbyn: ‘I hope to be the Labour candidate for Islington North in the next general election’

JEREMY Corbyn today (Friday) reveals his anger and frustration at being frozen out of the Labour Party, describing the now year-old decision to remove the whip from the former leader as “unfair and irrational”.

In an interview with the Tribune, the Islington North MP said he should be readmitted to the party which he was twice elected to lead.

Supporters staged demonstrations last Thursday to mark the first anniversary of the day the sanction was taken. The case was meant to be reviewed after three months but Mr Corbyn is still waiting for that to happen.

“I object to it very strongly on the grounds that the Parliamentary Labour Party has no business holding double jeopardy over me or anyone else,” he said. “Removal of the whip from me is unfair and irrational.”

Mr Corbyn, who has been the MP for his constituency for 38 years and never come close to losing his seat, was suspended after his reaction to a report published by the Equality and Human Rights Commission into the Labour Party’s handling of anti-semitism complaints; it had found evidence of discrimination and harassment and a failure to prevent it from happening. Mr Corbyn, at that time, said he wanted recommendations to be implemented but added that “the problem was also dramatically overstated for political reasons by our opponents inside and outside the party”.

He was later reinstated by the NEC – only to have the whip removed by Sir Keir Starmer, his successor as the national leader.

Mr Starmer, an MP in neighbouring Holborn and St Pancras, had been Mr Corbyn’s shadow Brexit spokesperson before his elevation to the top job. He has said Mr Corbyn should apologise for his comments.

But Mr Corbyn told the Tribune this week: “I was readmitted into the party, completely cleared by an NEC inquiry, and that should be the end of the matter. Let’s be clear: I abhor antisemitism in any form. The words I used were, ‘One antisemite in the Labour Party is one antisemite too many,’ and I stand by that.” 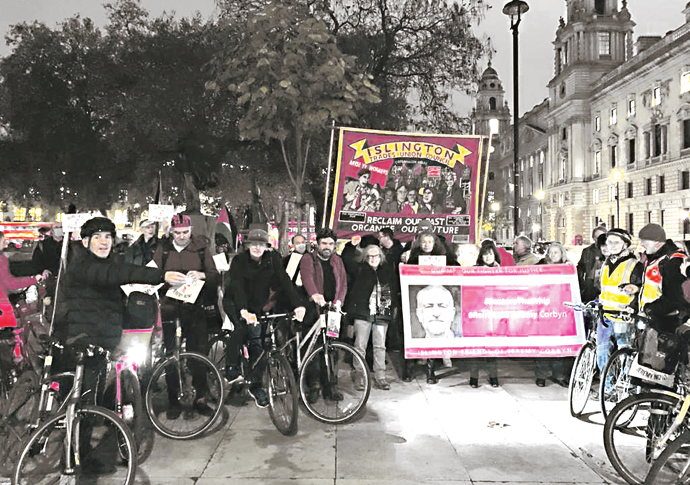 A three-month review period was promised by Nick Brown, the party’s chief whip – but he has since been removed from that post and Mr Corbyn sits as an independent MP in the House of Commons. He could potentially have to stand against a Labour candidate in Islington North to retain his place in parliament – should a general election be called.
Supporters say it should not come to that.

“In terms of being the local MP, it hasn’t made much difference at all,” said Mr Corbyn. “I cycle and walk around the constituency a great deal, I talk to lots of people and take up lots of cases.

“But what it’s meant in parliament is it’s a very strange situation. I still sit there in the chamber with various parliamentary friends, and I speak quite a lot on the environment, human rights and international issues.”

After stepping down as leader following the 2019 general election defeat, he has returned to the view from the backbenches and maintained a watchful eye over the government’s response to the Covid crisis.

“I sit at the back in the chamber. Indeed, exactly where I sat before I was leader of the party,” Mr Corbyn said. “I think too often we’ve given the government the benefit of the doubt on Covid and we’re not clear enough about an interventionist economy for the future.”

A combination of sleaze allegations and what has been described as a “shambolic” speech to business leaders this week means prime minister Boris Johnson has recently taken a hit in the polls.

“It is an opportunity to present a complete alternative to Johnson’s swashbuckling, ill-informed, ill-prepared approach to government,” Mr Corbyn said. “Johnson has got away with it for a long time. It’s not really working for him so much now, so we have to have an alternative.

“It’s not just about competence, it’s also about the fundamental message. Johnson essentially offers a Thatcherite model, but he’s not as miserable as Margaret Thatcher was.”

“It’s Labour’s opportunity to offer a [vision] of economic justice. That means investment. Johnson fought the election campaign on essentially saying he’d level up the country with investment in the north as much as the south.”

But Mr Corbyn said Mr Johnson was now retreating on his pledges.

“We also pointed out that levels of regional inequalities in Britain are enormous,” he said. “But Johnson has now gone back on all that with the investment strategy that he’s announced. So it is up to us to put forward a credible, clear alternative, and I think we’ve missed too many opportunities to do that.”

Mr Corbyn has said a spate of suspensions from the Labour Party is “demoralising”, citing Pamela Fitzpatrick’s case. Ms Fitzpatrick was suspended from the party following an interview with the left-wing media outlet Socialist Appeal. When rules were changed to make it forbidden, the sanction was applied retrospectively to Ms Fitzpatrick’s interview.

“It’s counterproductive because it demoralises the party, it demoralises members as well, at the very time we need members to be active,” Mr Corbyn told the Tribune. “Some of our councils have achieved great things. For example, Islington on building houses, environment, [and] sustainability. But you need to motivate party members.”

He said he still hopes to return to the Labour Party.

“A lot of constituents keep coming up to me in the street, whenever I walk down the road the issue [of suspension] comes up and they say it’s completely unfair,” he said. “I hope to be the Labour candidate for Islington North in the next general election.”