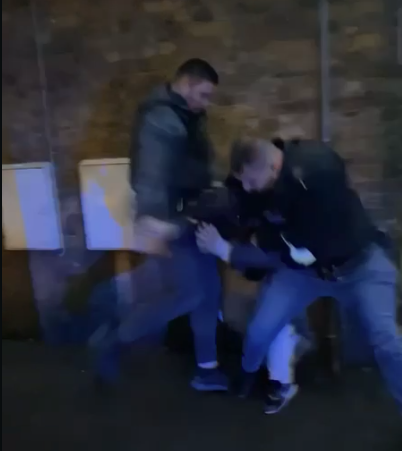 Footage of the incident has been shared online

A TEENAGER fell unconscious and had to be admitted to hospital after a police stop-and-search incident.

The 17-year-old’s mother has filed a complaint over the treatment towards her son by officers in St Pancras Way, Camden Town, on Sunday night.

Ana Santos sent the New Journal footage of the incident which she says left her son bruised and bloodied before passing out on the way to University College Hospital.

The Met said that officers had deployed “knee strikes” during the stop.

It said a female officer suffered “suspected ligament damage to her knee” while the boy “physically resisted” being “detained”.

Police said there was suspicion that somebody could have been carrying a knife but confirmed that no weapon was found.

Ms Santos, who lives in Kentish Town, said: “The more children get dealt with like that, the more they will revolt. Kids are going to grow up with no respect for the police officers. It takes their confidence away. Do they understand that? Surely they don’t have to kick him like that. It’s ridiculous, and I feel it is not just my son that has experienced this.”

The mechanics student has lived in Kentish Town all his life but his mother said he now does not feel safe to go out anymore after getting stopped on Sunday.

“He is 17 years old and it’s only in the last few months police have been stopping him on the road and going into his pockets,” she said.

The Met said the boy “ran from” the police after being stopped and that he injured the woman officer who caught up with him.

Police confirmed nothing was found during the search of the small group of teenagers.

The boy was not charged with any offence.

Ms Santos said: “If my son pushed a female officer, is this a reason for an officer to kick the way he kicked? He was a big man kicking. The police asked to go through the boys’ pockets. Nothing was found on my son or the other kids. But this was brutal.

“He was bleeding from his face and he went unconscious on the way to the hospital. He has got injuries on his face. His face was really swollen. The left side of his face is all bruised. She added: “His nose is cut. He has asthma and he was struggling to breathe.”

A statement from the fair policing campaign group Stopwatch said: ‘There ought to be no circumstances under which unarmed individuals are subjected to physical strikes during police stops – less still children – and it be seen as anything other than excessive use of force. There are surely less combative ways for police to conduct a search.”

Last week the New Journal reported on new knife crime orders being trialled in Camden. The Knife Crime Prevention Orders will give the Met the power to ban people over the age of 12 from going to some areas and meeting certain people. Strikingly similar to ASBOs, the new orders can be served even if an individual has no criminal record.

Breaking the rules can lead to prison sentences, however.

Its response said: “Police were called to St Pancras Way, at 9.01pm on Sunday following reports that a male had been seen carrying a knife. Officers attended and as they arrived, one male ran from them. They gave chase for a short time and one officer caught up with the male in nearby Wilmott Place. As she attempted to detain him, he physically resisted, injuring the officer and causing suspected ligament damage to her knee.

“Other officers arrived to assist and the male continued to resist. The officers used force to restrain him, including knee strikes. Once restrained, the male was arrested on suspicion of assaulting a police officer.

“A knife was not found. The male was taken to hospital for an assessment and was found to have superficial injuries sustained while he was resisting the officers’ efforts to detain him.

“He was discharged shortly after 1am and taken into police custody.”