Mortimer Terrace: Nursery plan for nature reserve – but green space is up for auction 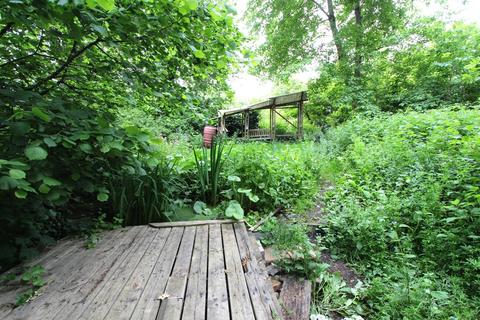 A NATURE reserve is due to be auctioned to the highest bidder next month – as its owners struck a five-year deal with a nursery to run outdoor classrooms on the site.

The Mortimer Terrace Nature Reserve in Kentish Town had been owned by the Fitzpatrick family construction firm for more than four decades. They sold up to property company Silverton in 2020.

Silverton’s owner, Mark Hamburger, put the land up for auction after discovering it was well protected from development – but after failing to reach the £200,000 asking price, Mr Hamburger withdrew the lot.

Now the New Journal has learned the site will be once more under the hammer in February – and this time includes the lease to a nursery, set at £18,000 a year.

Woodentots Nursery has been based in Kentish Town for over 30 years and plan to host an open air classroom on weekday mornings.

They will then hand the space over to state-run primary schools to access the wooded area in the afternoons.

Woodentots founder Paula Woodman said the plan would safeguard the reserve from development, offer free access to children, and reduce pressure on Hampstead Heath, which has seen a huge rise in school visits.

She said: “I approached the Fitzpatricks when I knew the Nature Reserve tenancy was coming to an end. They had given it to the community for 30 years before – the Fitzpatricks acted generously for all that time.”

After failing to agree a price, Ms Woodman watched the auction carefully – and after the lot was withdrawn, was approached by its new owner offering a lease.

Ms Woodman said: “We ran Forest Schools, long before it was a ‘thing’. We used to call it nature walks. We have been using the Heath for many years, but have been told there are simply too many Forest Schools now.

“It makes sense to have an independent space. I think we could take this to the next level. It would be great to create a basecamp, full of resources for children from a number of schools to use.”

She added that she hoped to win the support of neighbours and nature reserve volunteers.

She added: “Using the reserve for nature lessons is not about making money, just paying the rent.”

The Mortimer Terrace Nature Reserve trustees say they are open to speaking with Woodentots.

Committee member Emily O’Mara said: “Our priority remains the same as it has always been – to ensure the space is accessible to all, is looked after, and never developed.

“We want everyone to be able to use it regardless of whether they are a child at a private nursery or in a state school.

She added: “The reserve is still under private ownership and with that, there is always the fear that it will be used for something else.

“The bottom line is we must get it open for community use, free of charge and safeguarded in perpetuity.”