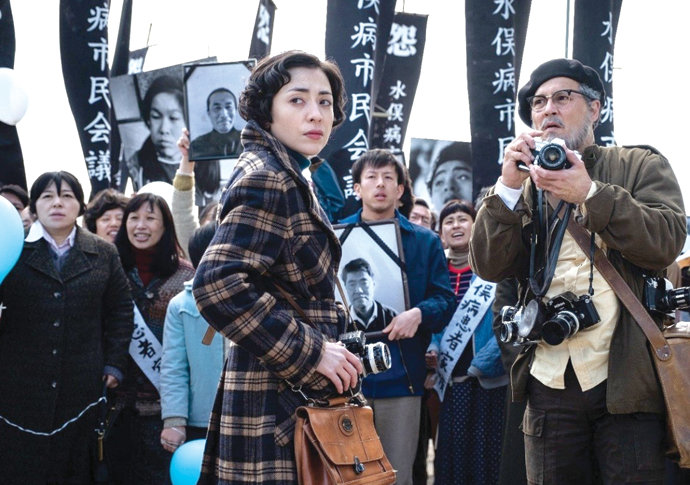 AS the final credits roll, a depressing parade of industrial disasters appear. While place names like Chernobyl, Bhopal and Deepwater Horizon have global resonance, the scandal at Minamata, Japan, is less well known.

Sadly, as the roll call after the story has been told reveals, the scandal that saw a major chemical company spend decades pouring mercury directly into the sea, causing death and disability, has been repeated with frightening regularly.

It means for all of the flaws of this Johnny Depp vehicle, it shouts from the rooftops an important message.

W Eugene Smith (Depp) was a freelance photographer whose work was coveted. He made his name in the Second World War, where he witnessed the battle for the Pacific. By the early 1970s, he feels washed up, rowing with the editor of Life magazine (Bill Nighy), drinking too much and slobbing out in a bedsit that’s also his dark room.

A visitor arrives from Japan – Aileen (Minami) tells him about the town of Minamata, home to the Chisso chemical company. She believes if he travels to Japan, he will give crucial publicity to the campaign to stop the firm. Perhaps it will also revitalise his faith in the power of photo­journalism and face up to the wartime ghosts that haunt him.

On an artistic level, Depp’s portrayal is an overloaded cliché – the grizzled war-reporting veteran, mired in alcoholism to stave off post-traumatic stress. He channels his Hunter S Thompson too readily, looking more cool than troubled as he puffs at a roll-up.

There is also a swagger that makes it feel like an old-school Western with the white man riding in to save the put-upon villagers.

The costume depart­ment has gone full-on panto – W Eugene is decked out in a Che beret and army fatigue shirt, the Malcolm X glasses and slightly off fake beard. Depp looks like he’s going to a fancy dress party as a war reporter. It’s a bit of a distrac­tion, especially as director Levitas has managed to shoot the film so well, drawing on Eugene’s style as a starting point as to how it looks.

Regardless of the flaws, this takes the most important topic facing us today – our relationship with the earth that supports us – and builds a solid and watchable personal narrative.