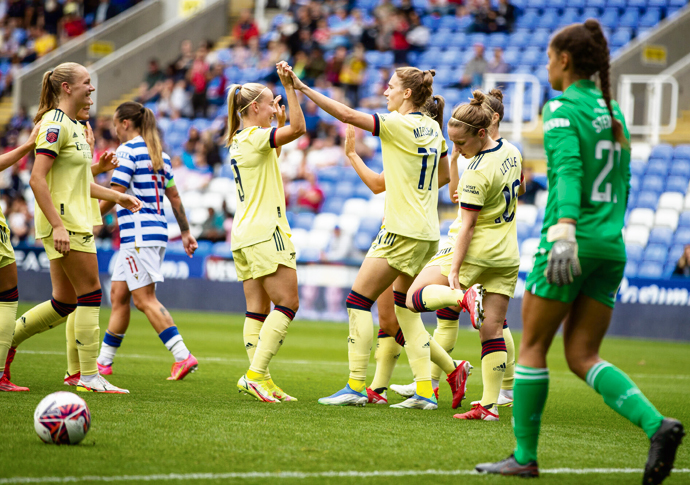 NOT content with hitting the 100-goal mark for Arsenal after a hat-trick against Slavia Prague in the Champions League in midweek, hotshot Vivianne Miedema added two more to her tally with victory over Reading in the Women’s Super League on Sunday.

Of course, the Gunners have rarely been short of top-class strikers, from the prolific Marieanne Spacey in her pomp to Lianne Sanderson, who notably bagged 91 goals in two seasons when she was barely 20 years old.

But Dutch international Miedema is special in this professional age.

Thankfully, the 25-year-old also remains grounded despite the plaudits, admitting that she had felt “awkward” in the celebratory team huddle out in Prague.

“They were all clapping me and saying congrats,” said Miedema.

“I’m trying to just move on and enjoy it, but that’s the reaction from my teammates that I appreciate.”

There has been much to admire in the performances of Miedema’s fellow 2017 signing Beth Mead this season, too.

The 26-year-old was the architect of Arsenal’s 4-0 win over the Royals at the Madejski Stadium, scoring one and then setting Miedema up for two.

That made it four goals and six assists in six for the former PFA and England Young Player of the Year, who is now in camp with her country for upcoming World Cup qualifiers.

“I don’t expect anything less than what she’s doing right now because, honestly, someone who puts that much hard work in will always see the results, I firmly believe in that,” she added. “And you can see that’s the case with Beth, she’s been ‘balling out’ and I’m beyond happy for her.”

The Gunners’ new boss, Jonas Eidevall, is still getting to know Mead, but in his post-match press conference he described her as a “positive surprise”. He added: “I hope she can keep her form now when she gets the England shirt on to show she is a great player on a national team level as well.”

Nikita Parris and Leah Williamson are also in the England squad to face North Macedonia in Southampton tomorrow (Friday) and Luxembourg away on Tuesday.

TWO OUT OF TWO

The debate over goalline technology and video assistant referees in the women’s top-flight was further fuelled at the weekend, this time by Spurs’ shock 2-1 win over Manchester City on Sunday. It was the first time a visiting team had taken all three points from City in the league since April 2018 – a whopping 33-game unbeaten home run.

Lauren Hemp opened the scoring for City before Tottenham levelled through Rachel Williams. But their 86th-minute winner looked to have been handballed by Rosella Ayane before being inadvertently helped in by goalkeeper Karima Benameur Taieb.

It was an imperfect goal that maintained a perfect start to Rehanne Skinner’s first full season in charge of Spurs – not that the manager is getting above herself.

“We know it’s a marathon not a sprint,” she said afterwards. “I’m not that person that’s going to get carried away with anything off the back of two wins. We’ve still got work to do.”

Emma Hayes’ Chelsea, meanwhile, trounced Everton 4-0 in a match screened live on BBC2 and attended by more than 2,300 fans at Kingsmeadow.

Former Arsenal boss Joe Montemurro will return to London in this winter’s Champions League group stage. But his new side Juventus will face Chelsea, not the Gunners, who were drawn against holders Barcelona and debutants Hoffenheim and Koge.