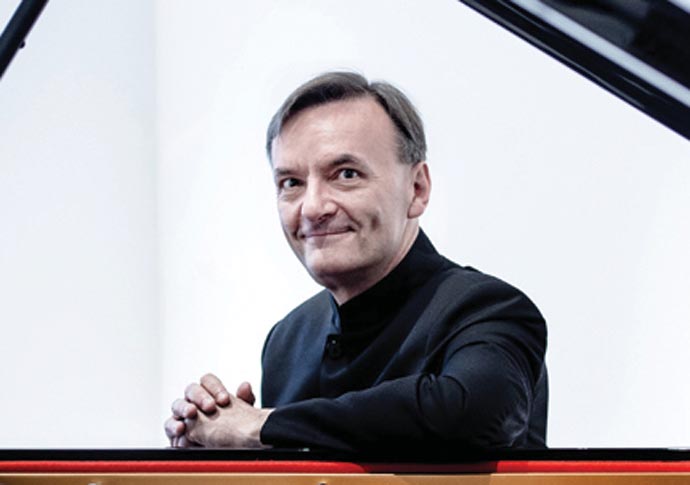 STAR performers like the pianist Stephen Hough are never short of life-events that qualify as “seminal”. But Hough has one of more than usual significance next month: he’s turning 60. Nobody would know, because he doesn’t look it (honest Stephen) – though the truth is out next Wednesday when he commands the stage of the Festival Hall for a 60th birthday concert.

It’s a solo recital, just him and his Steinway. The programme includes Chopin, a composer on his mind of late with the issue of a new disc of Chopin Nocturnes on the Hyperion label. But there’s also a piece of his own, because Hough is a composer as well as a performer. And in truth, there’s not much he isn’t – being a painter, novelist, poet, spiritual polemicist and other things into the bargain. The simple word for him is polymath, but Renaissance Man isn’t far off the mark either.

If you’re curious about his spiritual polemics, they concern the fact that he’s a prominent Catholic but also a high-profile gay man who has confronted the church with the cruel nonsense of its objections to homosexuality. And of all those arguing for change, nobody does it more eloquently.

But then Hough is one of the most eloquent of pianists too, known for the clarity and brilliance of his playing. Having lost a lot of concerts to the past year of pandemic, including a tour of Australia and the Far East that should have happened recently, it hasn’t had too many opportunities to shine of late. But this big Festival Hall concert should offer some kind of compensation. southbankcentre.co.uk

• It just so happens that Hough’s friend and collaborator, the cellist Steven Isserlis, also has a notable event this week: the launch of his new book about the Bach Cello Suites, with a lecture-concert at Wigmore Hall, 3pm Sunday. He plays the music, actor Simon Callow reads the words. If you’re under 35 you get in for £5. And it’s also being streamed on the Wigmore website – where you can watch the thing live or catch up later. Pretty civilised. wigmore-hall.org.uk

• Running a choral society is a balancing act – ensuring that your singers (and your audience) get plenty of the repertoire they know and love, but also stretching them with repertoire they don’t. And David Temple, who runs Crouch End Festival Chorus, has the balance of a tightrope-walker – hence the CEFC concert this Sunday, 3pm, at Alexandra Palace Theatre. It majors on the Mozart Requiem, a piece that even students on University Challenge (who answer arcane questions about nuclear physics but go quiet on classical music) could probably whistle. But there’s also the world premiere of a piece by Jessica Curry, a composer best known for writing soundtracks to computer games but here producing something more personal in that it relates to her own traumatising experience of lockdown – unable to visit her own father as he died, in quarantine, in a hospice. Expect music from the heart. cefc.org.uk

• Other highlights of the week include a Barbican recital by the dazzling America soprano Joyce DiDonato (Tuesday, barbican.org.uk) and a Royal Opera revival of its longstanding Traviata with Lisette Oropesa and Christian Gerhaher (from Weds, roh.org.uk). But for listeners who like to get involved, there’s also a St Matthew Passion on Thursday that invites the audience to join in the chorales – so long as you arrive early to rehearse! What’s more, it’s a chance to explore the otherwise hidden chapel of King’s College London in the Strand. Details: scherzoensemble.com