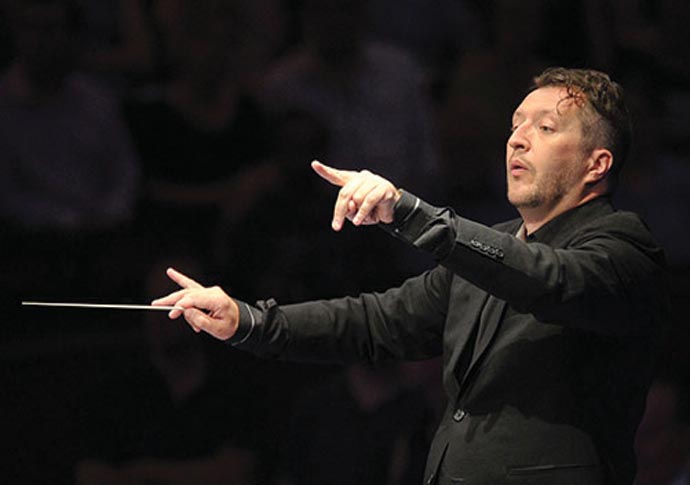 BORN in Highgate, sent to school at UCS in Hampstead, Thomas Adès is a product of north London who has taken on the world as one of its pre-eminent composers. And though not always a fan, I’ve certainly felt privileged to follow his career from early on – when word came out of Cambridge that there was an student genius at King’s of such precocity he made his tutors feel intimidated.

Since then, works of stature have poured out of him, in such a steady flow it’s generated little sense of passing time. So it was a bit of a shock to realise that this month he turned 50: an occasion marked by a birthday concert that goes online from 7.30pm, March 28.

It features Adès conducting the LSO in Sibelius’s 6th Symphony, which is worth watching because Adès conducts as only a composer can – from inside the score, with an illuminating sense of how it works. But more especially he conducts his own In Seven Days: a reflection on the Biblical creation myth packaged as a piano concerto, which premiered in 2008 with accompanying visual effects by Adès’ then partner, the video artist Tal Rosner.

Whether you get the visuals on Sunday I’m not sure, but you certainly get the outstanding Kirill Gerstein as soloist; and no one plays this dazzling if formidably demanding piece with more authority. Accessible, free, at youtube.com/user/Lso

It’s going to be a long while before London’s concert life returns to normal; but a hopeful sign is that the Albert Hall is edging toward functionality with a new series of (still only online) concerts by the RPO. The first is available now, with conductor Vasily Petrenko, who becomes the orchestra’s next music director in August, and the popular if ubiquitous saxophone soloist Jess Gillam. Programme includes Brahms and Villa Lobos. £10 tickets from rpo.co.uk

• Next week is Holy Week, which would ordinarily be filled with choral concerts; and it’s hard to believe that here we are, a second Easter with no live communal singing. How much longer?

But if you won’t get to sing a Bach Passion, you can at least experience some classy choral music online when the elite vocal group Tenebrae present a pared-down version of the annual Holy Week Festival at St John’s Smith Square, starting this Sunday. Highlights include Allegri’s Miserere on Wed 31, and Tallis’s Lamentations of Jeremiah on Maundy Thursday. Details: sjss.org.uk/holy-week-festival

And if you’re really missing those Passions, you can watch Tenebrae sing extracts from not only Bach’s St Matthew but from Schutz’s earlier version – livestreamed from Wigmore Hall, 7.30pm, March 30, with free access on the Hall’s website. In fact the Wigmore is firing with all guns right now; and the same day, March 30 at 1pm, it livestreams a free performance of Pergolesi’s Stabat Mater, featuring star soloists Carolyn Sampson and Iestyn Davies (there could be no better) with the period ensemble Arcangelo. An absolute must-hear, available on demand after the initial streaming. Details: wigmore-hall.org.uk