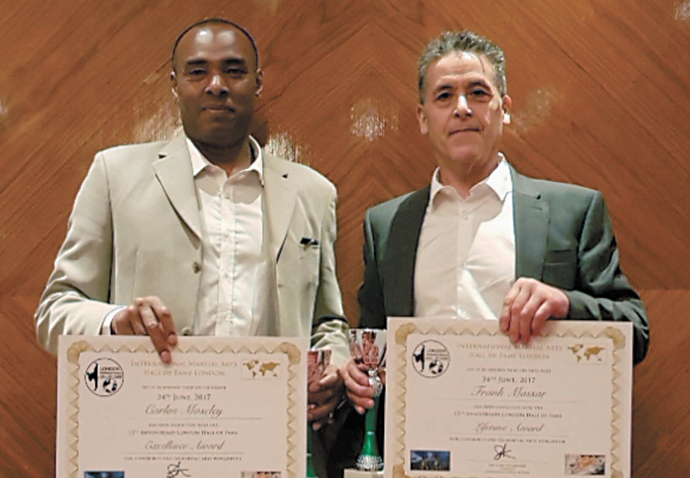 GRANDMASTER Frank Massar says he feels “proud and honoured” after being recognised for his ongoing contributions to martial arts.

The 59-year-old, who has been training in various disciplines for over 50 years, was presented with the Lifetime Achievement Award at the London International Hall of Fame gala night, which was held in Kensington recently.

Frank runs his academy, Massar’s Martial Arts, out of the Somers Town Community Sports Centre in Chalton Street on Wednesdays and Sundays.

The ceremony at the Copthorne Tara Hotel also proved a big hit for two of his students. Master Carlos Moseley received an Excellence in Martial Arts Award, while osteopath Darren Chandler was honoured with a Practitioner of the Year Award for all his work keeping martial artists fighting fit. All three received special rings, trophies and certificates.

“I’m very happy and grateful that organiser, Grandmaster Gary Wasniewski, honoured all three of us for our contribution and services to the martial arts world,” said Frank.

“It was a great event, featuring some of the best martial artists from around the world. Part of the night was also to raise money for Cancer Research, so to be apart of it was fantastic.”