Marching to a different Dune 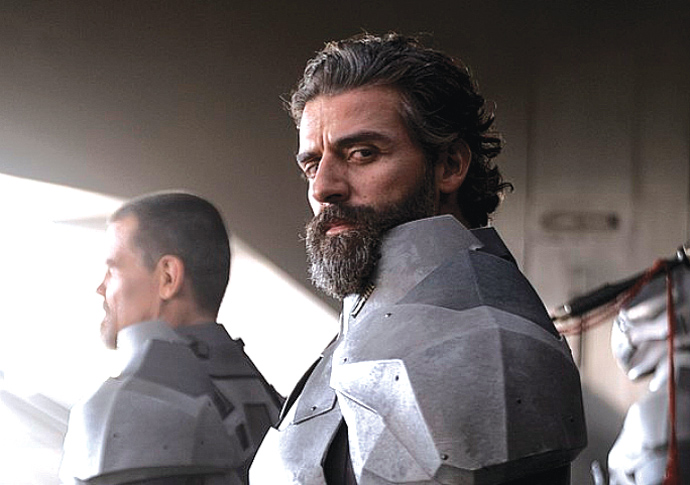 FRANK Herbert’s 1965 novel Dune, which runs to 510 pages complete with maps, was something of a challenge for sci-fi fans to say they’d completed: like a geek version of Ulysses or a space age Gormenghast, it was challengingly impenetrable.

Director Denis Villeneuve’s first triumph in adapting Herbert’s work to the screen is by simplifying characters, making the narrative more obvious and pacing the plot by giving the viewer some background before quickly cutting to the chase. It helps keep interest levels high.

The world of Dune – this lengthy film is part one – exists in a weird, quasi-medieval place that marries recognisable historic cornerstones (dukes and serfs, castles and sword fights, birth rights and alliances, chivalry and conspiracy) with the far, far future. The story runs along lines that would be familiar to historians of the Houses of York and Lancaster.

The galaxy is ruled by the Imperium, made up of a number of hereditary groups.

Duke Atreides (Oscar Isaac) has been ordered to decamp with his city to the planet Dune: a place where Spice, a raw material, is mined. It’s the most valuable thing going and Duke Atreides knows his rivals, the House Harkonnen, have recently evacuated the planet after 80 years of Spice harvesting. He senses a trap…

His heir, Paul (Timothee Chalamet) meanwhile is having strange dreams of the planet and a mysterious woman Chani (Zendaya), who is a member of an indigenous tribe called the Fremen. Added to this, his mother Jessica (Rebecca Ferguson), a follower of a cultish, mystical sisterhood, believes her son is the Messiah.

Off we race with this crash course in Dune politics and religion, setting the scene for a superb-looking space adventure.

Swords are drawn, secrets betrayed, giant worms appear from beneath the sands. Packed with parables ranging from Judeo-Christian legends to Nazis, Vietnam, oil and wars in the Middle East, there is relevance to today hidden in each scene.

If there is a moment Villeneuve’s exceptional direction falls behind, it is how this astonishing technical achievement in a way covers up the feeling that these characters, for all their winsome looks into the near distance, are less three dimensional than the space ships and sand dunes they stride around on.

It’s a grim future predicted by Herbert. His humans have developed extraordinary technology, but haven’t sorted out equality and meritocracy. A sad indictment of our species.