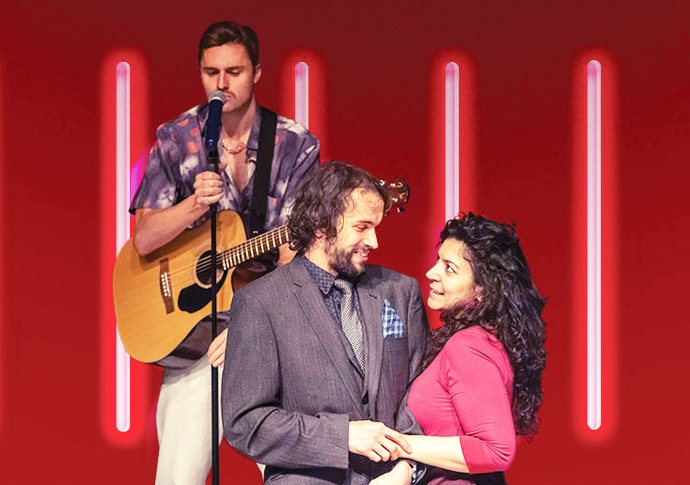 The Rubber Merchants is at the Old Red Lion

WALLY Sewell’s Power Luncheon is at the Hope Theatre from Jan 11-29. Between them, Winston Churchill and George VI satisfy Shakespeare’s paths to greatness. Both are born into privilege and influence, one by personal ambition achieving the position of prime minister and war leader, the other by circumstance, finding himself in the position of monarch. During the Second World War they meet for private luncheons to discuss affairs of state. Sewell imagines three of these meetings, in 1940, 1943, and on D-Day 1944. thehopetheatre.com

• The Rubber Merchants, a 1970s play by Hanoch Levin, is at the Old Red Lion Theatre from Jan 11-29. Three friends weigh up their lives. Yohanan, Bella and Shmuel have average-sized dreams. They want sex, money and love. But is playing it safe really the best way to go about turning their dreams into a reality? Gamayun Theatre recalibrate Levin’s tragifarce for a 2022 audience. oldredliontheatre.co.uk

• Kate Reid’s The 4th Country, about contemporary life in modern Northern Ireland, is at Park90 from Jan 11-Feb 5. For Niamh and Conor, life in Derry-Londonderry in 2019 isn’t all leprechauns, Riverdance and whiskey. parktheatre.co.uk

• The London International Mime Festival (LIMF) opens on Jan 12 at the Lilian Baylis Studio with the world premiere of Gandini Juggling: LIFE A Love Letter to Merce Cunningham, presented, in partnership with Sadler’s Wells, and on until Jan 15. Sean Gandini and Kati Ylä-Hokkala have created an original work firmly rooted in the Cunningham universe. The soundscore is by Pulitzer Prize-winning American composer and vocalist, Caroline Shaw. Theatre Re’s Bluebelle is at Shoreditch Town Hall from Jan 13-16. Long ago a king and queen were placed under a spell and fertility was disrupted. Weaving together plots and characters from ancient folktales collected by Angela Carter, Italo Calvino, the Brothers Grimm and Charles Perrault, Bluebelle is about life and how to protect it. LIMF runs until Feb 6. mimelondon.com/festival

• A Fight Against…(Una Lucha Contra…) marks the English language debut of one of Chile’s most significant new voices at the Royal Court’s Jerwood Theatre Upstairs until Jan 22. Pablo Manzi’s darkly comic odyssey across the Americas explores whether violence brings us closer together and what it takes to make a community. royalcourttheatre.com

• It’s your last chance to catch Trouble in Mind, Alice Childress’s radical satire of racism in theatre in 1950s America, at the Dorfman Theatre until Jan 29. Wiletta Mayer, a black actress, begins rehearsals on Broadway for a new play about racism – written and directed by two white men. When Wiletta finds that she’s unable to tell the truth of the story, she decides to take action. nationaltheatre.org.uk