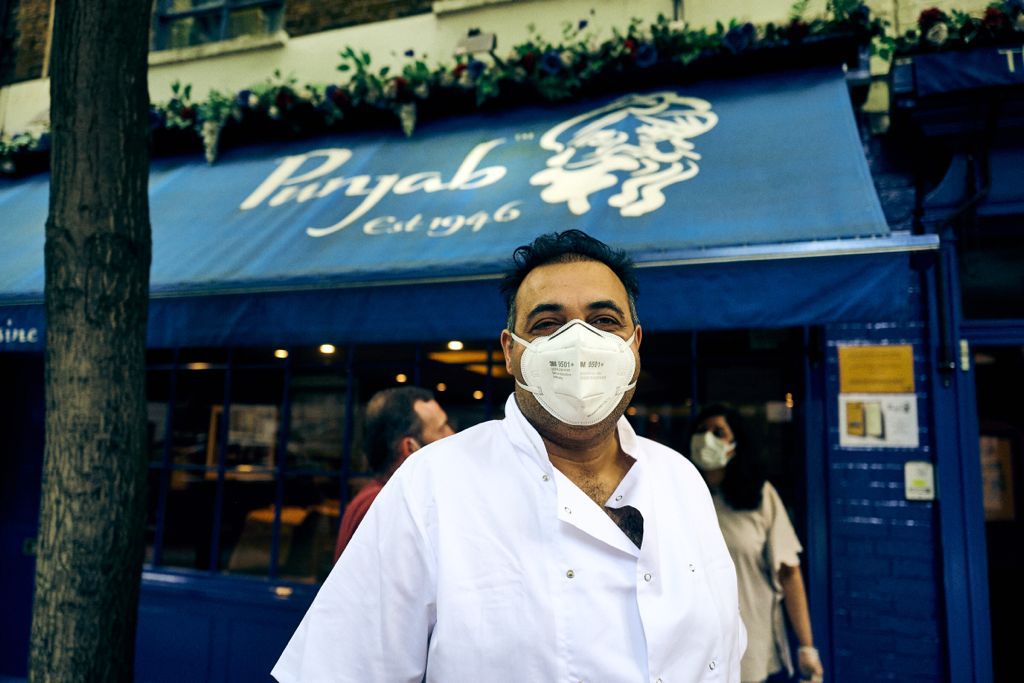 THE cliché that not all heroes wear capes applies to Amrit Maan, who prefers to don chef’s whites and cook up thousands of award-winning curries from his family owned restaurant.

Now Mr Maan’s extraordinary work for a range of groups and individuals has been recognised – the Covent Garden-based restaurateur and solicitor has been awarded an OBE in the New Year honours list.

It is estimated that over the decades, projects run by Mr Maan and his family restaurant The Punjab in Neal Street have given away around £1million worth of food.

And during the past 18 months, he and his colleagues furnished the New Journal with thousands of delicious curries to distribute to vulnerable people, hospital staff, food banks and others.

On top of this, Mr Maan’s legal training has seen him work pro bono for those who cannot afford representation and who he believes have suffered injustice.

Mr Maan told the New Journal: “At the start of 2020, there was a horrible feeling we were going to have to lock down like they had in China. I didn’t want to close the restaurant, so we cranked up the outreach and support work we had been doing over the years.”

He kept his staff on – a number formed an isolation bubble and lived above the restaurant in the family home so they could continue to work – and began to cook curries on an industrial scale.

At first, he used his own resources, but as other caterers shut down, he was given fridges full of ingredients to use from other businesses, and then began fundraising to help meet the spiralling need.

Working with homeless charities such as Under One Sky, and St Martin-in-the-Fields church in Trafalgar Square, The Punjab was transformed from a cosy eatery into a food distribution hub. Other groups such as asylum seekers, Sikh temples, Jewish groups, Muslim charities, the Church of England, community centres and food banks were stocked up.

Mr Maan said: “The Punjab is an institution for many, but it is also an asset we could put to good use. We have an industrial kitchen, lots of know-how, and my team are brilliant – real heavy lifters.”

His altruism and drive has been passed down generations, he says.

Mr Maan’s great-grandfather, Gurbachan Singh Maan, moved to London from the Punjab in 1936. Settling in the East End, he was a travelling salesman.

“He moved to Aldgate and became integrated in the East End Jewish community,” said Mr Maan.

“He would buy clothing wholesale off Jewish businesses and travel to sell them. If he was away from London, the tailors would put products on trains for him to collect at regional stations. He was a real charmer and a bit of a lovable rogue – there was a touch of Arthur Daley about him.”

But as well as his business acumen, the original Mr Singh Maan had a strong sense of community. He recognised the struggles minorities faced and worked hard to help, just like his great-grandson.

Mr Maan said: “He understood the pressures the Jewish community felt, he saw and fought against the rise of anti-Semitism and, above all, he was passionate about bringing people together. Our family like to think his influence has carried on down the line.”

An excellent cook, Mr Maan’s great-grandfather set up his first restaurant in the East End in 1946.

Mr Maan said: “The demand was incredible and friends persuaded him he should open a restaurant in Soho or Covent Garden.

“He eventually chose Covent Garden because it was closer to the India High Commission at the Aldwych – and we have remained open ever since.”

The family lived upstairs and it has helped cement The Punjab as a centre for the Covent Garden community.

Mr Maan, who is the fourth generation to run the restaurant, added: “My family are old-school – we love and care about our neighbours. I have connected with some amazing people, people full of compassion, care and love.”

His honour also recognises his work within the Sikh community, the emergency services and the British army.

“I am a lifelong supporter of the British Punjabi community,” he added. “The two countries have a shared past and a shared future.

“I am a Covent Gardener first, and then a British Punjabi.

“I know my great-grandfather would be very proud. I think this work has been the culmination of his ethos.”