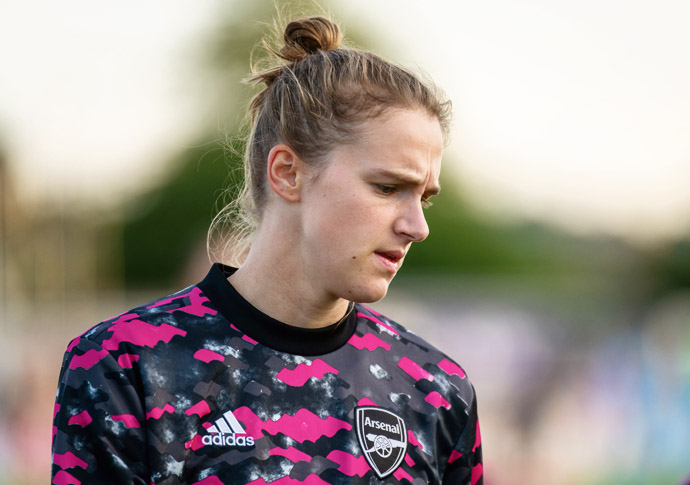 The Netherlands forward, who recently celebrated a century of goals for her club, has now bagged four in three WSL matches this term.

Coming in the wake of an Olympic record 10 goals in Tokyo over the summer, and with a handful under her belt for Arsenal in the Champions League already, the 25-year-old is on a hot streak.

And the two-footed marvel believes that some of that is down to time spent working on her fitness in a park in Scotland with her partner and fellow Gunner Lisa Evans while in lockdown last year.

“It was the first time I’d had a break in five or six seasons, and the moment you have a break you start realising what you’ve done right, what you’ve done wrong,” she told the New Journal.

“When lockdown hit I was a bit tired of football. We’d had a lot of injuries at the club – we could never really train up to a high level because we were always scared that if we lose more girls we won’t have players at the weekend.

“It was just really good for me to finally have time to work on a couple of things, mentally and physically. I started realising what I could add to my gym programme, my normal training programme, to be able to play three games a week.

“Coming back into the normal football situation with Arsenal, I added that to my programme together with the strength and conditioning guys and physios and it’s helped me through last season and I’m still standing right now, so it’s definitely helped me from a mental and physical perspective.”

Goals from Miedema, Katie McCabe, Leah Williamson and Kim Little, with a double, saw Arsenal cruise past City to move into top spot in the WSL.

Head coach Jonas Eidevall praised his team afterwards, but he also hailed a familiar face from Arsenal’s past.

Gary Lewin was the men’s first team physio for 22 years, working under George Graham and Arsene Wenger before joining the FA full-time in 2008.

He has worked as a consultant to the Gunners’ women in the past, but in July he was appointed to their new head of sports medicine and sports science role, based at London Colney. And Eidevall already appears to view Lewin’s appointment as a game-changer as Arsenal chase trophies on four fronts this season.

“We talk a lot about our signings on the pitch,” Eidevall said. “But talk about one off the pitch: Gary Lewin, and the work he and all the other staff do with the players to keep them fit and fresh between the games.

“That’s a huge one for us. You can have all the players in the world, but if they’re not available for you it doesn’t matter, and so far that has been great.”

Lewin’s expertise will be tested to the maximum this week, as Arsenal follow last night’s (Wednesday’s) FA Cup quarter-final against Spurs with a visit to Aston Villa on Saturday in the WSL and Barcelona away in the Champions League on Tuesday.

Unbeaten Spurs are second in the WSL on goal-difference after Jessica Naz’s goal secured a 1-0 win over Reading.

Meanwhile, Emma Hayes told the press that she was expecting a “close game” as her side travelled to Manchester United at the weekend. It was anything but, the former Parliament Hill School pupil overseeing a 6-1 win for Chelsea, who moved up into fourth in the table.