Local lads kicking off ahead of the big boys 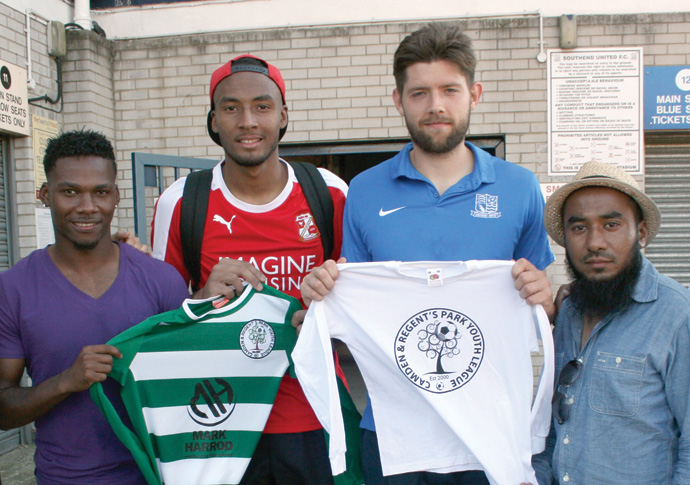 THE new Premier League season is just over a week away, bringing with it the hopes, dreams and expectations of millions of fans across the country.

If, however, your excitement has already been dampened by your favourite player leaving, the news that goalkeepers now cost £65million, or a fear that Manchester City will again monopolise the title, then there is a great alternative: support some of your own.

The lower leagues return to action this weekend, and hidden away in fixtures all too easily missed on the vidiprinter will be the names of scores of talented footballers who will be flying the flag for Camden and Islington.

In the Championship striker Aiden O’Brien, who grew up in Islington and regularly played for Isledon Wolves, will be looking to fire Millwall to a winning start when they entertain Middlesbrough on Saturday. Former Peel star and now Millwall defender Mahlon Romeo, who grew up in Westminster and went to school in Hampstead, is also expected to feature.

Forward Mo Eisa will be looking to find the back of the net when he makes his Championship debut for Bristol City against Nottingham ­Forest. The 24-year-old, who grew up in King’s Cross and played for Islington-based Pro Touch Soccer Academy for over four years when he was a kid, earned his summer move to the Robins after scoring 25 goals in 50 games for League Two side Cheltenham Town last season.

Mo’s younger brother, Abo, who also featured for Pro Touch, will also be aiming to start the new campaign with a win when he lines up in ­midfield for League One side Shrewsbury Town against Bradford City.

Millwall’s Aiden O’Brien, who grew up in Islington, is expected to line up against Middlesbrough as the Championship season kicks off this weekend

The campaign hasn’t even started yet and already former Acland Burghley schoolboy ­Jermaine Anderson has won silverware with Peterborough United. The 22-year-old midfielder captained the Posh on Tuesday night when they beat Kettering Town 3-0 to win the Maunsell Cup.

Having overcome two long-term knee injuries already in his career, Jermaine, who grew up playing for Futebol de Salao (FDS), will be hoping he can play a part in Posh’s opening game against Bristol Rovers on Saturday.

Midfielder Anthony Wordsworth and striker Danny Hylton grew up a stone’s throw away from each other on Cumberland Market estate in Regent’s Park. They played on the same pitch – which local youngsters called “the cage” – and will be ­counting down the days until they face each other again.

On the opening weekend, however, Anthony will be focusing on beating Fleetwood Town after completing his move to AFC Wimbledon from Southend United, while Danny will be looking to add to the 50 goals he has scored in just 90 appearances for Luton Town when they take on Portsmouth.

Goalkeeper Lawrence Vigouroux, who grew up on Ampthill Square estate in Mornington Crescent, has returned to League Two side Swindon Town after a loan spell at League of Ireland side Waterford last season.

The 24-year-old former Liverpool shot-stopper, who went to the same ­primary school as Anthony, Christ Church School in Redhill Street, Regent’s Park, will be hoping that he’s done enough to get the nod between the sticks when Swindon take on Maccles­­field Town at the County Ground after impressing during pre-season.