She knew she didn't have forever, but asked: ‘If I don't raise funds for research, who will?' 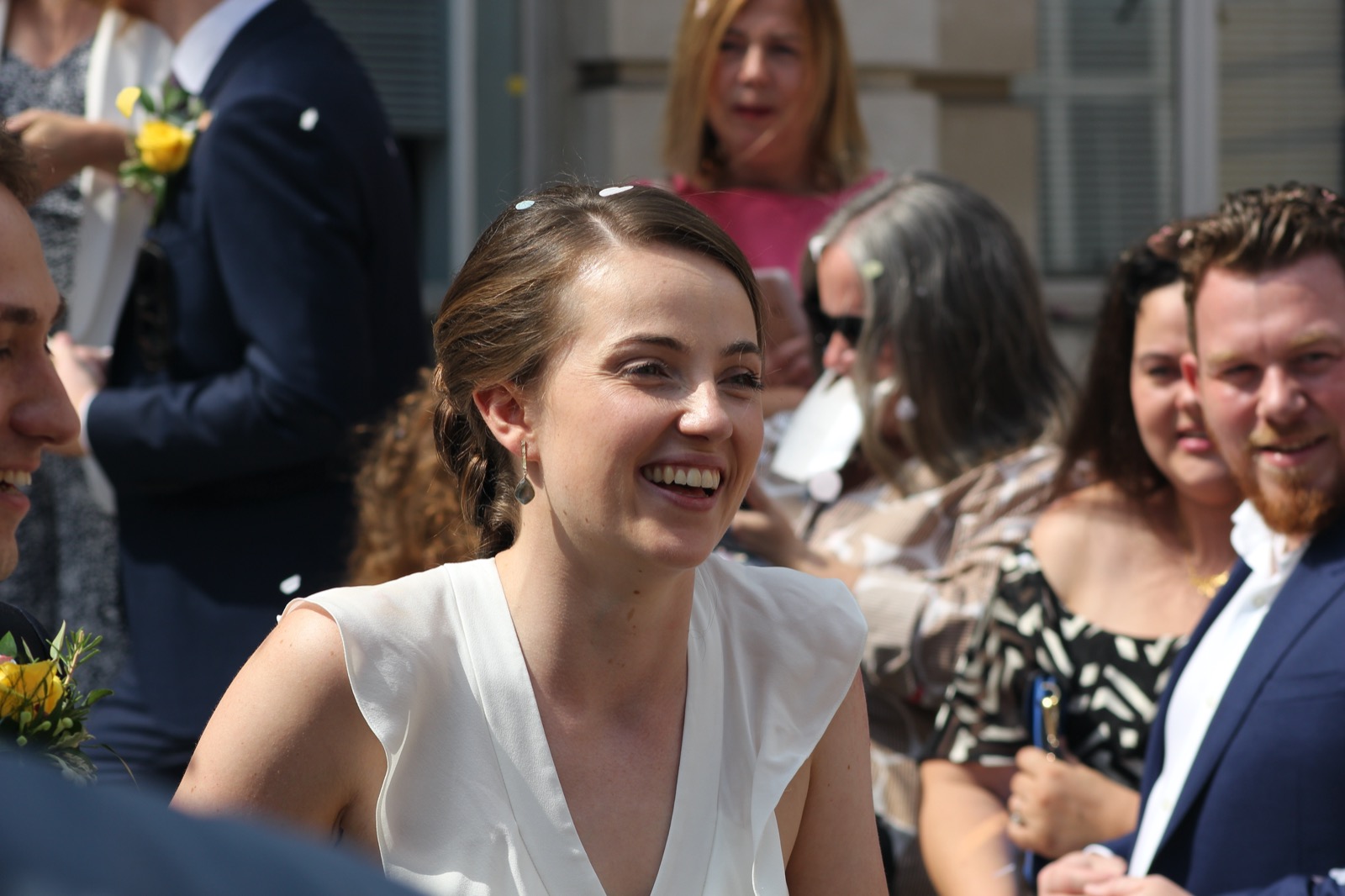 Liz Clarke-Saul on her wedding day two years ago

THE Somers Town Coffee House was bustling with people when Liz Clarke-Saul sat down to talk to me about how she was going to die.

People all around were gossiping about the trivial irritations that consume us each day, and yet here she was calmly recounting how she had been dealt an unimaginable hand.

Her story was chilling, but she wanted it to be told, not for pity but as part of an ambition to change the course of a ruthless disease.

As a teenager, her leg was amputated following a cancer diagnosis that will be filed in medical history books for its rarity: adamantinoma, a form of horrible bone cancer that only a handful of people in the whole world have.

The reason you probably haven’t heard of it is that you’d be more likely to win the lottery than develop it.

Liz, 31, my partner’s cousin, had not let it hold her back though. She went to university, wore her prosthetic limb with pride, met a catch of a future husband and realised she was so fast on a bike she could ride competitively, going on to represent Team GB as a paracyclist. 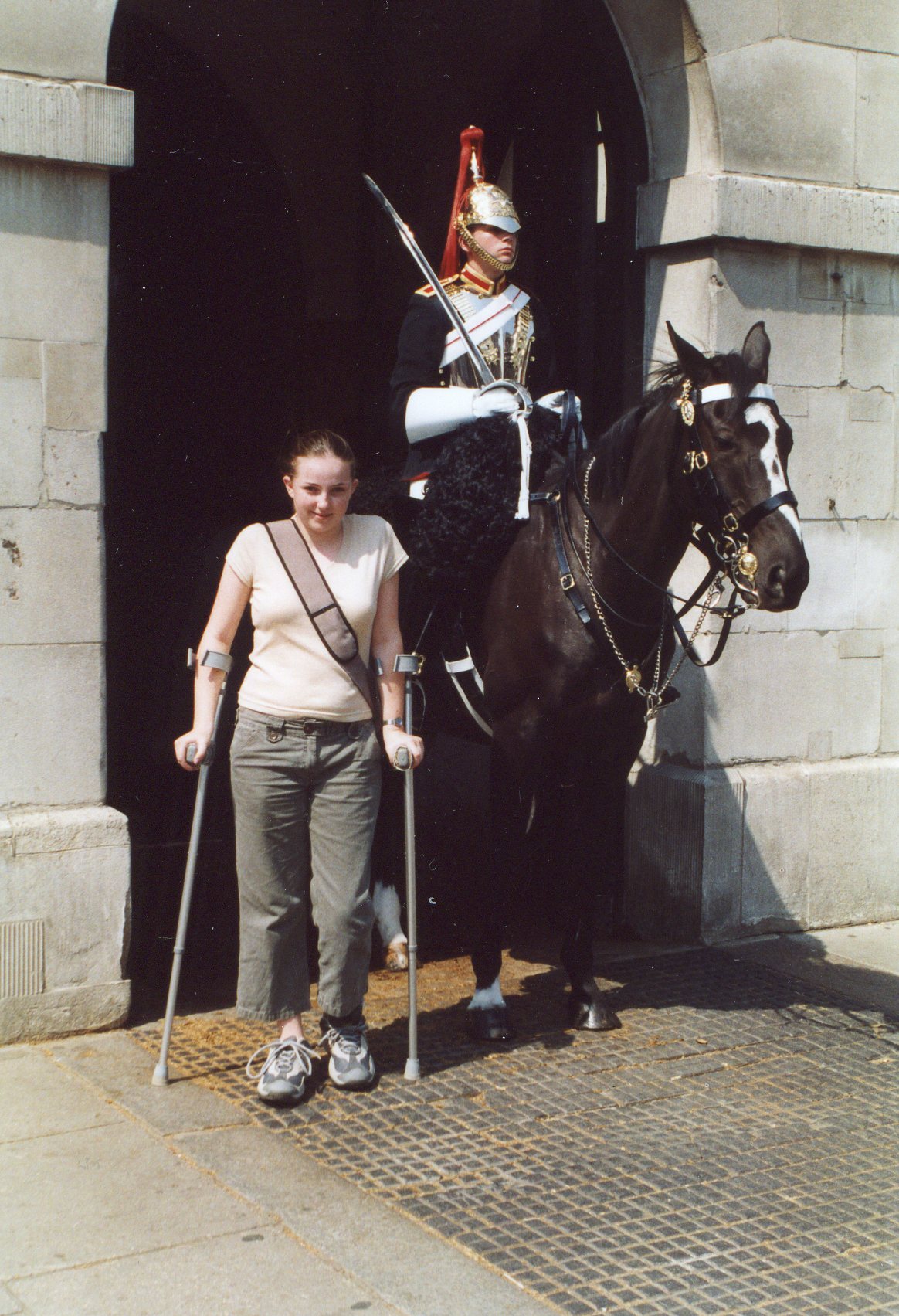 Liz as a teenager; she had her leg amputated after her first diagnosis

But by that evening in the pub last summer the adamantinoma had come back, appearing on scans of her ribs and later the spine. She knew what was likely to happen next.

Anybody listening to her talk about how she had set up a fund to pay for research would have surely felt the same: firstly, and obviously, that this was all so unfair.

But they’d also feel an all-out admiration for how this composed, soulful young woman wanted to use whatever time she had left to help those who may follow her down this path in the future.

Sadly during lockdown the call we feared came through: Liz had passed away on July 20. One day, everybody will get together to celebrate what she achieved beyond the square boxes of videocalls.

Because with the help of friends and family – and people who had read her story – she had raised nearly £50,000 for that sorely-needed research. 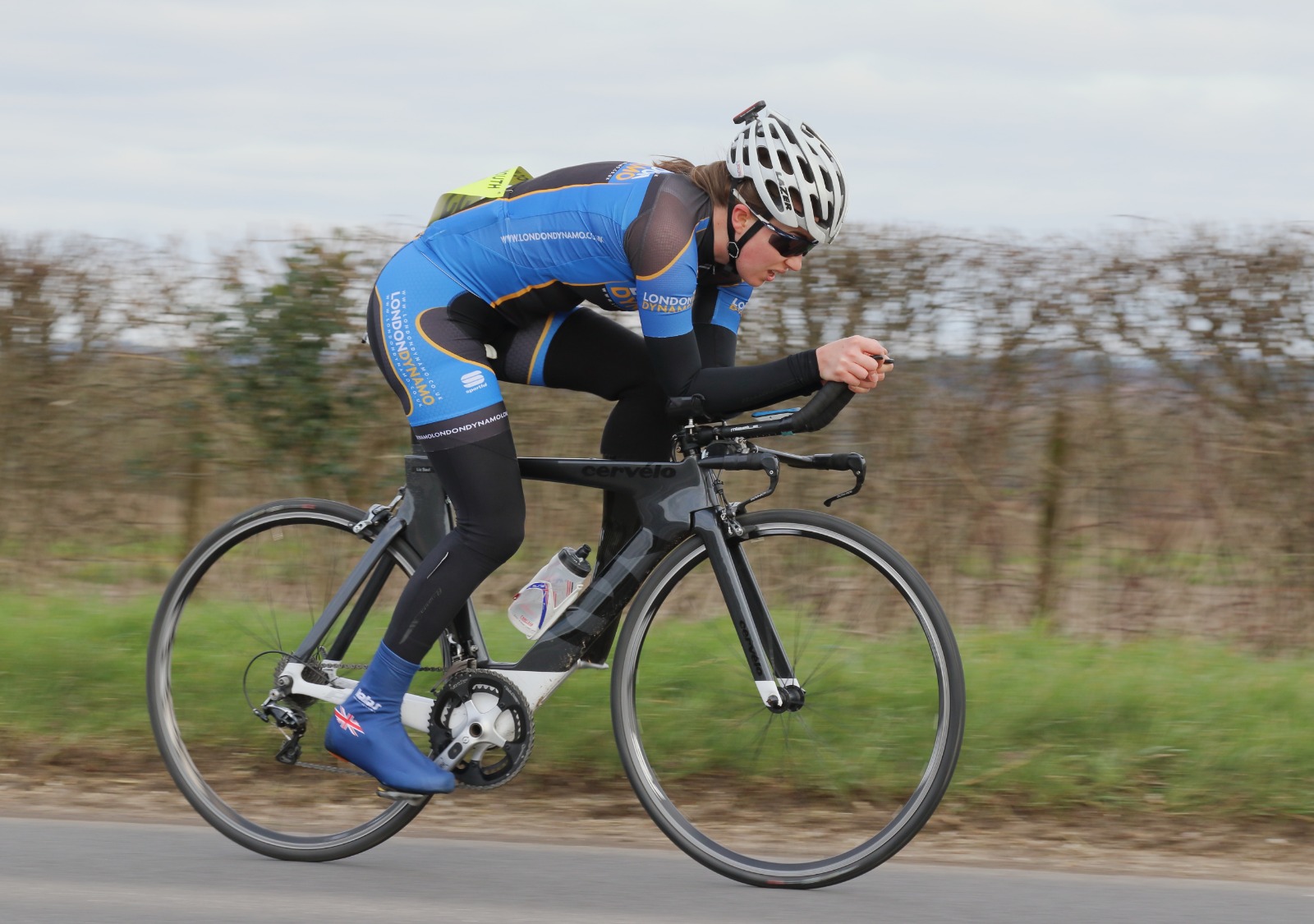 In March, just before the world got turned upside down by the coronavirus, she had written for this paper about reaching this milestone.

“I’ve had the opportunity to think about what I want to achieve in my lifetime and how I want to be remembered,” she wrote. “I don’t have a bucket list as such because what would I do if I reached the end of it? How would I feel if I died and I hadn’t completed it all?

“What I do know is that I want to change the landscape of adamantinoma for patients in the future so that another me, in however many years time, wouldn’t be sat down by their oncologist and told that there was nothing they could do.”

The Bone Cancer Research Trust announced that the money raised so far will pay for the UK’s first ever adamantinoma research programme.

Two groups of researchers have applied for the funding to look at why the disease behaves as it does. It’s a long, long way to go but it could be the first building block for one day finding a treatment.

Her husband Jack said: “She was worried that it is so rare that they wouldn’t be able to find anybody to come up with a research project for the funding, because it was just so niche. So to know that not one but two projects can begin is really exciting.”

Jeremy Saul, her father, said: “If there’s positive outputs from this work, it might make it easier to get proposals for subsequent work, because some of the bigger organisations are not that keen on starting from ground zero. But if somebody has already done the preliminary legwork, then they’ve got something to start from.”

Liz, who worked in communications and fundraising for UCL in King’s Cross, actually married Jack twice in 2018.

Once, when things suddenly looked very bleak from the scans and speeding up their engagement seemed necessary, and then again when she made it to the date they originally planned. We all danced to cheesy songs and ate nice food, and got to forget about it.

But Jack said this week: “We were about halfway through our second anniversary meal and she said ‘I can’t breathe very well – I just can’t breathe properly’. “We had some oxygen tanks delivered but that was the Sunday and then it was then eight days ­later that she died.” 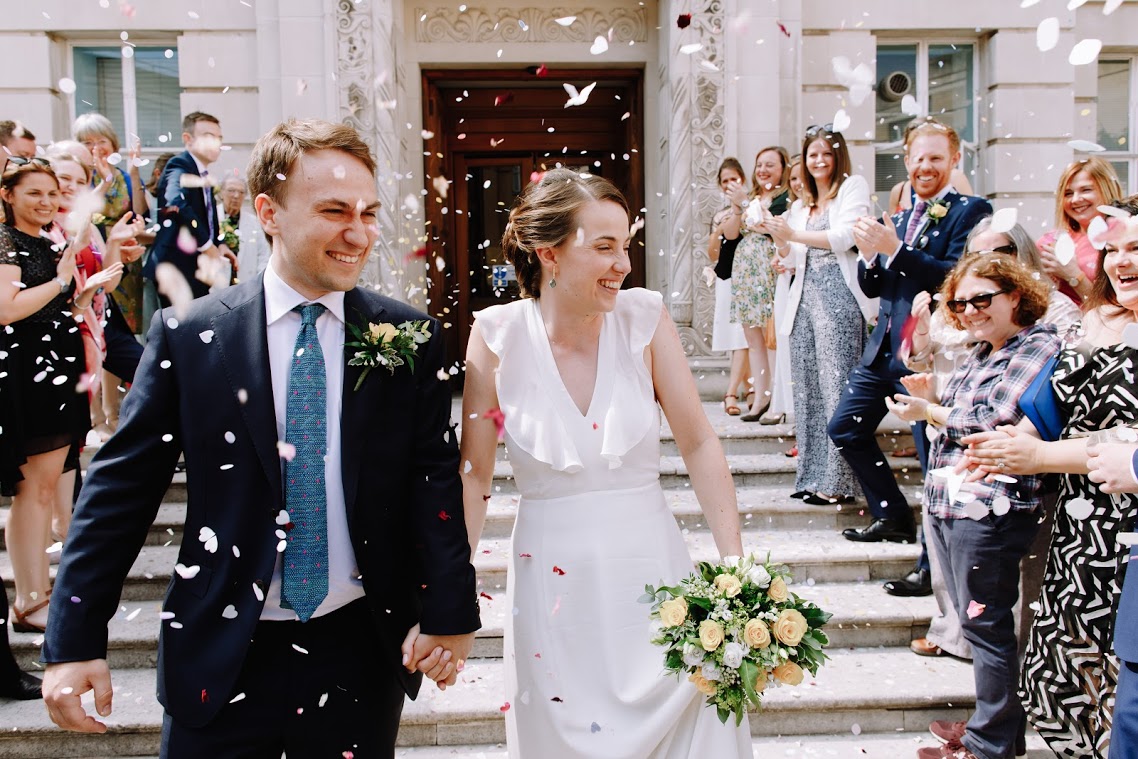 Jack and Liz on their wedding day

Her mother, Lesley, said: “She wanted to live really well and not be poorly for a long time and that’s what happened. It was obviously distressing, but it is what she wanted: to live, live, live and then not linger.”

Her relatives said she had been determined not to let Covid stop her first. She had been remarkably fit given everything she had explained about her diagnosis: it’s only a little over a year ago that she cycled from London to see us by the beach in Brighton.

The fact she was such a committed cyclist meant it probably took longer for anybody to realise that the fluid that had appeared on her lungs was the return of adamantinoma.

The only real option for anybody diagnosed with it is surgery. 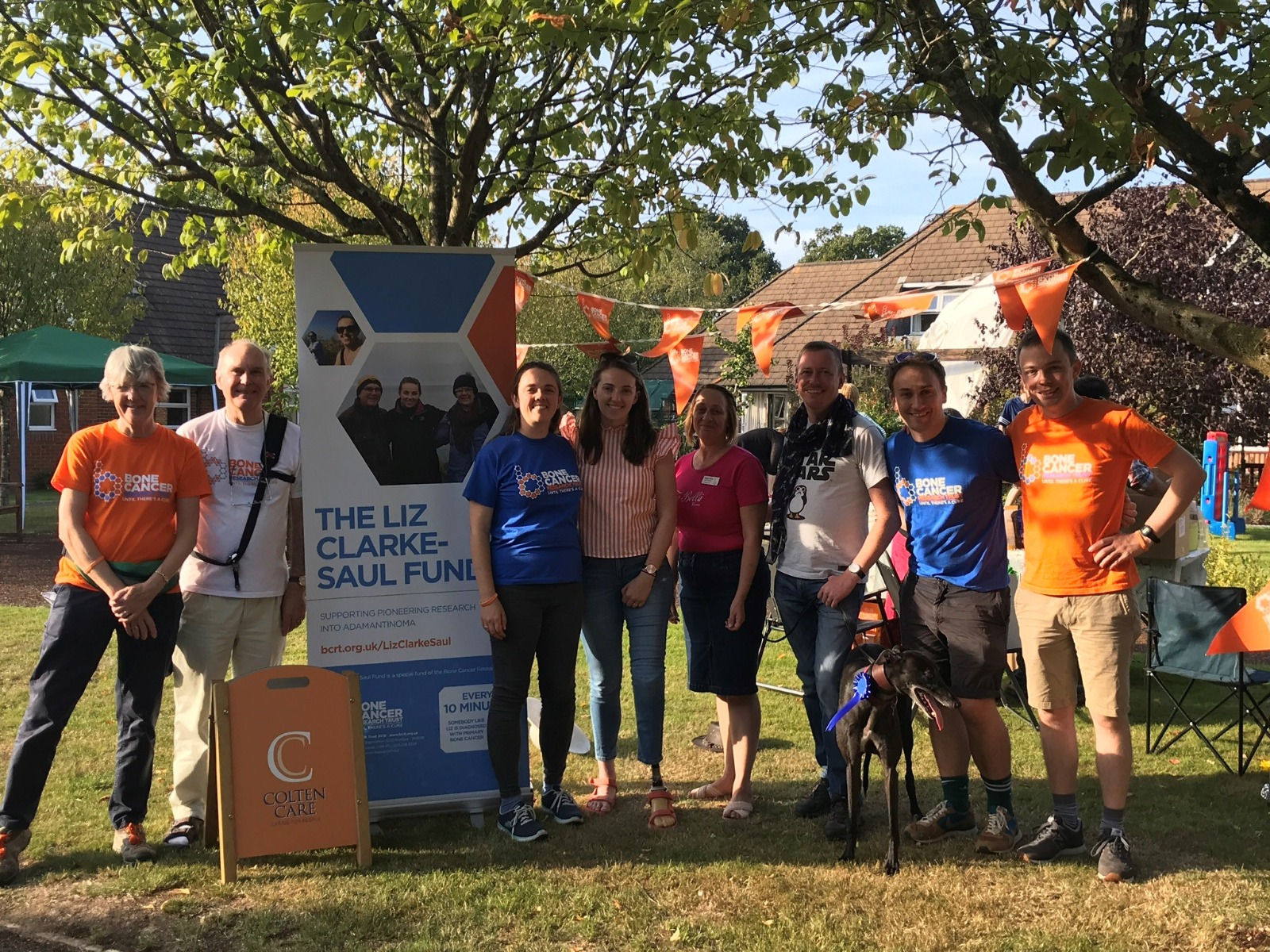 Liz Clarke-Saul, fourth from left, with close members of her family as they raised money for research into possible treatments for adamantinoma

One of the new research projects will investigate if a protein already identified in the spread of another primary bone cancer also controls the spread of adamantinoma. The second will further investigate potential new targets for future treatment options.

“When she started the fund, it wasn’t something she wrestled with, about whether she should be more private. She often said, ‘if I don’t talk about adamantinoma, if I don’t try and raise funds for research: who will?’” said Jack.

“It became something powerful for the family to do together, but also powerful for her. When you are talking to someone and say ‘I’ve got incurable cancer and it’s really bad’, it’s mitigated if you also say ‘but we’re doing something about it’. The little triumphs in fund-raising, the marathons, the quizzes, the dog shows, were all positives that helped.”

Zoe Davison, head of research at the Bone Cancer Research Trust, said: “Liz was such an inspiration to us all and on behalf of everyone at the BCRT and every patient who will face a diagnosis of adamantinoma in the future, we would like to thank Liz and her family for everything they have done. The adamantinoma research programme is Liz’s legacy and we will always remember her for her determination and strength in making this research happen.”