Living and dying by the sword in The Last Duel 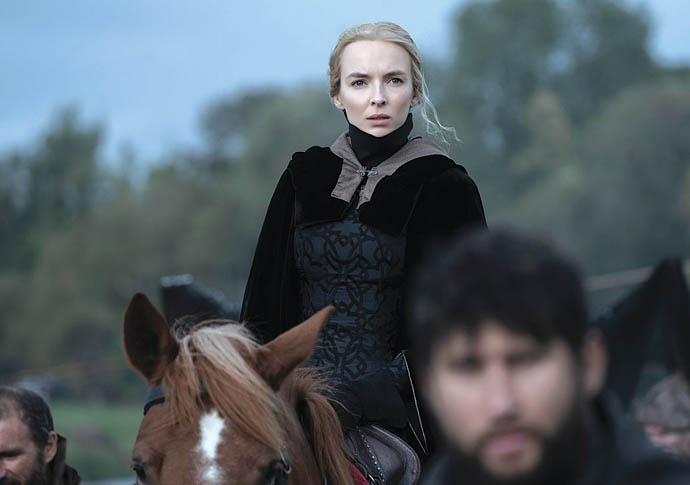 Jodie Comer in The Last Duel

SEXUAL assault was not a crime against a woman in 14th-century France, we are told, rather a crime of property against her husband.

And one way of seeking “justice” was to challenge the accused to a duel to the death. And if the accuser is killed, it was seen as God’s judgment – and the woman would be tortured and burnt to death.

Not a pleasant concept at the heart of Ridley Scott’s The Last Duel, a true story of Norman knight Sir Jean de Carrouges (Matt Damon), his wife Marguerite (Jodie Comer) and a squire, Le Gris (Adam Driver). Le Gris was accused of rape by Marguerite and justice demanded.

Scott has created a film in three parts, with the three lead characters given a chapter each.

We meet the comrades in arms as they ride into battle, and follow their friendship as it fades and antagonism festers for numerous reasons. They range from a dispute over land to a contentious appointment of Le Gris to the role of captain of a castle, a position Sir Jean feels is his by birth right.

Things get further heated when Sir Jean marries Marguerite, the daughter of a disgraced nobleman – and vile Le Gris takes a shine to her.

While you can imagine Scott using these different points of view – and by using three different writers for each section (they were penned by Matt Damon, Ben Affleck and Nicole Holofcener) – would be a way of exploring men’s inhumanity towards women and, perhaps, create an allegory about how our modern world still has so much to do.

But it makes for a troubling approach, not least because some scenes are simply so unpleasant you don’t want to watch them again from another perspective.

Scott creates a narrative, builds up a vision of 14th-century France that has a sense of modernity – were they so different from today?, we are asked.

Yet tackling such a topic feels wrong when hitched alongside a typical Scott swordplay epic – he draws from the Gladiator playbook in terms of battles and grunted arguments between the leads. This detracts from the sensitivity this story should demand.

The fact is we have a serious problem regarding male violence towards women and a system that repeatedly fails the people subjected to these crimes. Depressingly, this film may be set the best part of 700 years ago, but we still face the same basic issue now.