Lives in Transit: lost in a cruel immigration system

Heart-breaking drama, based on a true story, follows asylum seeker’s search for a safe haven 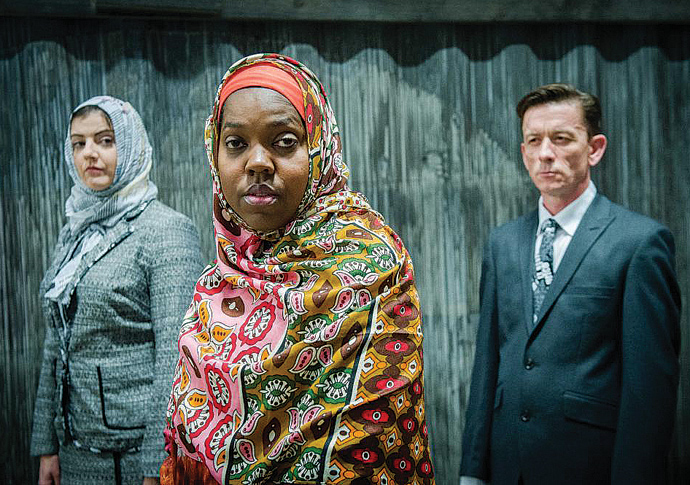 Raquel McKee (centre) as Asha in a stage production of the story. Photo: Carrie Davenport

BASED on a true story, Rosemary Jenkinson’s heart-breaking drama, Lives in Transit, depicts the cruel immigration system endured by traumatised asylum seekers desperate for a safe haven in the UK or Ireland.

Asha (Raquel McKee) lived in limbo for six years. Having suffered rape and violence in her native Somalia at the hands of Al-Shabaab, Asha paid a trafficker $2000 in the hope of finding safety. Instead, she is raped by the trafficker before arriving in Dublin.

Asha is shunted between hostels and detention centres while having her asylum application repeatedly turned down because of “gaps in her information”.

Lives in Transit highlights many of the factors that can determine life or death decisions for refugees: a biased interpreter (here played by Farshid Rokey); an inability to answer impossible questions – Asha could not recall how many mosques there were in her region; and arriving on false documents – because it was the only means to travel safely.

Asha is repeatedly returned to Dublin (ironically under “the Dublin agreement”) because she was first fingerprinted there.

In Belfast, she is helped by Thomas (Jonathan Harden) who finds her accommodation and a solicitor. In England, she is sent to Yarl’s Wood where she befriends fellow detainee, Yasmin (Nimmy March), before being deported back to Dublin to begin the process again.

Jenkinson reveals the full horror of the UK detention centres where detainees hang themselves in despair or overdose on sleeping pills.

Asha is in a race against time, hoping to be reunited with Halima, the daughter she left behind, before she is eighteen and no longer deemed a minor. Gradually she is worn down by the circular process, the endless rejections and casual racism.

Will Asha ever find the security she yearns for or will she be returned to Somalia and almost certain death?