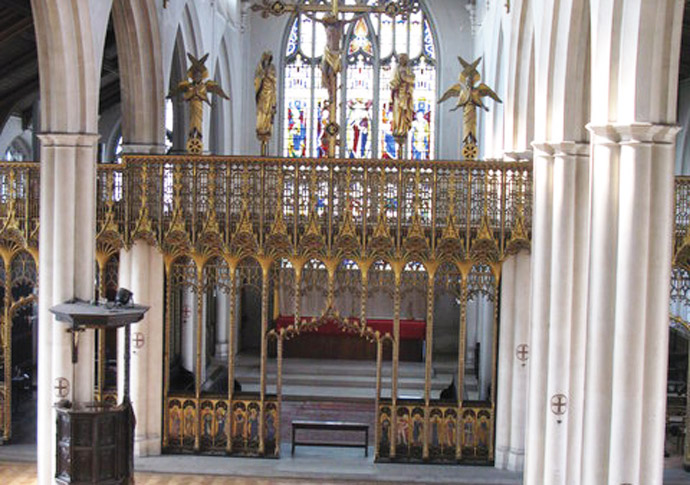 LIKE so many heartbroken lovers, we said our farewells on the glorious forecourt of St Marylebone station last week, but unlike the star-crossed variety, we are back again just seven days later to continue our lockdown-inspired virtual stroll around this borough of ours.

From St Marylebone, our first leg takes us gently eastwards to stop briefly at St Cyprian’s, the turn-of-the-20th-century church in Glentworth Street.

St Cyprian – which happens to also be the name of the awful prep school a young George Orwell attended – was an early Christian scholar and bishop in the city of Carthage, where Hannibal sprang from. He protected Christians against persecution by Romans in what is now Tunisia.

The church that bears his name was built by a man with a moniker that tickles Diary (regular readers will know we go in for titles), Sir Ninian Comper.

Known as the last of the great Gothic Revivalists, as well as creating this marvellous little church, he designed stained-glass windows for Westminster Abbey (his ashes are scattered beneath them).

Comper, who would live till the ripe old age of 96, saw his studio hit by a bomb in the Second World War. He clambered among the debris, rescuing draughts and pictures, stamping out smouldering bundles of papers, and relocated to a small shed in his garden, previously used by his son, Nicholas, to design aircraft.

From Comper’s delicate back-street masterpiece we head along the grander edges of Regent’s Park until we reach that hallowed institution, the Royal Academy of Music, which is the oldest conservatoire in the world and now found set back off Marylebone Road.

Founded in 1822, and originally based in Hanover Square, Mayfair, it moved to its current premises in 1911.

George IV gave the academy a royal charter in 1830, and its alumni range from Henry Wood, Harrison Birtwistle and Simon Rattle to John Dankworth, Annie Lennox and Elton John.

With such a long and celebrated history it’s hardly surprising its library houses more than 160,000 items, ranging from early music manuscripts to medieval instruments. Luckily some of these 160,000-odd items are not tucked away out of sight, they are on display inside the academy’s museum.

While we’re here, let’s pop inside and gaze at the damaged horn once owned by the great Dennis Brain.

Brain, who descended from a great line of horn players, had been told by his family not to go near the instrument until he was into his late teens, as the mouth and diaphragm were still maturing. Instead he learnt the piano and other musical must-knows to prepare himself. 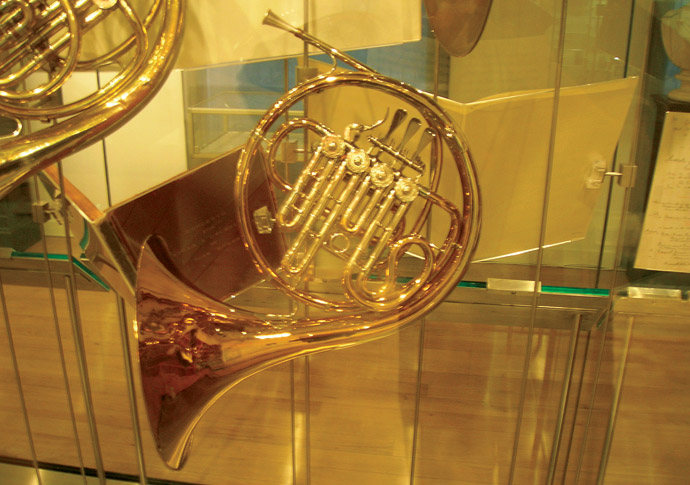 By the age of 21 he was the first horn in the National Symphony Orchestra, but was then conscripted as war broke out.

Like the Boogie Woogie Bugle Boy From Company B, he was drafted but allowed to find time to play – he joined the Central Band of the Royal Air Force and travelled to British bases around the world with the orchestra to remind troops of what they were fighting for. He was lauded by composers – Benjamin Britten wrote Serenade for Tenor, Horn and Strings in 1943 for Brain’s return from service.

Brain was known for being wonderfully careless, his horn was bashed and battered as he swung it about during gigs, dumped it roughly on train luggage racks, RAF transport planes, the backs of army lorries, and generally lived the lifestyle of a gigging musician with his horn in tow. Britten would even give him two copies of each score, aware one may be left on a bus or in the loo.

Known as “The Genius Who Tamed The Horn”, Brain sounds a lot of fun. He became friends with the legendary artist and musician Gerard Hoffnung – and the pair got up to musical mischief together, with Hoffnung meeting Brain for strolls around Regent’s Park, ending up with a concert at the academy.

Hoffnung had been sent to London by his German Jewish parents in the 1930s, and after attending Highgate School, and the Hornsey and Harrow colleges of art, became a much sought-after illustrator and cartoonist.

Hoffnung’s other love was classical music, and much of his humorous penmanship was based on inventing new instruments out of household bits and bobs.

In 1956 Brain chose to perform at one of Hoffnung’s alternative music festivals that celebrated his hilarious designs for musical instruments.

Brain took a piece of hosepipe, trimmed it with garden shears to tune it, and performed a rendition of a Leopold Mozart horn concerto.

The horn on display at the academy, however, has an air of tragedy behind it. Brain was not only a skilled musician, but a man with the need for speed. He was a car enthusiast, and would place a copy of Auto Trader on his music stand to skim through during rehearsals when the horn parts weren’t scored for action. On a wet night in September 1957, Brain was heading home in his Triumph sports car after playing in Edinburgh.

As he sped down the A1, he lost control and spun off the road, into a tree. He died from his injuries, aged just 36.

The academy is situated on the corner of Macfarren Place – named after the Victorian composer who joined the academy aged just 16 and would eventually teach there.

George Macfarren had a lifelong problem with his eyesight and would eventually become blind – but it did not stop his productivity as a composer. He employed friends to help him with his scores and get down the music into his head on to paper. Macfarren lived – and died – in Hamilton Terrace, St John’s Wood. It is said he would walk to work each morning via as many of Westminster’s squares as possible, and pause to listen to birdsong.

Sir George would memorise what he heard during the dawn chorus and then over a morning coffee at the academy he would challenge himself to write down the notes from different bird species, before asking a handily placed student, no doubt heading past his office door on their way to a lecture, to play the notes on whatever instrument they had tucked under their arm.

And on that brighter, sweeter sounding note, until next week, Stay well, stay safe.