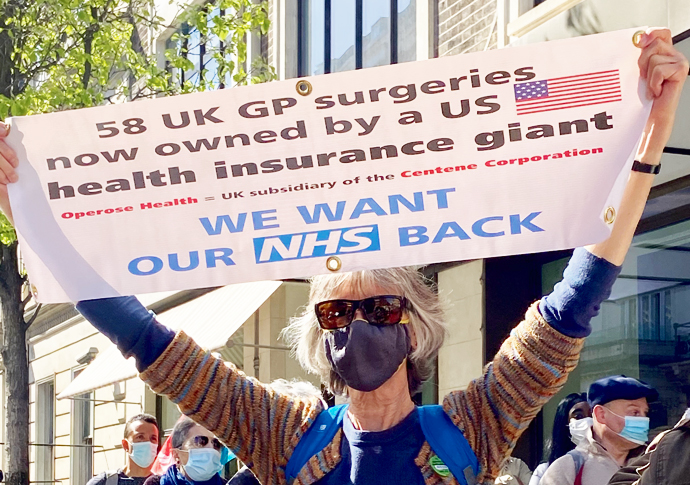 A protest outside Operose Health’s offices earlier this year

CAMPAIGNERS fighting to overturn a US takeover of GP surgeries claimed an “incredible victory” this week after north London NHS chiefs said they would re-tender contracts earlier than planned.

The We Own It group says its persistent letter-writing campaign has forced North Central London Clinical Commissioning Groups into a rethink.

It has announced it will seek fresh bids for two Islington GP practices next year, instead of in 2025 as had been previously agreed.

The group said in a bulletin to supporters that “after months of pressure North Central London health leaders have decided to get Centene out … this is incredible news”.

In February, the New Journal broke the story about a change in control of dozens of surgeries across London and the South-east, including four in Camden and two in Islington. Private provider AT Medics merged with Operose Health to form a new company that is wholly owned by the Centene Corporation.

It meant one of the biggest health insurance firms in America was in control of NHS contracts in Camden – for GP services at King’s Cross Surgery, Somers Town Medical Centre, Brunswick Medical Centre, the Camden Health Improvement Practice for homeless patients and Camden’s out of hours service.

We Own It campaign chief John Nwogbo said the group would now focus its attention on ousting Centene from Camden surgeries, following the “success” in Islington.

He said: “It is our demands – to get Centene out – which we believe forced them to make this decision in Islington. So far we have organised hundreds of people to email the North Central London CCG on this issue. We know this does have an effect.

Concerns had been growing among Camden campaigners about whether locally focused action can make any difference, faced with such a big overseas corporation and the NHS bureaucratic management system.

In March, the chief executive of Operose Health, Samantha Jones, quit to become the top health adviser to Prime Minister Boris Johnson. Since the New Journal broke the story about the takeover, questions have been put to the health secretary in the House of Commons by the shadow health minister.

There have been several public meetings and Islington campaigners later launched a judicial review against the decision arguing it was made without the public being notified. More than £40,000 has been raised to help the legal challenge.

An NCL spokeswoman said the contracts decision had been announced at a board meeting last Thursday.

She added: “At their meeting in June 2021, the NCL CCG Primary Care Commissioning Committee in Common discussed four practices with Alternative Personal Medical Services (APMS) contracts due to expire at the end of July 2021.

“This included two practices in Enfield and two AT Medics practices in Islington: Mitchison Road Surgery and Hanley Primary Care Centre. Following a thorough strategic review of each contract, the committee decided to extend the contracts of all four practices for a one-year period.”