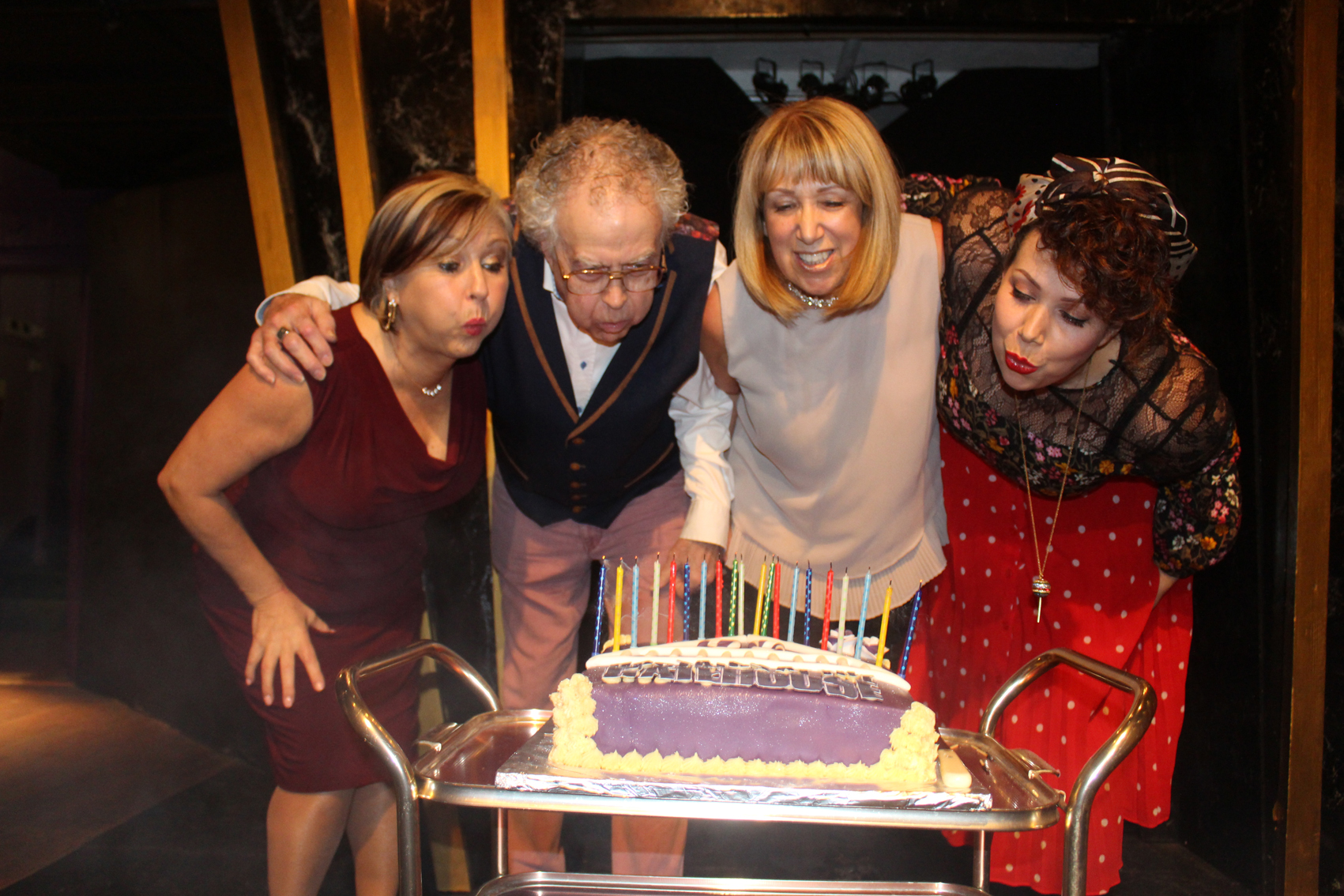 Lesley Garrett helps blow out the candles with John, Katie and Jessica Plews

SOPRANO Lesley Garrett helped cut the cake at the 20th birthday party of a Highgate village theatre on Sunday afternoon.

She was special guest as Upstairs At The Gatehouse hit the milestone anniversary, two decades after owners John and Katie Plews converted a forgotten pub storeroom. “This is an iconic, unique space,” Ms Garrett said. “It’s been many things. It’s been a music hall, a masonic lodge, a whole range of things but I’m absolutely positive that over the last 120 years no one has lavished more care and attention, no one has done more to realise the potential of this extra­ordinary building than Katie and John Plews.”

She was speaking after a matinee performance of Top Hat, the in-house production which has won a string of five-star reviews and brought national newspaper critics to the theatre.

In an interview with the New Journal, the couple recalled how at first locals needed a little bit of convincing to come along when they opened in 1998. “It was a pub theatre and, of course, you could smoke in those days, not that we did in here, but people thought: ‘Smoky pub theatre? Oh no darling, we’ll go down to the West End.’ It did take a while, but I think we’ve converted most people,” said Katie. John added: “If you looked at the statistics, our average house for the first year was 44 people, our average house for Top Hat is 127, so that shows I suppose how far we’ve come in 20 years.”

While the pub and its upstairs room had a varied history, bar chain Wetherspoon was using it as little more than a storeroom when the couple saw the potential and moved in. The first play, Not A Game For Boys, opened on January 13, 1998, and did attract a large, intrigued crowd.

“It was full because there were a lot of curious people,” said John. “They wanted to know what was going on, thinking: ‘John and Katie have opened a theatre. Goodness, what’s that going to be like?’ To be honest, it wasn’t very comfortable. The seats you see now, nicely padded, in those days were brown plastic seats.” Since then, the couple have put on a plethora of their own shows, becoming known for big productions of musicals around Christmas.

Strictly Come Dancing winner Joanne Clifton is among this year’s cast of Top Hat, which has now sold out its entire run. “We had a lot of support from friends. We asked people for money and we raised a lot of money from a few people because they all thought it was a great idea,” said Katie, recalling the theatre’s early days.

Its patrons include some of the area’s famous faces, with Ms Garrett following a long line of celebrities on cake-cutting duties. “I remember years ago when we needed a new photocopier and we put a little appeal out to all our regulars and the wonderful, wonderful and sadly missed Victoria Wood rang us up and said: ‘We’ve got a photo­copier we are not using’,” recalled John. “So things like that have happened over the years. We’ve had lots of support in the local area.” 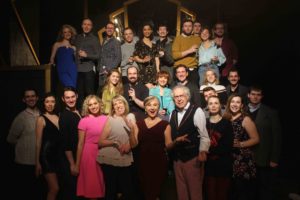 Ms Garrett with the cast of Top Hat

The couple had previous experience of running a production company but had a joint dream to open their own theatre. Katie added: “We’ve tried to support new directors, new designers, stage managers, helping them to get on the ladder. You get a kick going into the West End and seeing people who have made it big time in the West End when they had their first job here.”

Their daughters have followed them into the entertainment business: Racky, a director and choreographer, had a hit with American Idiot, a musical featuring the songs of Green Day, and Jessica is a respected wigs and make-up artist in theatreland.

Being married and working together all day had not been a problem for the couple, they said, because they got on. Their occasional conflicting views on shows were healthy. 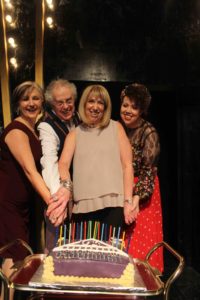 “I’m not going to tell you what year it was because it was a long time ago, but yes we met on board the QE2,” said Katie, before John finished the story: “I was part of the entertainment team and Katie worked in the casino. I was a bit of a casino person. I like gambling, but I wasn’t allowed to gamble because I was a ship’s member. I used to go in and watch though, so I could pick up a few tips for when I got to Vegas or something, and I spotted Katie dealing cards and that was it. The QE2 has a very dear place in our hearts.”

And the future? “I don’t know, but at the moment we are still enjoying what we are doing. Ask us again in three years.”