Leigh makes a panto of Peterloo

Film about Mancunian massacre of 1819 creates a world where the monied classes are ridiculous characters from the Blackadder Regent years song book, while the downtrodden masses are unable to keep their faces clean 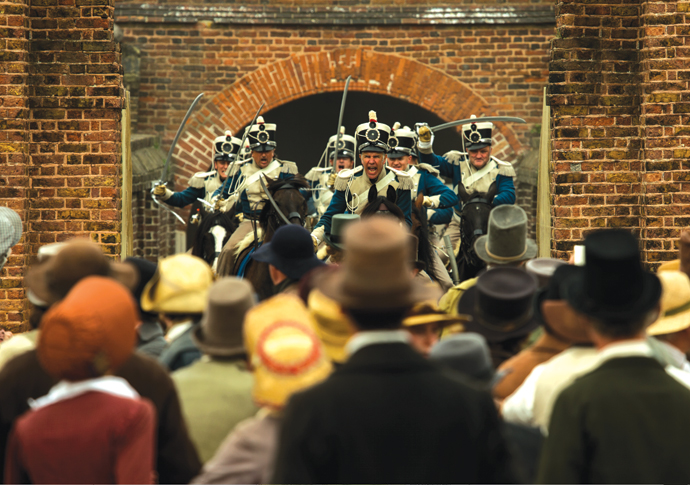 IT is worth remembering, as you sit through the tub-thumping toing and froing, that this Mike Leigh film has a big heart and it is most certainly in the right place.

But you may have to continually remind yourself this as, while it is beautifully shot and about a moment in British history that must not only never be forgotten and deserves to be given much greater prominence, there is also something very panto about it all.

In 1819 cavalry, acting on the orders of magistrates, acting on the orders of the Home Secretary, essentially acting on the orders of George III, swept into a peaceful meeting of around 100,000 people in Manchester and hacked them down with their sabres. Hundreds were injured and up to 18 people died. It was a massacre, a deeply shameful moment in our history, and Peterloo should rightly be remembered, it should also be taught in schools, and if Leigh’s work brings it to a wider audience, then what’s not to like?

The economy was in a bad way. Thousands of soldiers returning from the Napoleonic wars were out of work. Poor harvests added to the hardship, as did the increased industrialisation of trades like cotton. The Corn Laws stopped cheaper imports coming in to help alleviate the rising prices for bread. There was no franchise – some of the larger northern cities areas simply had no MP. The king and Parliament were only interested in feathering their own nests, and were living in paranoid fear that they may suffer the same fate as the Bourbon dynasty in France.

In Leigh’s telling of the story we meet cornet-playing soldier Joe (David Moorst) on the field at Waterloo, and then as he stumbles, shell-shocked, home to Manchester to fall into the arms of his mum (Maxine Peake).

This could be a grand opening, but Joe’s stumbling gait is a sad sign of some of the hamminess that is to come. Leigh has created a world where the monied classes are ridiculous characters from the Blackadder Regent years song book, while the downtrodden masses are unable to keep their faces clean: there is little room for any nuance.

A host of Mancunians, from weavers to well-meaning reporters at the Manchester Guardian, step on to the soap box to tell us what scum and villainy the upper aristocracy and capitalists are (hear, hear) while the evil magistrates say what scum and villainy the workers are. It’s stage-style direction rather than film. It detracts from Leigh’s well-intentioned attempt to bring this awful day to life.

I wanted to be made to cry. I wanted to come out feeling passionate having heard a great oratory, bringing alive the ideals of the generation after Tom Paine, the French Revolution, and Mary Wollstonecraft’s A Vindication Of The Rights Of Women. I wanted to come out with burning indignation. I wanted to feel inspired by the battles our ancestors fought against the capitalist/monarchist axis, and enjoy a rant about how utterly stupid it is that we are ruled by the same class who would be comfortable dining fellows with the schmucks in charge back then.

But instead I felt strangely unmoved.