ARTIST Keith Vaughan wanted to study the male form. Like Michaelangelo breaking into Florentine mortuaries in the dead of night, he knew he had to get to know the human body to be able to paint it correctly.

But he was also a gay man living at a time when his sexuality potentially made him an outlaw – and his art, which included taking photographs of naked men, could bring the authorities to his door.

Now a new exhibition features previously un­seen photographs that he took in the pre-war period – and show a direct link to later paintings, while revealing more about an artist whose work is being rediscovered. 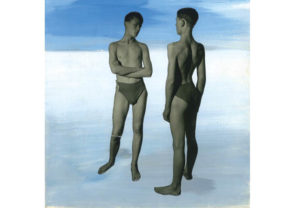 Vaughan, who grew up and lived in Lyncroft Gardens, Hampstead, was born in 1912. He would become a pillar of 20th century British art. As well as producing an extensive body of art, he served on the Arts Council, was awarded a CBE, had an honorary fellowship at the Royal College of Art, exhibited widely and was commissioned to create some of the most eye-catching murals used in the Festival of Britain.

But since his death in 1977, Vaughan has slipped from the public eye – and now a Bloomsbury gallery is displaying a large collection of photographs he took as a young man that cover both a crucial part of his development as an artist – and shed light on his personal life. 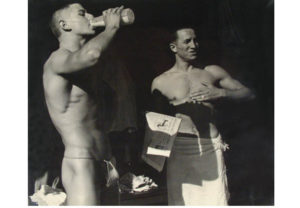 At the Men’s Pond in the 1930s. Photo: University of Aberystwyth

Exhibition curator David Archer at the Austin/Desmond Gallery has long championed Vaughan’s work. This latest show draws on pictures given to the great nephew of Vaughan’s friend, Tracy Stamp (formerly Bernard), after her death. They show a series of photographs he took at Pagham Beach, Bognor Regis in Sussex, where he would spend time staying in a railway carriage converted into a holiday home.

“Keith had a classical education as a young man with an emphasis on art and languages,” says David. “He had a love of art, literature, music and poetry.”

But he did not go to art college or university, and instead, aged 18, joined an advertising team Lintas, working for Unilever in 1930.

“He received training there as part of their art department,” says David.

“His contemporaries, the artists John Passmore and Felix Kelly, encouraged him to buy a camera. He bought a Leica – and it was with the camera he took the pictures on display, that would also later form a basis for his paintings.”

The pictures were part of a collection he worked on throughout the 1930s that formed a set of albums – and other photographs not in show, reveal he walked across Hampstead Heath to the Men’s Pond and shot men swimming, sunbathing, and showing off their physiques. As a gay man, his subject matter ran the risk of drawing attention to his sexuality. Because of bigoted laws, he lived in fear of discovery and arrest, and his subject matter would not have been the type of pictures you could simply walk into a branch of Boots and have printed without causing eyebrows to be raised, adds David. It meant he built his own darkroom at his mother’s house, and was wary of how he presented the photographs.

“He needed to present this work in a way that if he was challenged over it he could say it was something he did for a living, and they were not homoerotic or to do with his personal sexuality,” says David.

“Vaughan was forced to live between two worlds – an exterior world of rigid adherence to social conventions and accepted norms, a heterosexual world, and then a world that was true to his sexuality. He could say: these are studies for my art, this is the way I am studying the human form.”

“He felt the job restricted him and he wanted to become a fine artist,” adds David.

He lost his brother Dick in 1940 – he was killed while serving in the RAF – and spent the war years working as a translator. He was a conscientious objector and instead of joining the armed services became a translator due to his extensive knowledge of European languages. After the war, he resumed his life as an artist – works included two scenes on the Heath, painted in 1955 – and would become a tutor at the Slade School of Art.

“The discovery of these pictures taken in the first 12 or so years of his career is immensely important,” adds David.

“We have found later drawings, paintings and gouaches based on them. He had created his own, personal art school, with different elements that helped him evolve a figurative language and made him part of a neo-Romantic movement for a time.”

Self-taught as a photographer and an artist, this collection provides an insight in to a crucial period of a true great in the canon of 20th century British art.