‘Last hurrah’ party is broken up by police 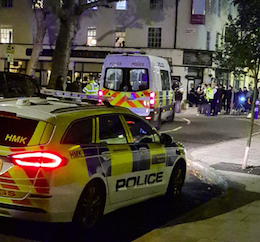 POLICE cracked down on a street party in Somers Town on the last night before new coronavirus restrictions hit London.

Three arrests were made after more than 150 people were found gathered in Chalton Street after a fight broke out on Friday night.

Members of the Territorial Support Group, the unit which specialises in public order policing, were called as back-up.

At one point, a stream of young people were reportedly going in and out of the Cock Tavern but the pub’s manager said he had been trying to usher people out of the bar.

Robert Taylor said: “It was a bunch of youngsters who had gathered outside and were drinking booze they’d bought, I think, from an off-licence. Some were trying to come in and use the toilets and get served but we were escorting them out and explaining that we could only seat six people to each table.” 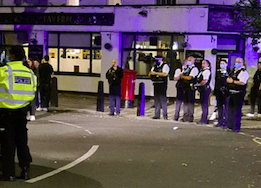 He added: “To be honest it happened so quickly that it seemed like within minutes there were 50 young people outside and then more came, so I wasn’t surprised when the police arrived. One officer told us that it had been arranged on Snapchat [messaging service] as a last hurrah kind of thing as the next day we were going into Tier 2.”

Tier 2 coronavirus restrictions mean people can no longer meet those from other households in pubs, while a 10pm curfew remains.

Mr Taylor said staff had removed outdoor tables to try and discourage people from sitting down and had talked to licensing officers from the council.

Somers Town police sergeant Ismail Gocoglu said: “Obviously on officers’ minds when they arrived was Covid-19, as well as the offences reported. All who were arrested were between the ages of 16 to 18. One male was arrested for the attempted assault of an emergency worker – thankfully the officer was not injured.”

Police last week urged residents to “be sensible” in relation to Covid rules and advised caution over any plans to go trick-or-treating on Halloween later this month.

Chief Inspector Peter Dearden said: “We’re alive to the fact that people can’t go to pubs or nightclubs after 10pm now, and that as the weather gets darker, colder and wetter, and we enter the festive season, some people are having parties at home or in private residences which is harder to police. We’ve already seen a rise in this type of gathering and we’ll respond to each report appropriately.”