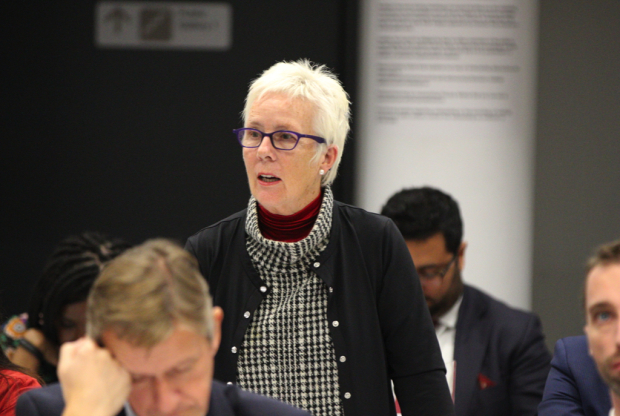 Councillor Alison Kelly raised 200 queries for residents in a year

LABOUR needs to find more candidates to fill its council elections slate after a two-term councillor announced she was stepping down.

Councillor Alison Kelly said today (Monday) that after eight years representing the Haverstock ward it was “now to find alternative ways of being an active citizen”.

In an email to colleagues, she listed what she felt had been the council and her own achievements.

“In the last year alone, I have raised 200 enquiries on behalf of Haverstock residents; including achieving permanent homes for families, stopping fraudulent just of council properties, ensuring damp, lifts and roofs are fixed, noisy neighbours supported, and discussing changes to Queen’s Crescent,” she said.

“I’m delighted we have had many successes. But some are yet to be resolved.”

Cllr Kelly added that she was “particularly proud” that residents were supportive of the redevelopment of the West Kentish Town estate; a source of friction within the Labour group, as some councillors are sceptical about the use of demolition.

“Camden is an extraordinary place. So much talent. Such a force for good,” she said.

Her departure is not part of an unprecedented wave of deselections which has seen six Labour councillors told that they will be blocked from standing again at the boroughwide elections in May – when all Camden residents eligible to vote decide have their say over who they want to run the council.

Even before this internal strife, a large number of councillors had announced they would not seek reelection including cabinet member Abdul Hai, former mayor Abdul Quadir, the West Hampstead councillor Peter Taheri and Oliver Lewis in Highgate.

Camden’s education chief Councillor Angela Mason’s name was notably missing from a list of candidates wanting to be on the ballot paper that was circulated internally last week.

Others to go voluntarily include members of the ‘left’ caucus within the Labour group who, given the fate of some of their colleagues, may have found it difficult to get through the candidate selection process. They include Douglas Beattie, Nayra Bello O’Shanahan, Gail McAnena Wood, Georgie Robertson and Simon Pearson.

The local party had already lost Lazzaro Pietragnoli – the council group’s former chief whip – in the middle of the process after his resignation over a fake social media account which he admitted had been ‘abusive’ and ‘negative’.

In the autumn, meanwhile, the deputy mayor, Lorna Russell, defected from Labour to the Greens.

Cllr Kelly was on a list of approved candidates circulated internally last week.  With her decision to not re-stand, this list is now at 51 candidates. There are 55 seats at play in the boroughwide elections.

Decisions on who will stand in which wards begin at branch meetings this week and will stretch into January.