Kim serving up tips for stars of tomorrow 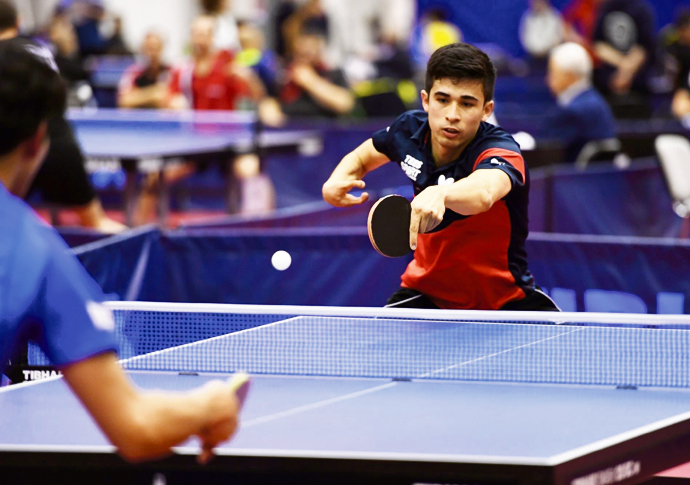 Kim Daybell is planning to compete at the Paralympic Games later this year. PHOTO: ITTF

TABLE tennis star Kim Daybell says it’s his “duty as an athlete” to share the experiences he has gained competing in the upper echelons of elite sport.

That’s why the Paralympian will be finding time between his exhausting shifts as an A&E doctor at the Whittington Hospital in Archway with mentoring the next generation of emerging talent in the world of sport.

Daybell has joined up with the True Athlete Project (TAP), a non-profit organisation formed of world-class athletes, coaches, psychologists, mindfulness teachers and policy makers. It matches aspiring young athletes with experienced internationals for a year-long learning programme supported by a holistic curriculum based on five key themes: performance, identity and values, mindfulness, community responsibility and nature and connectedness.

“TAP are very into mindfulness and wellbeing, and that kind of wholesome, holistic approach to the athlete, and I’ve been interested in that side for a while,” Daybell explained.

“I’ve been an athlete for a long time now – through three Paralympic cycles – and have that experience of balancing education and being a teenager and trying to make it work with everything else in general life.

“It is part of your duty as an athlete to pass on that knowledge and experience to the next generation coming through and give them those tools to try and help them.”

Sheffield-born Daybell put his preparations for the Tokyo Paralympic Games on hold to help in the fight against Covid-19. But he’s now back in training, with the Games expected to still go ahead in August despite all of the uncertainty surrounding the pandemic.

Daybell, who was born with Poland’s syndrome, a rare condition characterised by underdevelopment or absence of the chest muscle on one side of the body, represented Team GB at London 2012 and Rio 2016. He also won a silver medal for England at the 2018 Commonwealth Games.

The 28-year-old is now ready to share all of that experience he has gained over the years.

He will be mentoring 16-year-old fencer Adekunle Taiwo, and says he is looking forward to working with an athlete from a different sport.

Daybell added: “It’s really interesting because you can get very wrapped up in your own sport and how you do things, and it is interesting to see how other sports operate.

“I will definitely learn from Adekunle as well.

“It is a good reminder of how naive and young you were when you first started and how far you’ve come. I think it is nice to check in with that again and just remember and appreciate what you’ve been through and apply that to your own sport and your own life.

“TAP try to develop the mentor as well and teach you those skills to be able to impart knowledge, because that is not an easy thing to do, especially when you have spent your whole career being really focused on yourself.”