Bands waive fees to play in memory of 22-year-old

The 22-year-old World’s End barmaid was found dead in Finsbury Park on Boxing Day in a tragedy that has brought out a strong show of unity from Camden Town’s underground hardcore punk scene. 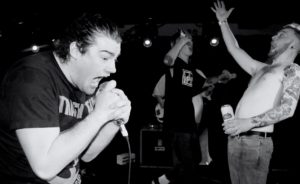 The memorial show at the Underworld [Photo: Roman Laris]

The memorial event featured a line-up she would have loved with top bands waiving fees on the night.

Tattooist Shane Kealy, a friend who designed T-shirts in her memory that sold on the night, said: “It was sad, you know, but it was really a lot of fun and a great turnout. She would have loved it. People were flying off the stage crowd-surfing into the pit. Generally you’d end up back on the stage and they get more adventurous – people were flipping and kicking off the monitor to get higher. But that’s the thing about the hardcore scene, there’s always something there to catch you.” 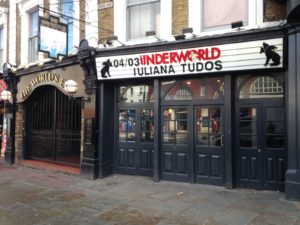 He added: “I was black and blue afterwards. I’ve still got bruises on my face and sides of my legs.”

After the show, friends went back stage and recorded a message for Ms Tudos’s parents which was taken out to her family in Cyprus this week. Originally from Russia, Julie’s family had moved to Cyprus.

Mr Kealy said: “It was supposed to be something short but it turned out to be an emotional 10 to 15-minute speech to camera from us all about what she meant to us. We wanted to show to them what her life was like in Camden Town, what her experience was like. It was extremely heavy. “It’s been crazy hard, man. I saw Agnostic Front with her at the Underworld. I remember she just sat by the cloakroom, watching it all.” 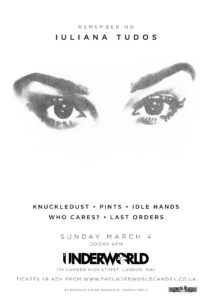 The poster for Julie Tudos

Ms Tudos was last seen wearing in an Agnostic Front hoodie leaving Camden Town on Christmas Eve. Mr Kealy was contacted by the Underworld to make the T-shirts after he spoke about Julie’s death in the New Journal in January.

The night saw Knuckledust headline with acts by Idle Hands, Pints Who Cares and Last Orders all perform Agnostic Front covers and speak about Julie from the stage. Martine Alkiviadiou, who organised the night on behalf of Underworld, said: “I’ve been putting on shows since I was 14 and this goes to show is that the hardcore punk community does look out for each other. Benefit shows are not a rare thing, sadly.” 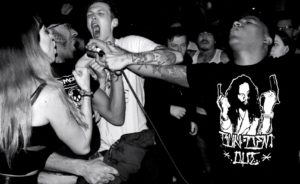 Jake Marlow, the drummer for Idle Hands and Last Orders who works for the Underworld, was one of the main organisers of the night. He described Julie as “such a bubbly person”, adding: “If she saw you were upset or pissed off she would always make sure you were all right. We’d hang out, have a drink in the Dev, or the Dublin or the Black Heart. It was a crazy night, but people had a good jump around.”