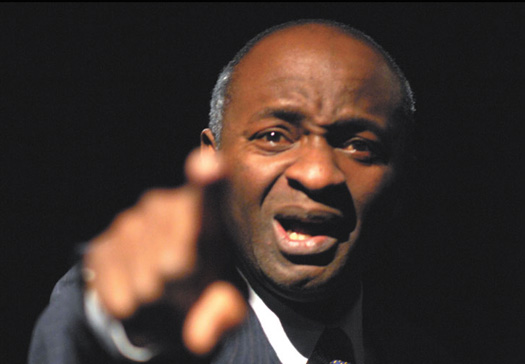 Taylo Aluko in Call Mr Robeson, which will be staged as part of the 60th birthday celebrations at Theatro Technis

The theatre’s birthday celebrations begin on May 1 with a double bill of Aluko’s Call Mr Robeson and Just an Ordinary Lawyer, both of which premiered at the theatre.

Oedipus at Colonus on May 6 and 7 is directed by the theatre’s founder and artistic director George Eugeniou, and reflects in part the vision for an alternative theatre that inspired him to abandon a promising acting career to stage dramas in a garage in Camden Mews.

A Gala Night on May 2 will include a presentation of excerpts from plays by Scene & Heard and Tower Theatre and Theatro Technis.

Lord Eric Sugumugu and The Master Drummers of Africa are included in the music programme. On May 3 there is a celebration of Cypriot culture, and on May 11 a new Camden Film Festival aimed at showcasing short films by local film makers will be launched.

As well as looking back, there will also be a focus on future plans, which include a scheme for an extension to the theatre in Mornington Crescent with rehearsal and performance studios and office space. “These will help young artists to develop their talents and fulfil their potential based on the principle that art and culture creates community,” says Eugeniou.