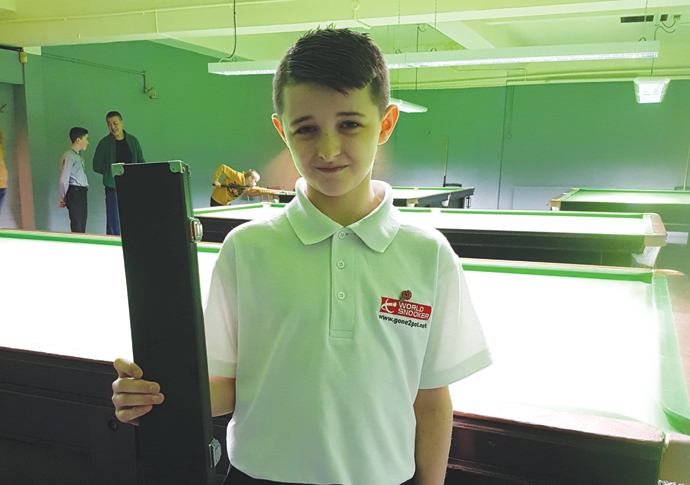 John Donovan has booked his place at the National Snooker Championships

PROMISING young potter John Donovan is preparing to take on the cream of snooker talent after earning a spot at the top table on Saturday.

The 12-year-old, who lives in Somers Town, will take his place among the 16 best young players in the country when he competes at the National Snooker Championships at the Northern Snooker Centre in Leeds.

His “unexpected” appearance at the top sporting showpiece will come as a bit of a shock after he only entered the south of England regional qualifiers on Saturday to “gain experience” playing at a higher level.

John shrugged off the title of underdog to beat two of his three rivals in the Under-14s age group at Frames Snooker Club in south London. It was enough to see him finish second in his group – and earn a place at the grand finals in May.

But what made the “special achievement” even more eye-catching was his determination. The Regent High School pupil lost his opening best of three frames match against Oliver Sykes, who is rated as one of the best young talents in the country.

Far from letting his head drop, however, John showed exceptional mental fortitude to win his next two matches, getting a highest break of 29 in the process – just three points short of his biggest-ever break in competitive action.

“I was surprised, I really didn’t think I would make the national finals,” said John, who revealed one of his favourite players is Judd Trump because of the “exhibition shots” that he always plays.

“I’m so happy and excited. I’m going to try my very best in the finals. I’m really looking forward to it.”

John started playing snooker on a regular basis two years ago when he joined Gone-2-Pot, a snooker club for children which is based at the Hurricane Rooms in King’s Cross.

Founder and coach John Woods praised all the hard work that his young protege has put in at the table.

“John has come so far over the past two years, he’s got a lot of talent and is improving all the time,” he said.

“I only entered him into the regionals to give him some experience playing at what is a very tough standard. I knew that he could compete at that level, but, as he was taking on players with a lot more experience, nobody was expecting him to qualify for the nationals. It’s a special achievement.

“John defied the odds to reach the finals, and he can defy the odds again in May. He proved on Saturday that he can handle the pressure, and has the confidence to play his own game when the going gets tough.

“At the moment he trains twice a week at the Hurricane Rooms, and when we can’t make it there we practise at Cousins Snooker Club in Holloway, Islington.

“However, now he wants to up the time that he already spends at the table and get in as much practice as possible. We’ll make sure he’s ready for the finals.”

Gone-2-Pot host snooker sessions every Saturday. Anyone keen on trying the sport can call John Woods on 07511 916 346 for more information.