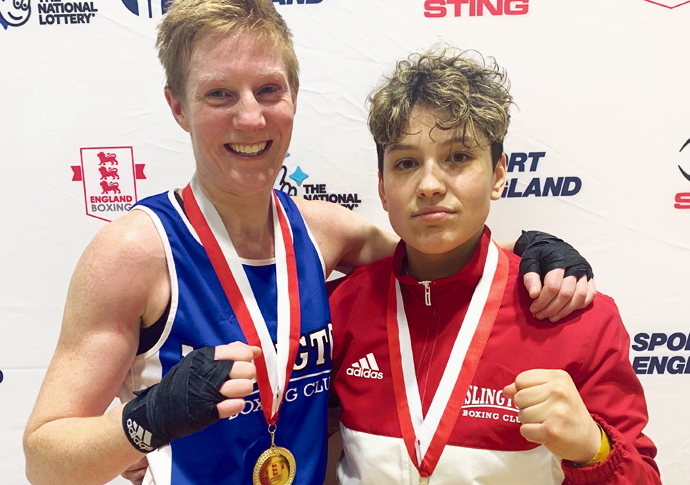 ONE of the busiest boxing clubs in the country is ending the year in a bustling blaze of glory.

Over the weekend Islington Boxing Club landed yet more success as two more champions were welcomed back to the gym in Hazellville Road, Upper Holloway.

Jem Campbell and Alexandra Petcu both fought their way to gold medals at the Women’s Winter Box Cup, which was held by England Boxing at the Guilford Spectrum in Surrey.

Competing in the Under-69kg Elite A division, Campbell stepped between the ropes on Saturday to take on Irena Ingram from Aston ABC in the semi-finals.

Campbell landed clean jabs and displayed good moving to win the opening round, but the second proved a lot closer with Ingram pressuring the Islington boxer.

In the third and final round Campbell “got back into her rhythm” as she used her reach to her advantage to gain a unanimous victory.

The welterweight returned to the ring on Sunday to face Haringey ABC’s Deayndra Allen in the final.

Both boxers enjoyed their successes, but in the end it was reigning National English Elite and three-time Three Nations Champion Campbell who was on the right end of a 4-1 split decision victory.

Along with a well-earned gold medal, Campbell was also voted the Best Elite Boxer of the tournament.

She stopped Gemma Edwards from Brighton & Hove ABC in the
second round of their semi-final contest after catching her opponent with “hooks to the head”, which resulted in the referee twice giving standing-eight counts before rightly waving an end to the bout.

In the final Petcu was just as devastating as she squared up against Edwards’ teammate Beth Dalgleish.

Islington club manager Reggie Hagland said his boxer “stalked her opponent” around the ring, “winning the first round comfortably”. Petcu upped the pressured in the second round, again leaving her rival in the ring facing two standing-eight counts before the referee stepped in and stopped the contest.

The gold medal capped what has been a magnificent start to life at Islington BC for Petcu.

Having been made to wait for her debut, the middleweight is certainly making up for lost time.

She also won gold at the National Association of Boys & Girls Clubs Boxing Championships, which were held in Altrincham the previous weekend. In only her second contest for the club, Petcu defeated Chloe Giglio from St Ives Boxing Academy to take the title.

“The club feel that this is only the start for Alex,” said Hagland. “It is very difficult to find an opponent at the right age and weight for her.”

Hagland added: “What a great end to year for both Jem and Alex, who are both reigning national champions. They are both due to box in February at the Golden Girls Box Cup in Sweden.

“We will have a much larger female boxing team for that as a lot of the girls were out for various reasons including injuries and studying commitments.”