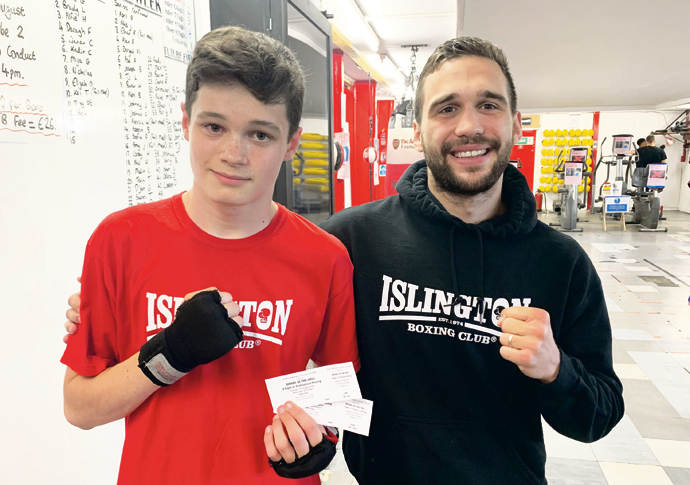 WELTERWEIGHT Slavisa Gegic will make his long-awaited professional debut on Saturday when he steps between the ropes at the famous York Hall.

And the former Islington Boxing Club (IBC) amateur won’t be alone, as in the Bethnal Green crowd will be a young boxer cheering him. That’s because Slav recently visited IBC in Upper Holloway to fulfil a tradition of past boxers from the club returning to present tickets for their big bouts to a deserving member of Islington’s Junior Competitive Squad.

On this occasion the lucky winner was Brady Loftus, who was chosen unanimously by the coaches to see Slav in action.

The 14-year-old will now go to his first professional boxing show, along with mum Dawn and dad Jim.

“I was honoured to present Brady with the pair of tickets to my debut, he is a good choice and was clearly delighted to be chosen,” said Slav.

At this stage of his career it’s common for Slav – nicknamed the “Serbian Sledgehammer” by his old clubmates at IBC – not to know who he is stepping in the ring with, as opponents often chop and change at the last minute.

But the 27-year-old is more focused on his own game than who is in the opposite corner.

“My training camp has been great, and I can’t wait to finally make my pro debut,” Slav added.

“I’m excited, but I’m keeping composed. I just want to get going.”

The big fight night this weekend, which will be promoted by Mo Prior, is set to be streamed on Fightzone, a new worldwide streaming service dedicated to British and international boxing.