In search of poetic justice 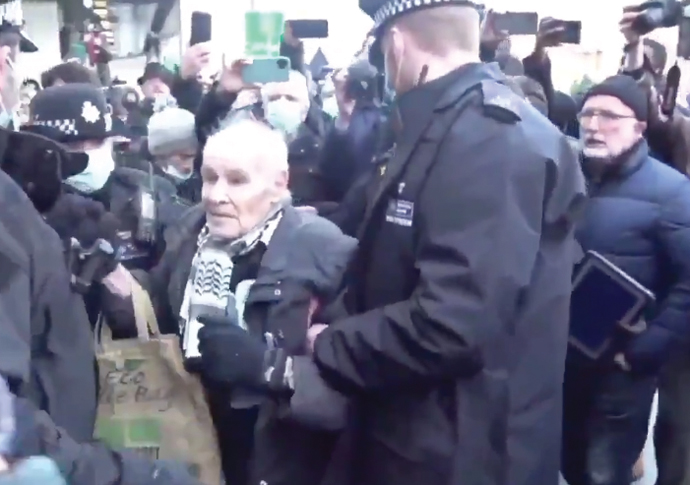 Eric Levy being taken away by police. He was protesting over treatment of Julian Assange

THIS extraordinary picture of a little stumbling gaunt-faced elderly man being arrested by several police officers at a demonstration outside Westminster Magistrates’ Court is haunt­ing. On the soundtrack from a mobile video snapped by, presumably, one of the demonstrators one can hear someone shouting: “He is 92… he will die… what are you doing?”

I was not at the demonstration that was held at a bail application by the jailed journalist Julian Assange outside the court on January 6. Assange was refused bail and is still held at the high security jail Belmarsh in south London while lawyers continue to argue for his extradition to the US on the ground that he committed espionage by releasing secret tapes.

I can confirm that the man in the picture is actually 92 and lives in the Camden Town area. I have seen him several times over the years as he is a regular presence at protest meetings and know him as Eric Levy.

He clearly has strong radical views that draw him to various causes. In the Iraq war – 17 years ago – he was among several “peace” campaigners who travelled to Baghdad and set up camp in various public buildings, such as electricity stations, to “warn” off US air attacks. But, surely, there was no need to arrest this frail old man – and the fact that so many police officers could waste their time doing so illustrates poor judgment or an unfair sense of persecution.

Oddly enough, I saw another side to Eric Levy many years ago at one of the regular evening poetry sessions that used to be run in a small community centre in Torriano Avenue, Kentish Town, by the late artist John Rety. These gatherings were usually exotic affairs where someone in the crowded small room would stand up and recite one of their new poems – and very good they often were.

In a crowded room, one session produced new poems by the great poet Dannie Abse and the avant garde poet and publisher John Calder, both of whom had suddenly appeared, to my delight, in the audience.

It was on this particular evening that suddenly Eric Levy, sitting at the back, suddenly stood up and wondered whether he could recite the Ode to Joy by the German poet Friedrich Schiller set to the melody of Beethoven’s Ode to Joy.

I wondered what was going to emerge – and, then incredibly, this little man stilled the audience as his rich baritone voice rang out the beautiful poem that sounded so haunting in its native language.

Thus, there are many sides to a person, I discovered. And as I looked at the image of this harmless elderly man being hustled away by police officers, I wondered whether he serenaded them in the cells with the Ode to Joy – it would have given them food for thought.

• According to a Met Police statement issued yesterday (Wednesday), eight people were detained “for breaching coronavirus regulations” outside Westminster Magistrates’ Court on January 6. “They were later reported for consideration of a fixed penalty notice and ordered to leave the area,” said the Met. Presumably Eric Levy was one of them.