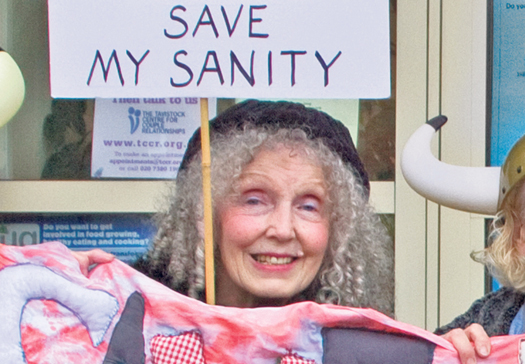 • IT is with a very heavy heart that I write this letter to mark the death of campaigner, Hampstead stalwart and friend, Barbara Law.

Barbara was instrumental in three campaigns the Friends of Netherwood group ran to save Netherwood Day Centre in 2011, 2012 and latterly in 2016/2017.

An attendee of the day centre for people with dementia, she had enjoyed many years of very happy times there.

It baffled and enraged her that anyone would think of getting rid of such a valuable place and although she had been diagnosed with Alzheimer’s in 2005 she was able to come out on to the streets when we were petitioning to speak to people about what really made Netherwood so special. Twice we were successful in our efforts.

We were very lucky to have her and I would affectionately joke that “Babs” (as I liked to call her) was our “poster girl” for the campaign.

This was not wrong, as a striking portrait taken by her daughter, the artist, photographer and fellow campaigner Sally, adorned our placards.

Come rain or shine Barbara would be there with us on the streets of her beloved Hampstead, where she had lived for 48 years, extolling the merits of Netherwood and convincing yet more people to sign our petition.

At a moment’s notice she would patiently pose for photographs and star in short films for the campaign – she was an absolute natural in front of the camera.

Right up until January 2017 she was helping us in our final, and ultimately unsuccessful, battle to save Netherwood.

I know the threatened closure of Netherwood troubled her greatly and she was deeply saddened when the final decision to close it was made last summer.

To her it just did not make sense. She loved the cosiness of the place, the staff and the garden where she would wander around deadheading the roses.

With her marvellous grey corkscrew hair and a beret sitting perilously atop it, she cut a stylish and charmingly eccentric figure.

Barbara had a fabulous sense of humour and I can still hear her infectious laugh as we joked about some absurdity or other on the campaign trail.

That her passing, aged 90, should come just a week before the closure of her adored Netherwood is almost unbearably poignant. This sad irony is not lost on us.

Dearest Barbara, thank you for your determination, courage and sense of fun. You were pivotal in helping us keep Netherwood open for as long as we did. You remain an inspiration and really were a true friend of Netherwood.