I’m not kidding, we could win this!

OPINION: Anything is possible in the FA Cup – and for some clubs the third round is still a big deal 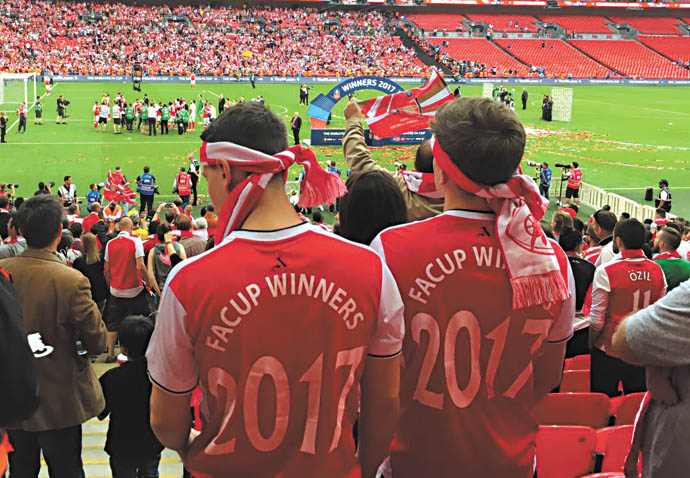 AS Mikel Arteta mulls over which members of the Arsenal Under-23 team to play against Nottingham Forest on Sunday and Antonio Conte strains to find Morecambe on a map, it’s almost easy as a Gooner or Spurs fan to forget that it’s the FA Cup third round this weekend.

The FA Cup, remember that? Alan Sunderland’s last-minute goal in 1979? Gazza’s long run-up before belting the ball past Mark Crossley? Back when if you won the Cup, it was a good season, not a caveat as you explained why Wenger should have gone. Yet to some clubs it does still matter. Nearly 130 miles away on Saturday, the lowest ranked side left in the competition, Kidderminster Harriers, will kick off against Championship club Reading. Another brief moment in the sun for a side I’ve supported for 20 years.

I blame my grandad. On Christmas Day 2001, I listened as he rang my mom to see if I wanted to see us play Rochdale on Boxing Day. I’d gone before as a four-year-old and hated it, but this time I was tall enough to see the game. It was like an addict’s first hit. Nothing was ever the same again.

For a club in the National League North, the third round is a big deal – as big as Arsenal getting to the Champions League final, or Spurs sacking Tim Sherwood.

Normally you’re only used to local newspapers and radio covering games, then suddenly you’ve got regional TV news covering the draw from your ground, BBC Radio 5 Live are sending a top commentator to summarise the game, the usually three-quarters-empty stadium is sold out, and your friends who normally take a pitying passing interest are trying to get tickets.

As you walk up to the ground, the buzz builds: “This is what it must be like supporting a big club.”

Like both north London sides, Harriers have had their share of tough times. While Arsenal haven’t qualified for the Champions League since 2016 and Spurs failed to build on their final in 2019, in my two decades I’ve seen us relegated twice, blow a two-goal lead in the first final at the new Wembley and nearly go out of business five times.

But would I swap the terrace in the North Stand at Aggborough for a seat in Tottenham’s new super-stadium?

No chance. All that hardship, real footballing hardship, means those moments are even sweeter.

We’re not expected to win on Saturday – there are four divisions’ difference. But on that walk to the ground, seeing the floodlights loom in the distance, the mindset of an addict takes over.

“If we can keep them out early on, and start to wear them down…” Suddenly, anything is possible.