‘If anyone deserves a statue it is Claudia’

Who actually deserves to be remembered in the form of a statue? Angela Cobbinah makes the case for black activist Claudia Jones

AS statues are being torn down or removed in the wake of international outrage over the brutal police killing of George Floyd, a conversation has begun about which figures might replace them or be commemorated separately.

Claudia Jones, whose elevation into public consciousness over the years is due largely to the efforts of grassroots campaigners, already stands as a strong contender.

Trinidad-born Jones lived and died in Camden after being jailed, then deported from the US in the 1950s for being a Communist and has gone on to play a pivotal role in the civil rights struggle over here.

As racist violence erupted on the streets of Notting Hill, the monthly newspaper she founded, the West Indian Gazette, became the voice of the unheard, selling more than 30,000 copies with its news and analysis that linked the plight of early black migrants to the international campaign for social justice.

“It was a kind of house journal for migrants,” remembers the author Donald Hinds, who worked as a reporter on the paper in between his job as a bus conductor.

“It debated, detailed and explained what was going on in the black community at a time when many of us felt confused and lost.” 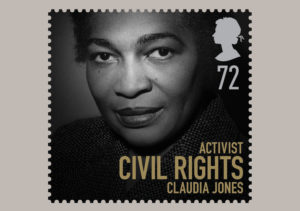 As a visionary leader she brought carnival to London, starting off with a dance at St Pancras Town Hall in 1959 to “wash away the bad taste of Notting Hill from our mouths”, she said, adding, “a people’s art is the genesis of their freedom”.

Yet following her untimely death in 1964 at the age of 49 – her health ruined by her year in a US jail – Jones swiftly sank into obscurity. At her request she’d been buried next to Karl Marx’s tomb in Highgate Cemetery but, incredibly, the woman once described by Paul Robeson as “one of America’s finest daughters” lay in an unmarked grave.

In 1982, Camden Council youth worker Winston Pinder launched a campaign to raise money for a stone to be erected. As a member of the Communist Party’s Caribbean committee, Pinder had been part of Jones’ official welcome party when she arrived in the UK in 1955 and would go on to sell the West Indian Gazette outside Kentish Town tube station after collecting copies from Jones’ home in Lisburne Road, Gospel Oak.

I was one of the young people who took part in the campaign, which managed to raise the required £1,500 through dances and letter-writing appeals. Carved out of polished Cornish granite and bearing the inscription “Valiant fighter against racism and imperialism”, the stone was erected in 1984 in a ceremony attended by the Cuban and Chinese ambassadors. Only the Camden New Journal recorded the event – in a report written by me.

A year later, the late black activist Buzz Johnson brought out his tribute to Jones, I Think of My Mother: The life and times of Claudia Jones, via his Karia Press. It would take a decade for another work on Jones to be published. By this time, Black History Month, launched in the early 80s from the dying embers of the Greater London Council, had become a fixture on the UK calendar, helping to further reclaim the civil rights heroine for posterity.

In 2008, Jones reached the political mainstream when her handsome features appeared on a UK postage stamp as part of the Royal Mail’s “women of distinction” issue. In the same year, a plaque was unveiled in Notting Hill in tribute to Jones as one of the “first ladies” of carnival with the support of Nubian Jak, an African Caribbean charity.

Until recently, a campaign for a blue plaque to be erected by English Heritage at Lisburne Road had fallen on deaf ears. It has now at last been approved but it remains to be seen when it will see the light of day.

Nelson Mandela’s statue in Parliament Square and bust on the South Bank are probably the best known monuments to a black individual in the UK. But in the last decade, six statues of black Britons have been installed, two of them of women – Crimea War nurse Mary Seacole outside St Thomas’s Hospital and Olympic gold medallist Kelly Holmes in her hometown of Tonbridge.

“If anyone deserves a statue it is Claudia,” says Pinder. “Although persecuted by the US authorities, she played a decisive role at a turning point in British history without any hesitation. Claudia could barely climb Parliament Hill for want of breath but never stopped working for what she believed in.”

However, he believes that statues are only part of the debate: “It is much more important to learn about a person and what they stood for. To my mind, a school named after Claudia would be a much more significant contribution to remembering our shared history.”