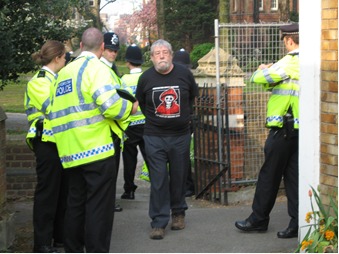 THE booming West Country voice of union man Ian “Mac” McDeson sounded out on hundreds of protests during a life devoted to better building site conditions.

A bricklayer by trade, he founded the Construction Safety Campaign and for many years worked for Camden Council’s building department, in retirement helping out at the London Hazards Centre in the old Hampstead Town Hall, Belsize Park.

Mac was a folk and jazz music fan who was a regular at Cecil Sharp House and had organised a commemorative tree and annual event for the singer Ewan MacColl in Russell Square, Bloomsbury.

The long-standing member of UCATT died aged 82 on April 23 in Marie Curie Hospice.

Born in a working-class family in Swindon, Wiltshire, Mr McDeson moved to London to be closer to the jazz scene and for work as a bricklayer.

He met his future wife Barbara in a folk club at the Three Horse Shoes pub in Hampstead and the couple were married in 1966, first living in Mal­den Road before moving to Harmood Street, Camden Town, where they stayed for 50 years.

Barbara said: “He came to London because he wanted to expand his experience and know­ledge for work on the many building sites. He always said you’ll have to carry me out of Camden Town, and that’s what has happened now.

“Basically, for Mac the union was everything – but he enjoyed music, travelling and we would go to the theatre too. He was always happy with whatever we saw, whether it was serious, or musical. I could take him wherever I wanted. We were regulars at Upstairs at the Gatehouse and the Tower Theatre.

“He was cheerful with everybody. He always greeted people even if he didn’t know them. He was a larger than life character. He had an amazing boom­ing voice, except he didn’t use it much for singing.”

Tony O’ Brien, who was secretary of the Construction Safety Campaign from 1988-2013, said: “I first recall Ian about 1966 when I saw him at the regu­lar London area Sunday meetings held by our union, which I atten­ded with my father at Conway Hall in central London.

“You could not fail to notice Ian as he spoke with this West Country accent which boomed all around the hall. I was involved with him in meetings of trades union activists held in London and nationally when we were making preparations for what became the greatly successful 1972 building workers’ strike.

“Ian at that time worked as the convenor of Camden Council building workers direct labour organisation [DLO]. During the strike, to his great credit, he called a meeting of the approximately 1,500 Camden DLO building workers and persuaded them to act in solidarity and join the strike.

“While there was no financial gain for his members from taking such action, Ian was only too well aware that a success for private sector building workers would act to strengthen the struggles of all building workers including the substantial numbers, who at that time, were employed in council-run DLOs.”

Mac launched himself into the campaign for better workplace safety following an increase in worker site deaths and serious injuries in 1988.

At the time, large numbers of union members and reps were blacklisted and Mac was involved in all the struggles to get these injustices recognised.

He had supported the family of Ralph Kennedy, a scaffolder electrocuted while working on a council estate refurbishment in Oakley Square, Somers Town.

He also joined the protests outside the Francis Crick Institute in Brill Place after steel worker Richard Laco was killed in 2013 and in support of Crossrail worker Renè Tkáčik, who was killed by falling dumps of concrete in 2015, leading to a £1million fine for the company’s contractors.