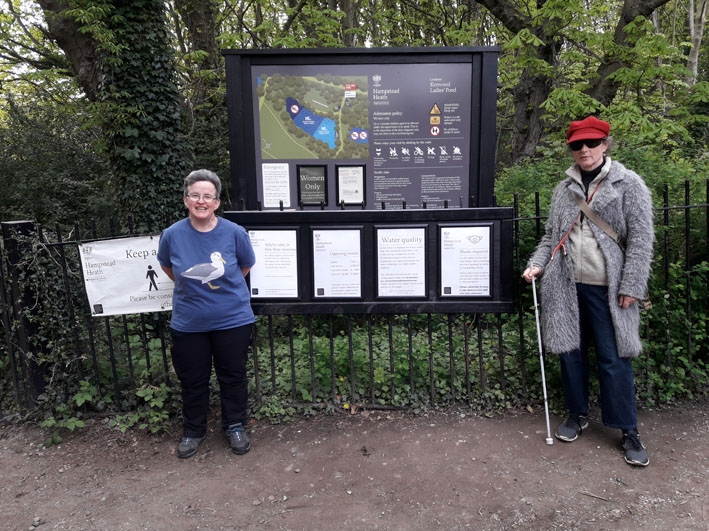 Mary Powell from the KLPA, left and Ann Griffin outside the Ladies’ Pond front gate

LAWYERS representing women swimmers have written to the City of London Corporation to challenge the imposition of new charges at Hampstead Heath’s bathing ponds.

The Kenwood Ladies’ Pond Association (KLPA) says the introduction of increased  and compulsory charges has disproportionately harmed disabled swimmers and those on low income.

The group claims this is unlawful and has issued a ‘letter before action’ – the first step before applying for a judicial review of the decision to bring in the fees.

Represented by the Leigh Day law firm, the Association, along with swimmer Ann Griffin, who is registered blind, says the increased charges for swimming at the ponds – agreed last February – discriminates against swimmers under the Equality Act 2010 and interferes with swimmers’ human rights due to the physical and psychological benefits of cold-water swimming.

The City of London, which manages the Heath, denies these claims and insist a fair support scheme is in place.

It said last year that it needed to raise the price of a swim and make the fees compulsory to help pay for improvements. A safety review following the drowning death of a man in the ponds had recommended more lifeguards being posted to the ponds.

Ms Griffin said:  “I have swum at the Kenwood Ladies’ Pond for over 20 years, and through the winter for four.  It has been a fundamental part of my health and wellbeing.  In the last year the new charging and booking arrangements have made this so difficult for me due to health and financial reasons.”

She added: “I have had to depend on the financial help of others to be able to swim there at all, and cannot imagine how I will be able to continue to do so.  The bathing ponds are therapeutic for so many people, which everyone has always been able to use free of charge, like a beach.

“As financial difficulty was never a barrier, the Ladies’ Pond has been an inclusive community. But this is now being destroyed by an infrastructure of inflated compulsory charges and online booking, so many like me are now excluded.”

The Association has called for a self-policing day ticket to be restored or at least to be trialled this summer, encouraging payment from only those who can afford it. It says there should also be free access for those on benefits and low income, and no charges to swims for under-16s and over 60s at any time of day instead of just early mornings.

It has also argued that the new charging regime will ruin the culture of the bathing ponds and that women, the elderly, disabled swimmers and certain ethnic and religious minorities – including Jewish Orthodox women and Muslim women – are likely to be disproportionately affected by the changes.

A spokesperson for the Association said: “The KLPA believes that the City of London has disregarded the important role of the swimming ponds in the traditional fabric of life on and around the Heath and the ways in which local people use them. The ponds are part of the natural environment; local people have swum in them for centuries in the same casual way as those who live by the sea might take a daily dip while walking on the beach.”

Leigh Day solicitor Kate Egerton said: “Our clients are passionate about protecting the Hampstead Heath Ponds for the use of everyone who wants to use them, regardless of their financial means. They believe that by pricing many swimmers out of access to the ponds, the City of London Corporation has discriminated against their members and deprived many swimmers of an important aspect of their private life as protected by the European Convention on Human Rights.”

A spokesperson for the City of London Corporation said: “We deny any suggestion that the decision to bring in charging for swimming at the Bathing Ponds is discriminatory or unlawful. Charging for access to sporting and recreational facilities in public open spaces is a longstanding and recognised practice, supported by clear statutory powers by public bodies across the country.

“Hampstead Heath is a registered charity and its swimming facilities are accessible to people of all abilities and backgrounds.

They added: “The charity is providing subsidised swimming with fair pricing, with concessions bringing down the cost of adult swimming to as low as £2.43 per swim. For concessions, including disabled people, a season ticket is as low as £1.46 a week. These charges are reinvested to ensure that affordable, safe and sustainable access to outdoor swimming is available to as many people as possible for generations to come.

“We offer a comprehensive Support Scheme including free swimming for under 16s and over 60s. And concessions apply to people in receipt of State Benefits including: Universal Credit, Job Seekers Allowance, Personal Independence Payments and Housing Benefit as well as people with a Freedom Pass; Disabled Card; Students and Under 16s.”