HS2: Two protesters come out of tunnel but siege at Euston continues 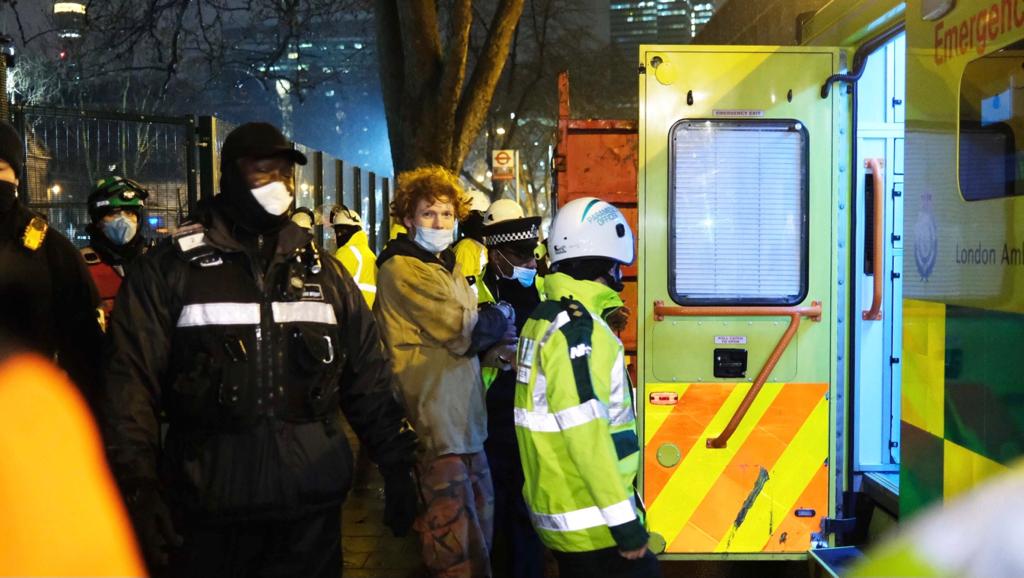 TWO protesters have come out of the tunnel dug beneath Euston Square Gardens but the demonstration aimed at stopping HS2 works is not over yet.

Lazer Sandford was pictured being taken by police to an ambulance after leaving voluntarily. He was later arrested.

His sister, Blue, remains below ground.

Meanwhile, a candlelight vigil was held for trees felled to make way for the High Speed Two project, which threatens two decades of demolition and disruption in Camden.

HS2 Rebellion said in a statement that Mr Sandford, 20, had left after securing concessions, such as lights, sanitary and hygiene products for his fellow activists who remain in the tunnel.

Mr Sandford’s emergence followed an almost two-day struggle by National Eviction Team (NET) officers to break him out of a ‘lock-on’ he had attached himself to at the bottom of the downshaft.

The night before, on Friday, another tunneller named Rollie left the underground camp due to “ill health”. 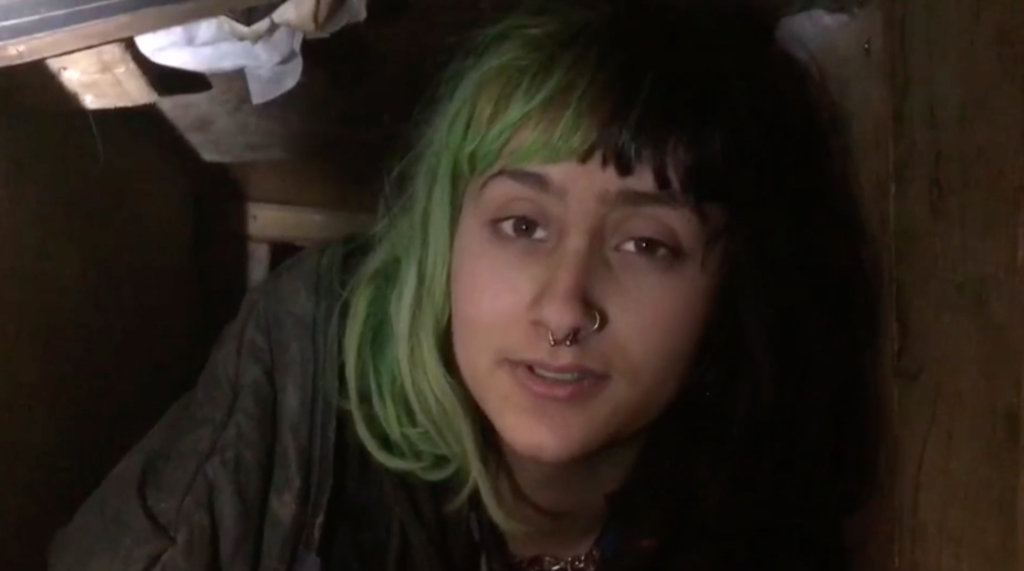 Rollie, 17, before leaving the tunnels

The vigil took place on Saturday from 5pm with the group thanking police for allowing them to go ahead with the event without those who attended being arrested or fined.

Saturday – the eleventh day of activists occupying tunnels beneath the park – marked the longest UK tunnel occupation since the 40 day all-time record set by protesters against the £90million A130 Rettendon bypass in Essex in 2000.

Extinction Rebellion have returned again today (Monday) in support of the tunnelers, also staging a protest outside the Health and Safety Executive offices in Westminster.

As well as standing above and displaying signs on the entrance to Caxton House, they have set up a display showing bailiffs stepping on and cutting out protesters from the tunnels while a HSE officer apparently stands and watches. 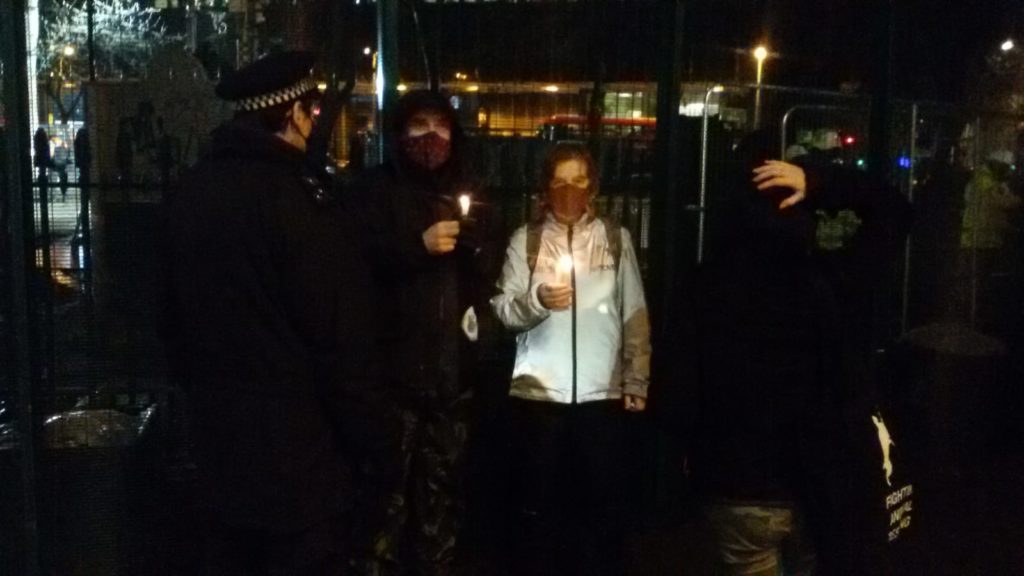 The group has continued this week to criticise the methods and behaviour of bailiffs, publishing a letter written by lawyers on behalf of Dr Larch Maxey to the Health and Safety Executive on January 30, in which they detail how the contractors are putting them in danger.

The operation of heavy machinery above ground near the tunnels,  contractors’ work on the downshaft and the dismantling of the tower above the tunnel, known as ‘Buckingham Pallets’, said to be putting them at risk of a tunnel collapse. 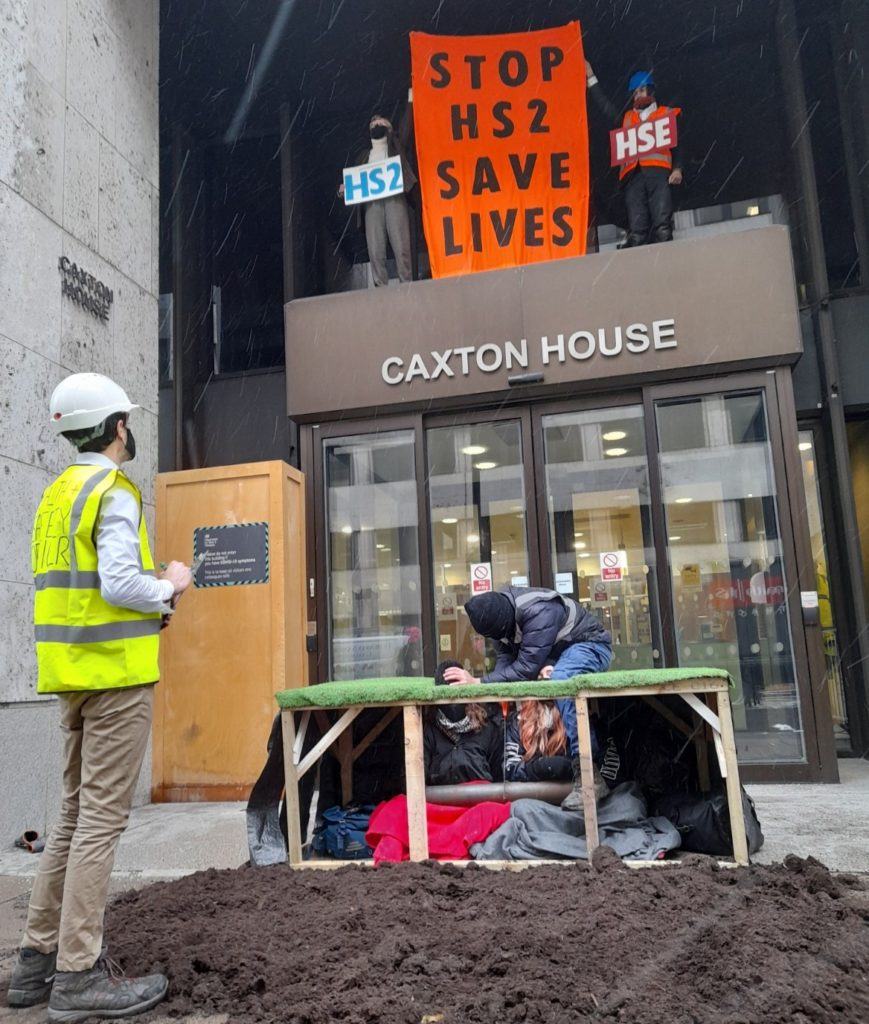 The group was ordered to stop tunneling and tell authorities the exact number of protesters in the tunnels after taking their concerns to the High Court in an attempt to get an injunction,

A statement from HS2 Ltd said: “If Dr Maxey does not comply with the order to leave the tunnel (or the other obligations) – he will now be in contempt of court (potentially punishable by a fine, up to two years in prison or both).

“To date, Dr Maxey has not complied with the order, and we urge him to do so as soon as possible – for his safety and the safety of the other activists and the HS2 and emergency personnel tasked with removing the illegal trespassers.”