Activist is back above ground after almost four weeks 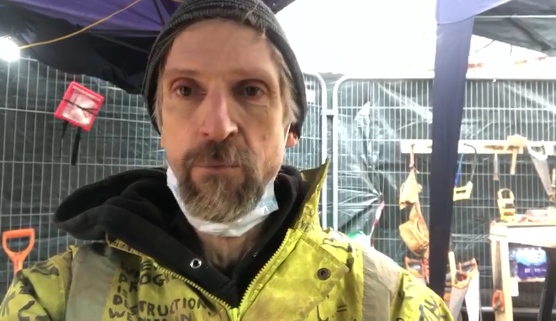 A VETERAN activist has been evicted from a HS2 tunnel protest after almost four weeks underground.

Dr Larch Maxey was surrounded this morning by security officers who had breached his section of the tunnel beneath Euston Square Gardens over the weekend.

Around 9am this morning, he said: “It’s one day short of four weeks and I have been evicted. Basically I have met my match. They’ve come for me.

“They’ve got all my stuff, they have me backed into a corner. I’ll be coming out in next hour or so. My understanding is they don’t have a possession order – but it’s a fait du complit.

“It’s time for me to regroup and see what’s next. We need to help the people who are still down there, and stop the ecological emergency and stop HS2.”

Once above ground, he added: “I’ve been seen by the paramedics. I feel healthy and fine. I’ve been active down there, lots of physical exercise and eating really well.

“To be honest the paramedic said he would sleep better if I went to hospital, so I’m going to go.” 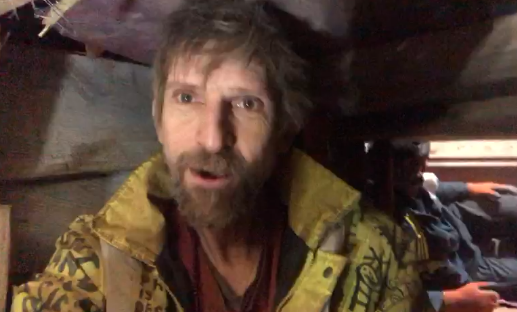 Speaking from the tunnel this morning

Dr Maxey is the latest environmental campaigner to leave the tunnel that was dug in secret from a protest camp in Euston Square Gardens.

The others have been arrested and charged with offences including aggravated trespass and for breaching the trade union act.

HS2 has possession of the land and had wanted to axe mature trees so it could build a new taxi rank for the station.

The tunnel protest was drawing attention to environmental damage of the £106billion railway overall.

A statement by HS2 Ltd – the company set up by the government to run the project – said: ““As part of the ongoing operation at Euston Square Gardens we have successfully removed Dr Larch Maxey from the tunnel.

“He was taken out from the tunnel and has been assessed by paramedics. He has been handed over to the Metropolitan Police and will likely face criminal charges for aggravated trespass or other related offences.

“He has also been in breach of a High Court Order for some time now, for which civil proceedings may well follow as this breach constitutes contempt of court.

“The safety of those trespassing and that of the HS2 staff and emergency service personnel in this operation is of paramount importance.

“We continue to do all we can to end this illegal action safely, and we reiterate our message to those who remain underground to comply with their court orders and exit the tunnel immediately – for their own safety and that of the HS2 staff, agents and emergency service personnel involved in this operation.”