How backroom team help give Arsenal an edge

From nutritionist to masseuse, boss reveals roles crucial to success 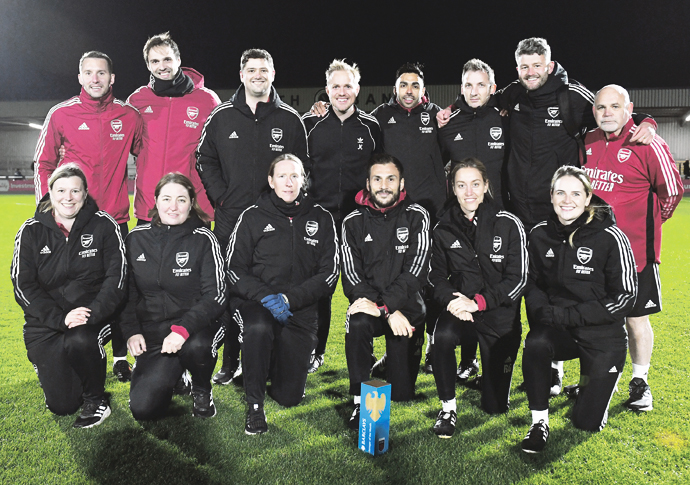 Jonas Eidevall (back row, fourth from left) celebrates his second successive FA Barclays WSL manager of the month award with his backroom staff

THE advances in staffing levels for some women’s football clubs in the professional era were thrown into focus this week after Jonas Eidevall scored yet another award.

The Arsenal boss has now won back-to-back FA Barclays Women’s Super League manager of the month gongs, and to celebrate he posed with 13 members of his backroom staff.

That is enough for a first XI, plus substitutes, who would actually amount to five subs given that the club’s masseuse, nutritionist and head of medicine and sports science missed the photo opportunity.

Remarkably, none were appointed by Eidevall. Even so, the 38-year-old Swede says he is enjoying the challenge of managing a team of players and staff.

“I never worked with so many staff before,” he said.

“That was one of the things I was excited about, getting to join Arsenal.

“The benefit is obviously that we can cover a lot of areas, we can work with the players on many different details in order to enhance our performance, both at group and individual level.”

Before his summer switch to Arsenal, Eidevall was a three-time league and Swedish cup-winning manager with Rosengard, and he says he sat in on every staff and player meeting.

“Now there’s a lot of meetings that I’m not inside and I can’t be, because then we can’t be as effective in working here as a staff team,” he added.

“But I like that and I like the challenge that that gives me on my leadership, and I maybe need to lead even more through my staff, not only directly to the players.”

Eidevall says any initial concerns that so many staff voices could confuse his message to the players have been allayed by the “intelligence” of his group.

“So far I think that has been brilliant,” he said.

“We’ve been discussing things together, we’ve put clear messages in, and I feel like we all have a really clear understanding about the basic points that it is really important for us to get across.”

Spurs boss Rehanne Skinner, who twice won the WSL, FA Cup and League Cup at Arsenal as assistant to Laura Harvey between 2010 and 2013, has also benefited from greater staff numbers.

“Back in the day, we basically just had a family member filming the game off the top of a Portakabin for us,” she quipped.

“Things have evolved, but it’s been a massive help, and the more you embrace it, the better the players get and the performances improve.

“You’ve got experts in a host of different fields. We’ve needed to have those staff in order for the game to get to where it is today – it’s definitely added huge value.”

Arsenal skipper Kim Little chalked up a half-century of WSL goals with a brace in the 4-0 win over West Ham on Sunday that maintained the Gunners’ unbeaten run.

Beth Mead and an own-goal completed the scoring for the league leaders, who were away to Danish side Koge in the Champions League last night (Wednesday) ahead of a visit to Spurs at The Hive in Barnet on Saturday.

Tottenham, third in the table, go into that clash – to be broadcast live on the BBC – having pulled back a point against Manchester United on Sunday through Ria Percival’s last-gasp equaliser. The match ended 1-1.

Emma Hayes’ second-placed Chelsea follow their 1-0 win over Aston Villa on Saturday and 7-0 thrashing of Swiss side Servette in the Champions League on Tuesday, with a visit to Man City on Sunday, which will be shown live on Sky.