‘I know some of you won’t like idea of having a colony of mozzies and rat-tailed maggots in your garden, but don’t worry’ says the BBC’s Justin Rowlatt 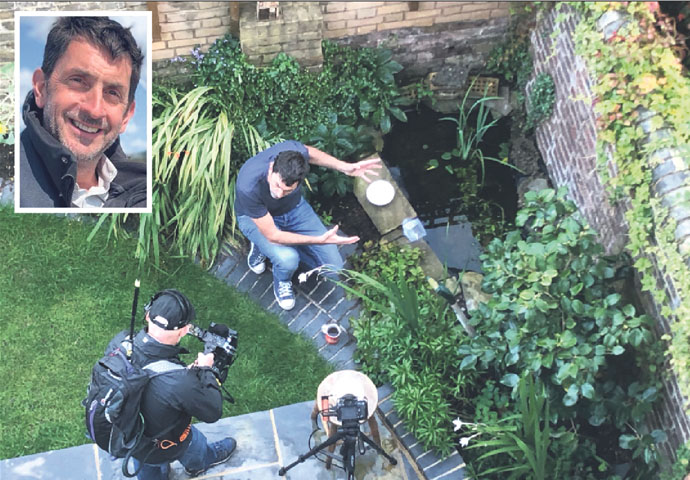 I’VE reported from some extraordinary places as a BBC correspondent.

The West Antarctic ice sheet, the Mongolian steppe, the jungles of Brazil, and even a frozen river on the Himalayan plateau.

But last week was a first for me. I reported live from the tiny pond I’d created in my small back yard in Camden.

I’d been asked to find ways we can all help make nature more resilient to climate change as part of my job reporting on the environment.

I put a call in to the Wildlife Trust to get some advice. I thought we would have a long discussion about all the different things I could do but there was no hesitation: “dig a pond”, the press officer urged me.

Ponds give a bigger boost to biodiversity in your garden than anything else you can do, I was told. It doesn’t have to be big. Even a dish on a window sill can be a haven for wildlife.

My wife agreed I could clear one corner and after less than half an hour of digging I had made the hole. I covered it with some thick plastic pond lining – it cost twenty quid – and filled it up with water from the hose.

Then I popped in some native British pond plants I had ordered online. The whole thing took an hour, tops!

For a week nothing happened. The mud from my planting settled but the water was clear and lifeless. Then I spotted my first visitor, mosquito larvae. I’ll be honest, over the next couple of days they flourished.

I know what you are thinking, but I was assured by my new friends at the Wildlife Trust that they were almost certainly avian mosquitos and therefore don’t bite humans.

My wife, Bee, was sceptical too.

Then came tiny black water beetles, squiggly red worms and some wonderful creatures called rat-tailed maggots. And yes, they look exactly as they sound, but they become hoverflies.

I found the drama of my wonderful new watery world utterly compelling.

My kids teased me because I would spend so long kneeling by the pond just staring into the water. It seemed virtually every day a new creature would find its way into the pond.

I know some of you won’t like idea of having a colony of mozzies and rat-tailed maggots in your garden, but don’t worry.

I had created the wildlife equivalent of a tasty soup and pretty soon I spotted flashes of shimmering copper-red among the plants beside the pond. Damselflies – a downsized dragonfly – had discovered my little haven.

I’d watch them darting over the surface of the water and occasionally, when I lay still for long enough, I managed to spot them mating and even using their long, shiny, bodies to lay their eggs under the leaves of my now flourishing pond plants.

Damselfly babies are called nymphs, which makes them sound like Greek goddesses, but these beetle-like creatures are actually voracious predators.

Even when they were tiny I’d see them darting after the mosquito larvae and, within a couple of weeks of the first damselfly sighting, the mozzie population was well under control.

It was one afternoon in late July that I heard a scream from the garden. Bee was calling me. She’d spotted something new in the pond. We had frogs, and four of them!

Our pond had become “a local neighbourhood of wildlife”, as Catherine Cullen from the London Wildlife Trust put it when she visited to check progress.

Catherine says the more wild plants and animals there are the better able they are to adapt and survive as our climate changes. So if you want to build a bulwark against climate change I have two words of advice for you: get digging!

I can’t guarantee that your pond will feature on TV but I can assure you watching it evolve will be much more compelling than anything you’ll see on the telly.