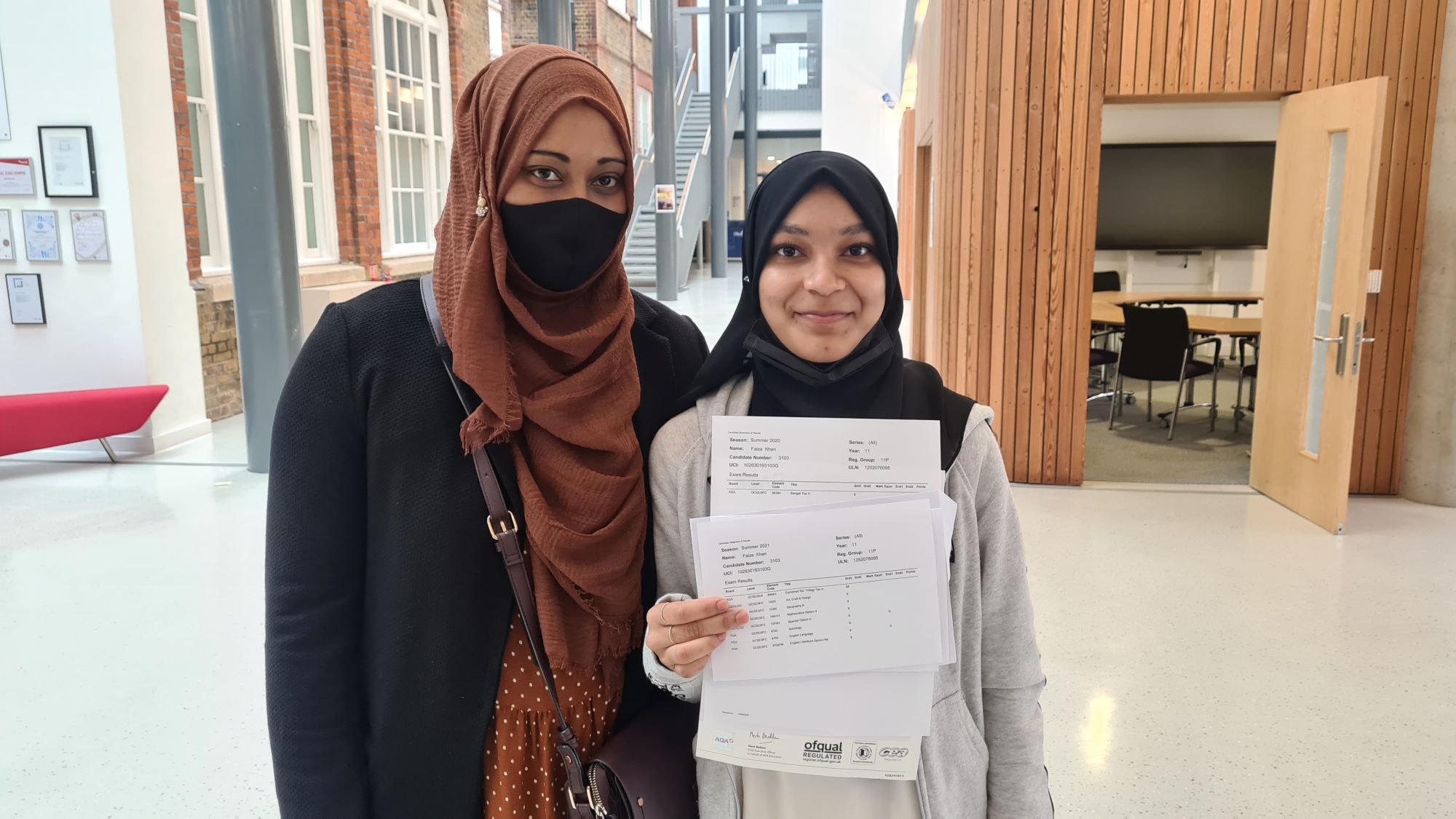 A HEADTEACHER has told pupils collecting GCSE results to be proud of their marks and not to listen to claims of “grade inflation”.

In the second set of national exam results being given out this week, excited teenagers were opening envelopes at schools across Camden. Screams of joy were met with hugs, high fives and handshakes from delighted friends.

There were more top results in Camden than compared to the rest of the country, as 33 per cent of grades were at grades 7 or above, equivalent to the A and A* grades in the old system. Nationally the figure was at 30 per cent.

The grades across England were an improvement on the 27.5 per cent in 2020 and 22 per cent in 2019, the latter being the last time formal exams were held before the pandemic.

Concerns were raised in the wake of results that schools, who had decided on their own form of assessment and marking for pupils, had given them artificially high scores.

Gary Moore, head at Regent High School in Somers Town, told pupils receiving their grades that they had earned them.

“Ignore what you’re hearing on the news. Grade inflation has not happened in this school, our systems and processes are absolutely robust, these are the grades you deserve.” 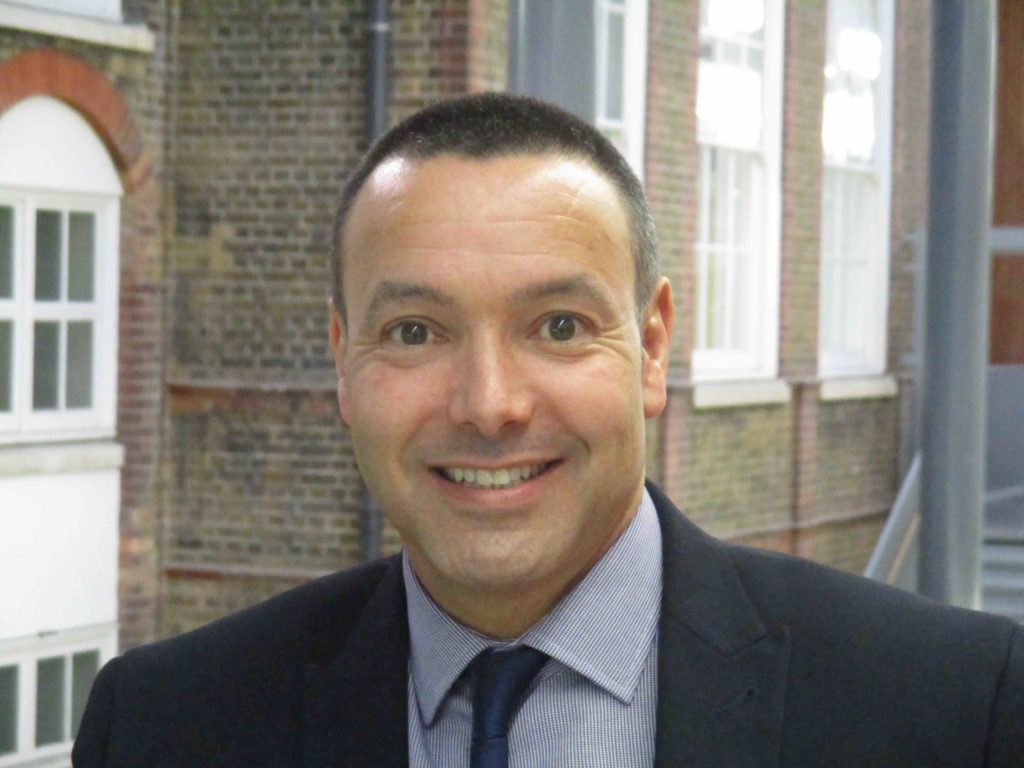 Speaking to the New Journal at the school in Chalton Street he added: “It’s totally unhelpful when people talk about it. I can see it and hear it and ignore it but they can’t, and they’ll worry about ‘do I deserve this?’.”

All the hallmarks of learning in the age of Covid was there. Teenagers talking from behind face masks about the isolation they had found away from their friends, the unpredictability of three national lockdowns, and having to study and revise in overcrowded homes.

Faiza Khan, 16, from nearby Aldenham Street, got three grade 9s, five 8s and two 6s. “I didn’t know what to expect,” she said after opening her results. “We missed a lot of time in school, and learning at home was really difficult, the pandemic affected us.”

She added that she had found it difficult trying to learn from home with her parents and four siblings in a two-bedroom flat. “It was very hard to do home learning at home in limited space with the internet, it was quite hard. I wasn’t able to do it sometimes.”

The 16-year-old, who will study Psychology, English Literature and Geography at the school’s sixth form had attended results day with her mum, Rahima Begum. She praised the school’s teachers and leadership, as well as her husband, Faiza’s dad Mohammed Khan who had helped her with her Bengali studies.

“The school has created an environment for the children to get these results. Gary [Moore], Richard Harrison [assistant head] and Mr Shahid [head of year] have done an amazing job, and without their work they wouldn’t have got the same grades,” she said. 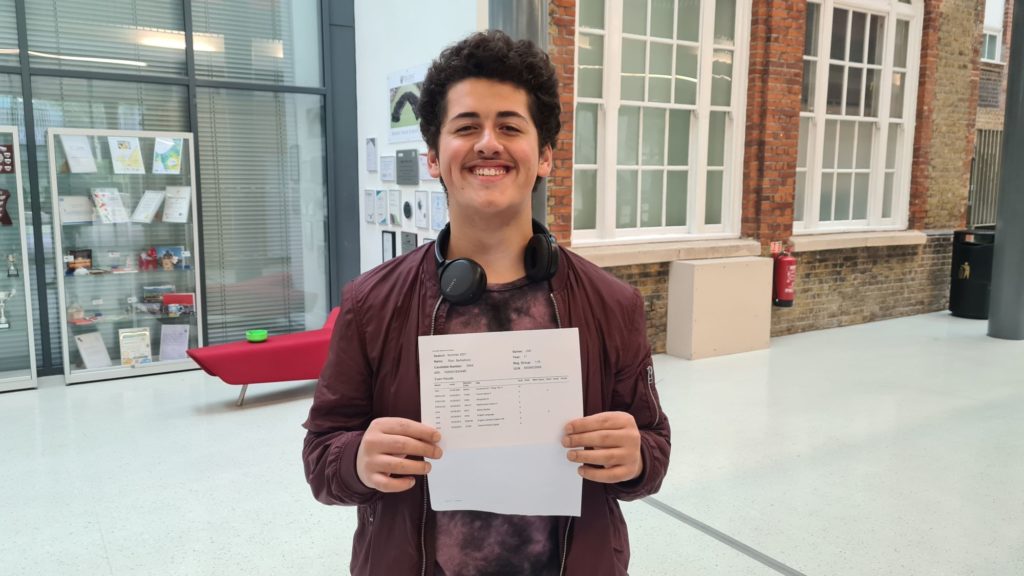 Rion Barbatovci with his results

Another of those who was jubilant despite the challenges of Covid-19 was Rion Barbatovci. The 16-year-old was mobbed by his friends after getting his results, as his classmates walked over to nervously collect theirs.

Rion, who lives near Drummond Street, said he was ecstatic at getting his two grade 9s in English among a set of stellar results. He said his attempt to knuckle down had paid off.

“When I opened the envelope I just saw two 9s and didn’t believe it. In Science I got an 8 and a 7 which is crazy because my two weakest subjects were my best. I thought it was touch and go with Maths about whether I’d fail and I got a 6.

“At the start of Year 10 I was getting 3s and 2s and I’ve turned it around. I used to mess about a lot and I’ve stopped that, well I still stick to talking, I can’t keep my mouth shut!

I was revising every day for two hours in a morning before school when we were remote learning and when we got back we had loads of support.”

He paid testament to his friends who had helped him get through his exams. “The pandemic wasn’t a good point and I lost contact with a lot of people, but when things lifted I got in touch with them and made new friends and thank god for them, it wouldn’t have been possible without them.”

Elsewhere at Acland Burghley, students queued up on Thursday morning to collect the envelopes that held grades earned in the most strangest of circumstances.

Teacher Dixie McLean, the schools head of Key Stage Four that covers the GCSE age group, told the New Journal students had gone through a unique experience – and it made their achievements all the more worthy.

She said: “They have shown real resilience and perseverance. They had to adapt quickly to a different mode of assessment – and its testimony to their commitment that they deserve the standards they reached.”

And while the 16 year olds missed out on a teenagers rite of passage – the revision, the exams, and the relief once completed – the school made sure their final weeks of secondary education were just as memorable with trips to Thorpe Park and a West End art gallery.

Student Amir Battye said he was pleased to have gained high marks after a disrupted year. He said: “I outdid my expectations. Many of us felt everything about our assessments were sprung on to us quite late. We wanted to know what we were meant to be revising, but the government just were not clear what was going to happen. Our school and our teachers worked really hard and were brilliant in difficult circumstances.”

Julian Schani, who plans to take Maths, English and Physics A-levels at Camden School for Girls, said working remotely had been tough – but had also helped students with independent study. He added: “The thing I missed most was coming in to school and seeing everyone.”

The warning signal for next year has already been sounded by schools minister Nick Gibb on Thursday morning, as many youngsters were anxiously getting ready to go and find out their grades. He told broadcasters that grades would be adjusted ahead of next year’s exams.

Mr Moore said he was not worried about what could happen to exams or grades for next year.