After guiding her side to Champions League final, Chelsea boss ready for WSL title pursuit 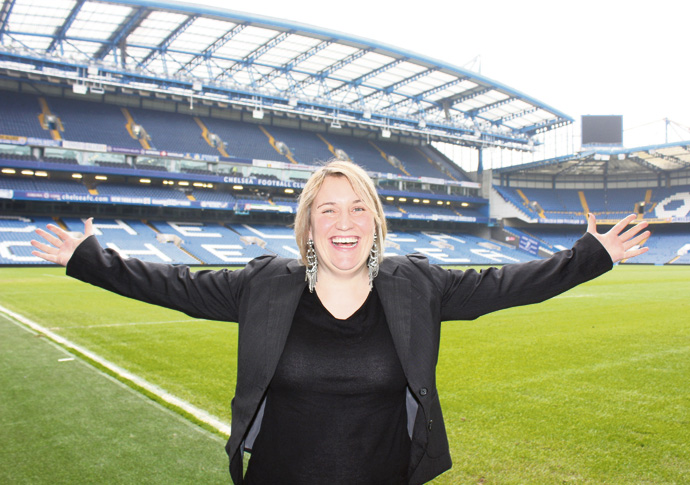 CHELSEA boss Emma Hayes was filled with emotion on Sunday as she raised a glass of champagne to the victory that put her team into a showpiece Champions League final.

The first Englishwoman and only the third female coach to achieve that feat, Hayes had seen her team turn around a first-leg defeat to overcome Bayern Munich in a blistering encounter at Kingsmeadow.

Crucial goals from Ji So-yun and Pernille Harder were sandwiched between a Fran Kirby brace as Chelsea beat the German outfit 4-1 on the day and 5-3 on aggregate.

For Hayes, who was Vic Akers’ assistant when Arsenal claimed the European title in 2007, it was the culmination of “thousands of hours” of work. It was also the realisation of a dream she had held as a child playing in imaginary cup finals on the Curnock Street Estate in Camden Town.

The 44-year-old added that she hoped Chelsea’s achievement would inspire girls to dream of hitting the heights in the sport as she had.

But as she held back the tears, the former Parliament Hill School pupil was also conscious of the Women’s Super League title battle that lay immediately ahead.

“We have to deliver on both fronts,” she told the New Journal.

“I want to win the league as much as anything, that’s your bread and butter. That’s what Vic [Akers] taught me.”

Hayes’ former club, Arsenal, are not quite ready to put the jam on their season. But on Sunday, a coolly taken penalty by Kim Little at the death secured a 2-1 win over Everton that has all but clinched European football for the club next term.

This weekend’s “Super Sunday” will settle matters, with the final day of matches deciding not just the battle for Champions League places, but the title winners too.

The Gunners would have to lose to strugglers Aston Villa and see Manchester United beat Everton by double figures for their position in third place to change.

“It’s more a goal-difference scenario,” said Arsenal head coach Joe Montemurro. “It needs to be a big win for United. They are playing Everton and we’ve seen how difficult they are to break down so, mathematically you never want to say that it is [settled], but we’re pretty confident.”

Nerves are more likely to be frayed as the scrap to be crowned WSL champions goes down to the wire.

Chelsea hold the cards after a much-changed side from the weekend still managed to clinically beat Tottenham last night (Wednesday) to leapfrog rivals Manchester City and return to the summit.

Goals from Australian Sam Kerr either side of the break put the Blues in the driving seat at the Hive in Barnet.

And that 2-0 victory sees Hayes’ team sit two points clear at the top.

“It’s a job done and credit to the whole squad for getting another win for us,” said Hayes afterwards.

All the London club now need to do is hold their nerve and take all three points at home to Reading on Sunday and the title is theirs.

“We have to win the game, this is a cup final for us and I will approach it as such,” Hayes added.

“My job is to make sure we are 100 per cent into winning that game.”

Wednesday’s defeat leaves Rehanne Skinner’s Tottenham in eighth with 17 points, their survival guaranteed with one game remaining, away to Birmingham City.