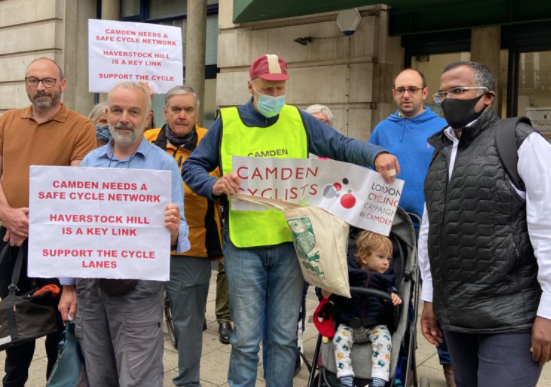 Cyclists outside the Town Hall this evening (Thursday)

BIKE lanes in Haverstock Hill will be installed after the latest – and possibly last – challenge to the scheme was defeated this evening (Thursday).

Backbench councillors asked to review the policy under the council’s ‘call-in’ process voted to support the new cycle safety measures.

Opponents to the cycle route are now running out of options, although the threat of legal action remains in the air.

In reality, there was little surprise that the Culture and Environment Scrutiny Committee backed the scheme – it is a cross-party panel of backbenchers but the ruling Labour Party hold the majority of its members.

The vote – 5-1 in favour of pushing on with the works – follows a year of arguing over the project.

Cyclists have celebrated the proposals as providing a safer route on the hill from Chalk Farm to the Royal Free Hospital. Businesses, however, say that customers will not be able to reach them and they are at risk of closure.

Other claims have included that the lanes will slow down ambulances trying to reach the hospital, add to pollution by causing a gridlocked road and the view that the stiff gradient of the hill will put people off cycling that way.

The experimental scheme has already stalled once after a judicial review was threatened and Camden agreed to run a new consultation. The results of this survey proved controversial as a majority of people living close to the hill did not support the changes.

At tonight’s meeting, dentist Mervyn Druian said the future of businesses located on the hill were at risk.

He described how difficult it would be for the severely disabled and those in wheelchairs to come to appointments if a cycle lane stopped them from being driven close to a ramp at the front door.

Mr Druian said: “As a healthcare professional, I’m very well aware of the demographics of my patients. Many are elderly, many disabled, a number in fact are in wheelchairs. They won’t be cycling up the hill. There must be other routes for the cycle lanes.”

He added: “We’ve got a glazier next door and they carry these huge panes of glass in and out of their shop onto their vehicle. Cycle lanes are going to make that impossible as well. I’m petrified for my practice. I fear that we will end up closing and we’re going to have another charity shop on Haverstock Hill.”

Amit Shah, who lives on Haverstock Hill and had launched the legal challenge earlier this year, said: “This consultation should not be about simply ticking boxes to get the scheme to go through. But it should be about actually hearing what people in the local community want. It’s overwhelmingly clear that they do not want this cycle lane in its current form.”

The call-in was triggered by the Conservative opposition, led by group leader Councillor Oliver Cooper.

He stressed that while he believed the Haverstock Hill scheme should be cancelled, he was not opposed to a cycle lane in the area.

“We’re asking instead that an alternative route be taken,” he said. “We lay it out: going up to the Royal Free and South End Green by Maitland Park and then Fleet Road. That wouldn’t have the steep incline. I wouldn’t suggest that the route goes up on Pond Street but the entrance of the Royal Free is not at the top of Pond Street, it’s at the bottom of it.”

He said that Department for Transport guidance for cycle infrastructure recommended that people should not be tackling gradients of 3 per cent for longer than 80 metres – but the hill route was 1,200 metres at this steepness.

Cllr Cooper said: “There is a democratic process and we should do what residents say. That principle is at stake tonight. Camden did reluctantly consult the public and 78 per cent of businesses 69 per cent of local residents objected to it. The three main residents’ associations in the area, as well as the ward councillors representing all three political parties on this council objected to it. So again, it’s not a political matter. It’s a community matter.”

He added: “It’s vital that residents see that requests are listened to and this committee democratises this process and gives their voice real value. If you don’t listen to them here in Belsize Park, we’re not going listen to them in Regent’s Park. If you’re not listened to in Haverstock, they’re not going to listen to you in Holborn or Highgate or anywhere in between.”

His party colleague Steve Adams warned that faster cyclists would get frustrated with slower cyclists on the hill and then dangerously pull into the carriageway.

He told the meeting: “The underlying impression, unfortunately, that I find from this whole proposal –and I would love it to be changed – is that unfortunately this is cycle lanes being used to restrict motor use and I find that really quite infuriating.”

The committee also heard from strong supporters of the scheme.

Dr Mark Hayden from Great Ormond Street Hospital said that medical staff had more and more turned to cycling as a way of getting around during the coronavirus crisis – and they required protection.,

He told the meeting: “Many people are obviously afraid of cycling in London – and I think that’s a very sensible fear. If you look at the literature from the whole of the UK, you are more likely to die or you are more likely to become disabled from trauma if you do cycle. However, you’re less likely to die of cancer or heart disease. So our staff were basically making a choice of of how potentially they would die.”

Mr Hayden added: “I think that’s a courageous choice for them to make. I think it’s similar to the choices they had to make to come to work at all at the beginning of the pandemic, when PPE and knowledge was in short supply. And obviously the country pulled behind the NHS and clapped on the streets, but too quickly some of that has been forgotten, as are some of the deaths that have occurred to NHS staff on the streets while cycling in London.

“One of the things that shocked me so much about hearing that this scheme was in the balance was how closely it occurred to the death of a paediatrician 500 metres from our hospital.”

He was referring to Dr Marta Krawiec who died after a collision at a notorious spot in Southampton Row, Holborn, earlier this month. A ‘die in protest’ was held last Friday in her memory and six other cyclists who died on the route.

John Chamberlain, coordinator of the Camden Cycling Campaign, said: “We are extremely disappointed that, particularly in a month with a tragic fatality in Holborn and a serious injury in Adelaide Road, there are councillors who oppose it. We have declared a climate emergency. We have to take all possible measures to encourage walking, cycling and other environmentally responsible modes of travel. Haverstock Hill is a key link in Camden’s planned cycle network and has been in the transport strategy since 2018.”

He added: “It will enable the thousands of people who live in Belsize Park and beyond, in Hampstead, to cycle safely up and down the hill at their own pace rather than being hassled by motor vehicles or trucks against parked cars.”

“For most of the route, there is no loss of road space and cycle lanes are, we believe, a much better use of the road space than car parking. Most visitors to Haverstock Hill arrive on foot, cycle or use the nearby tube and bus connections.”

Mr Chamberlain said that opponents had “played on the fears of businesses owners and residents, making unsubstantiated claims about the resulting disruption”.

Camden’s environment chief Councillor Adam Harrison – the council’s face of the borough’s new roadmap – said: “It really shouldn’t be only the brave who feel able to cycle. We need to be able to make our streets safe and open for everybody. If there was any other public service that we were providing here in Camden, where we knew there were underrepresented groups from which people were too afraid to use the service, we would be doing absolutely everything we could do.

“We know that women, for example, are much less likely to cycle unless there is clear segregated space. So I think we should apply that principle here as as we do anywhere else.”

He added: “The idea that if you’re living in Belsize Park or Hampstead you should be denied a safe space to cycle is not acceptable. From my point of view, we need to be rolling this space out everywhere in the borough.”

Cllr Harrison said it was “disrespectful” to suggest that the Tories’ alternative route had not been considered.

“I think probably we all know actually that they’re proposing this as a distraction from the fact that they are trying to prevent safety measures from coming in, in Belsize Park,” he told the meeting.

“The difference between the two is they don’t go to the same places. They are not alternatives. So if you want to get from Chalk Farm to Belsize Park and Hampstead and back again, then they [the Tory group] would prefer you not to have anywhere safe in which to do this.”