Veteran actor Harry Landis has worked with them all. But the Unity Theatre holds a special place. Angela Cobbinah talked to him 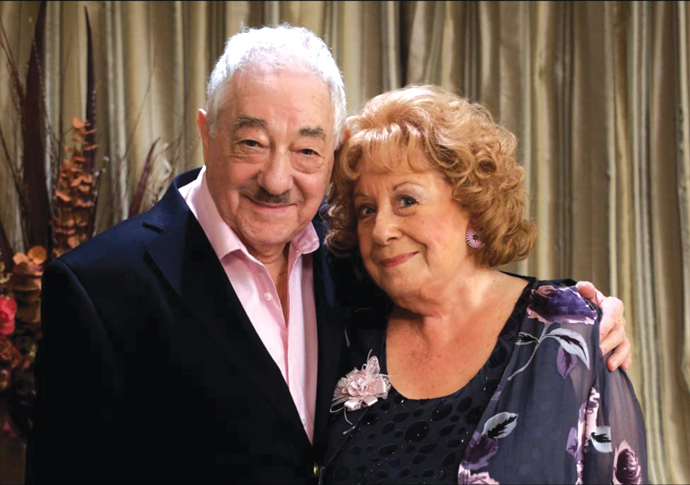 AGED 89 and three quarters, Harry Landis is a real character, full of anecdotes from an acting career that stretches back more than 60 years. He’s been in almost everything you can think of, from TV dramas to Hollywood blockbusters. But despite a CV as long as your arm, today he’s probably best known for his role as the obnoxious Mr Morris in cult Channel 4 sitcom Friday Night Dinner.

“That ended seven years ago, but I still get people stopping me in the street to get a selfie with me,” he laughs.

Having grown up dirt poor in the Jewish East End where he also had to run the gauntlet of Mosley’s Black Shirts, Harry’s interest in drama arts goes far further than mere performance. He is a past president of Equity and currently chairs the Unity Theatre Trust, which flies the flag for the pioneering theatre in Goldington Street, Somers Town, that burned down in 1975.

It was here that Harry started out at the age of 15, rubbing shoulders with other working class youngsters like Bill Owen, Alfie Bass, Michael Gambon and Warren Mitchell.

“The Unity was an amateur theatre with very high standards and produced some wonderful actors who would probably never have had the chance of going to drama school unless they were very lucky. I owe a huge debt to it.”

We’re chatting in his comfy flat near Spitalfields Market, just a walk away from where he grew up in Stepney, the only child of a Polish mother and a father who ran off when he was a baby.

“It’s gentrified now but in those days Spitalfields was a fruit and veg market and I used to go there to try and pick up a stray cabbage or some potatoes.”

Another port of call was the Jewish Soup Kitchen on the other side of the market. “I went there with my mother holding me in one hand and a saucepan in the other. Mum had to plead her case with the Jewish Board of Guardians, all businessmen from north London who acted as though she’d let the side down for being poor. They didn’t have a clue about life in the East End,” he says.

When he left school at 14 Harry took the well-worn route to the factory gates. And there he might have stayed were it not for his impromptu theatrics during tea-breaks gleaned from shows he’d seen at the Hackney Empire.

“I was a bit of a show-off,” he says, laughing again. Impressed, his shop steward took him along to the Unity, which had been set up in the 1930s to stage dramas reflecting social and political issues.

“We saw a play about a busmen’s strike by Ted Willis called All Change Here. The actors spoke my language as if they lived on my street and I was knocked out.”

Soon, he was performing at the Unity. “After work each day, I would go there, rehearse till 10, go home and do the same the next day. All this for no pay. But it was a wonderful thing to be part of.

“You’ve got to remember that theatre in those days meant sophisticated plays about posh people by playwrights like Noel Coward, playing to audiences in evening dress. I like to think that the Unity contributed to the revolution that took place in theatre in 1956 when the first kitchen sink drama was staged at the Royal Court Theatre.”

He became part of that new wave when he took the lead role in The Kitchen by Arnold Wesker, whose background was similar to his own. “He grew up in Spitalfields, just round the corner from here,” Harry tells me. Arthur Miller’s Death of a Salesman and Clifford Odets’ Awake and Sing! were other stand-out moments in his stage career.

He made his TV debut in the opening episode of Dixon of Dock Green in 1955. A year later, both he and Michael Caine shared first movie credits in A Hill in Korea. Fast forward to 1995, with primetime favourites like Minder and Crown Court behind him Harry was back on the small screen as Polish barber Felix Kawalski in EastEnders for the next two years.

Inevitably he’s knocked around with some of the biggest names in the business. Laurence Oliver: “He wasn’t Larry he was Sir Larry and people were afraid of him”; Richard Burton: “When he started out he was in a dream world. Once he realised what showbiz was all about he became hardened and cynical”; Tom Cruise, with whom he appeared in the 2014 film Edge of Tomorrow: “He was really friendly.”

One of Harry’s heroes is Paul Robeson, who appeared on the Unity stage in 1938 in Plant in the Sun and returned to the theatre more than 20 years later to see it reprised after the US authorities restored his passport. Harry was in the cast. “I took him back to his hotel. He was very charming but had this haunted look about him. He was a wonderful person who never wavered despite what they did to him.”

We chat on and on. There is so much to say. “You should write a memoir,” I tell him. “I will, as soon as I settle down,” he replies.