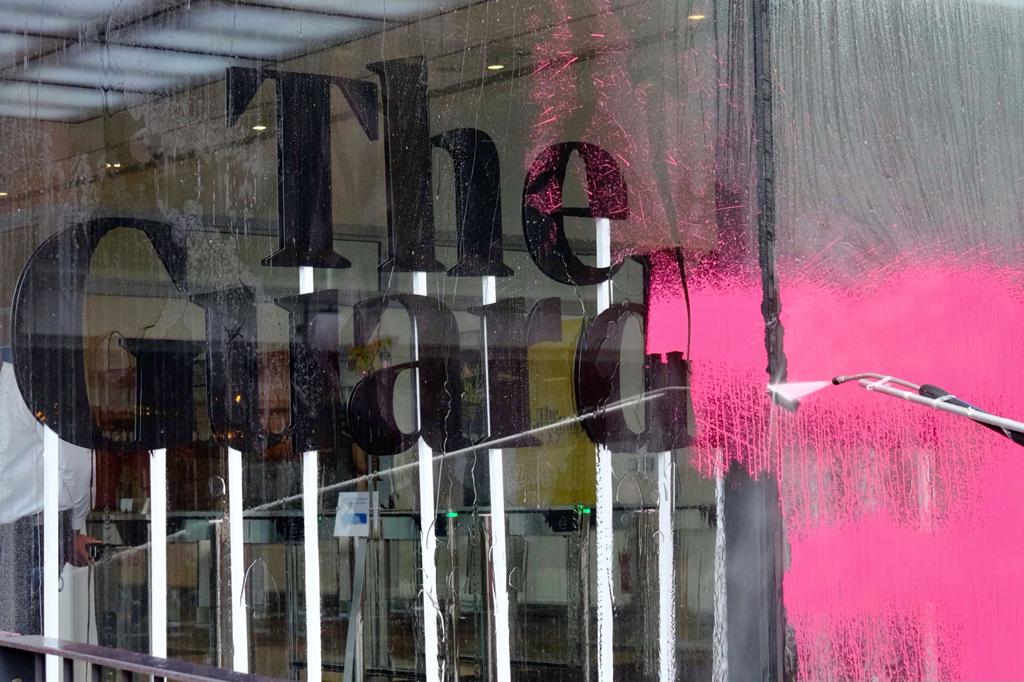 The Guardian offices have been sprayed with pink paint [SIMON LAMROCK]

THE Guardian newspaper’s offices have been sprayed with neon pink paint this afternoon (Friday) – the day after a similar attack on the HS2 offices in Euston.

A video of the stunt was posted online on the Burning Pink Party’s Facebook page, the party of London mayoral candidate Valerie Brown.

It is claimed on the site that Ms Brown’s campaign manager, Ram Salgado-Touzon, sprayed the newspaper’s head office in York Way, King’s Cross.

The footage shows a man, identified as MrSalgado-Touzon, using a fire extinguisher to plaster the building’s facade in  paint. 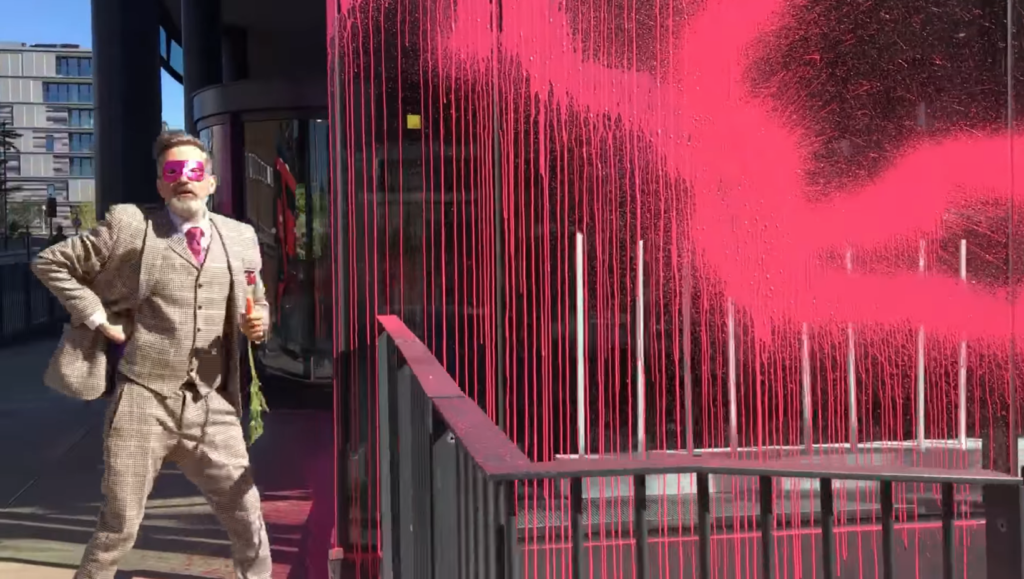 Activists said they had targetted The Guardian “to account for breaking their climate pledge” and showing an “utter failure” to report on Ms Brown’s campaign.

Ms Brown said “In a democracy the freedom of the press is one of the cornerstones of a just society. The media needs to be fair and balanced and if it’s not then it’s propaganda. The so-called liberal paper The Guardian is no longer upholding a balanced and fair style.”

Mr Salgado-Touzon, wearing a three-piece suit with a bright pink tie and eye mask, was seen afterwards posing by the paint eating a carrot.

Staff are now attempting to power wash he glass frontage.

A similar protest unfolded outside the HS2 offices in Eversholt Street yesterday (Thursday). 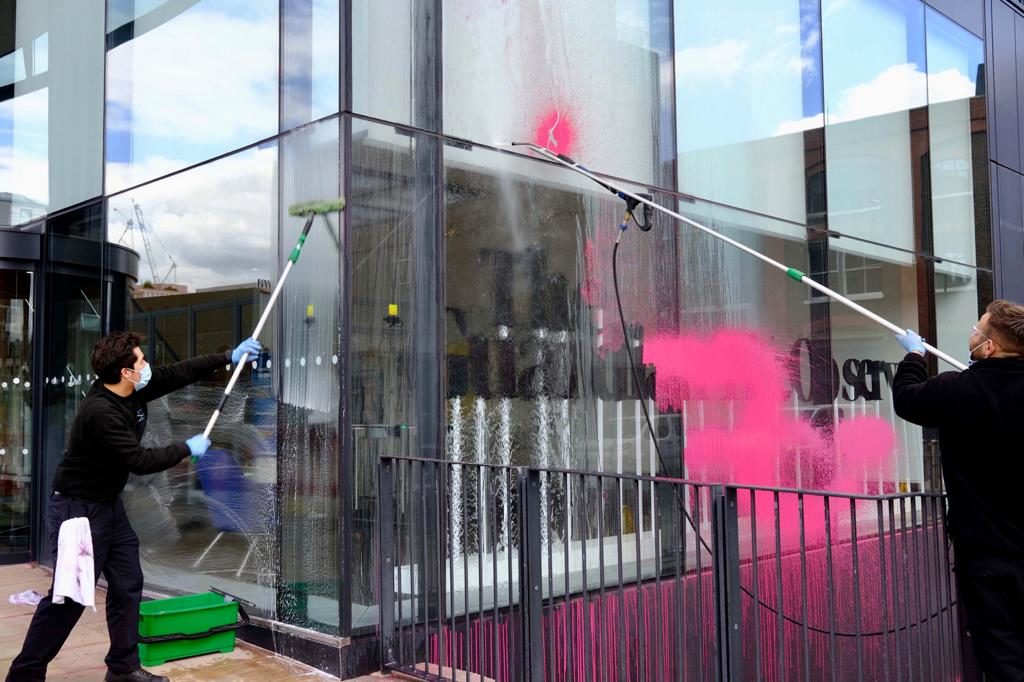 Staff attempt to clean the paint from the windows [SIMON LAMROCK]

Two anti-HS2 campaigners and supporters of Ms Brown, Dr Larch Maxey and Xavier Gonzalez Trimmer, climbed on top of the entrance to the railway company’s London headquarters which it shares with Network Rail.

They both used fire extinguishers to cover the office in pink paint and then remained there overnight refusing to get down until at least one of their demands were met. 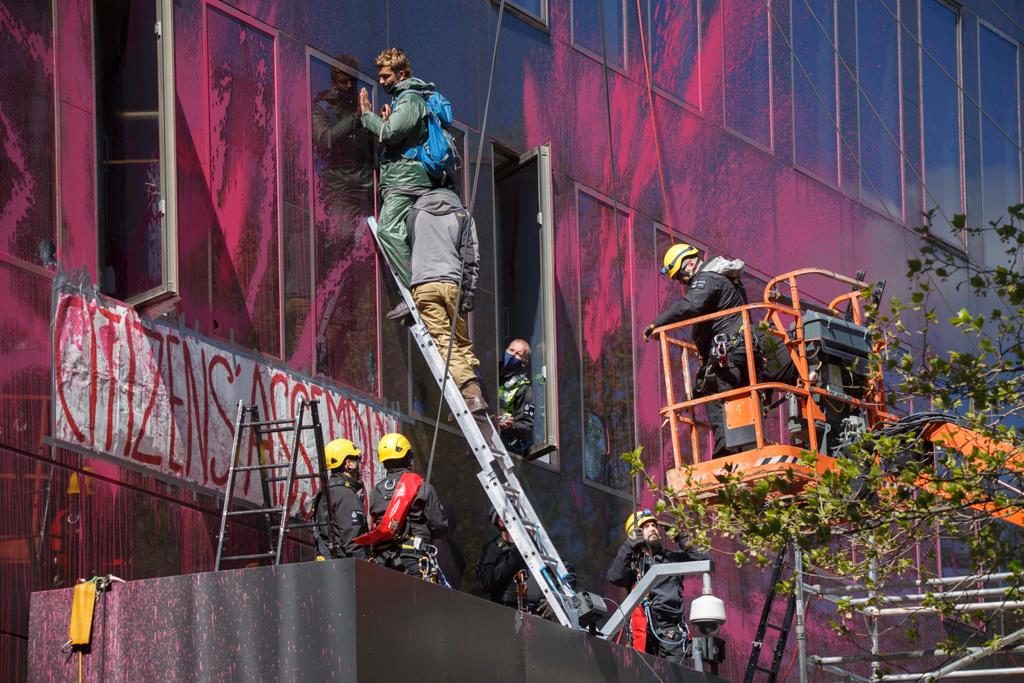 Ms Brown’s campaign has centred around creating a ‘Citizens Assembly’ to “divest power from out of touch politicians and hand decision making power to the people”.

Both Dr Maxey, 48, and Mr Trimmer, 20, were arrested at around midday by the British Transport Police on suspicion of aggravated trespass, criminal damage with the intent to endanger life, and possession of intent

A BTP spokesperson said: “Our specialist Working At Heights team were deployed to ensure their safe removal,  and they will now be taken to police custody for questioning.” 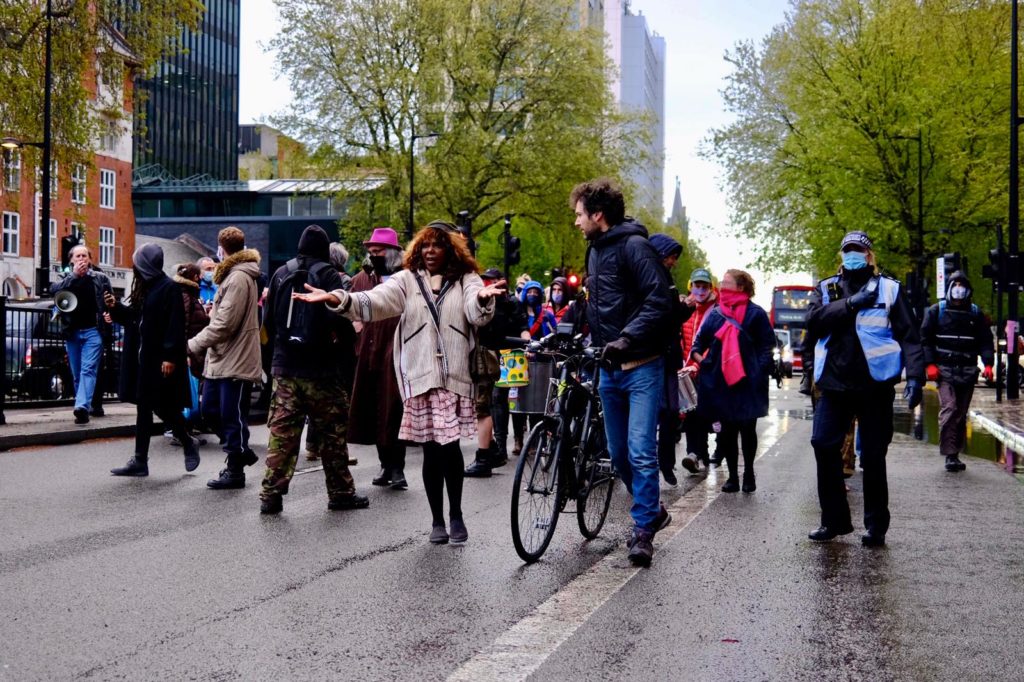 It is unknown yet whether the men will be charged with an offence.

It appears both incidents were staged to promote Ms Brown’s campaign, whose slogan is ‘The Last Mayor of London’, as it would be her aim – if elected – to implement legally binding Citizens’ Assemblies in place of the Mayoral system.

The Met Police and The Guardian have been contacted for comment.