Time limit on tenancies is scrapped, amid high demand in borough with fewest allotment spaces in the capital 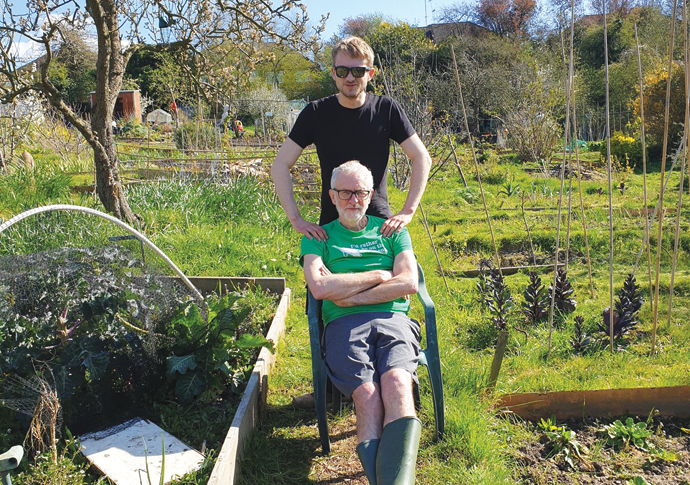 Jeremy Corbyn and his son on his allotment

THE Town Hall is to bin its time limit on holding allotment tenancies – but will be urged to find more spaces for community growing.

Islington had told plot users that they could stay for a maximum of 10 years in a policy drawn up in 2011 amid an ever-increasing waiting list.

But the council said it would no longer be following those rules after surveying those with allotments and people hoping to get one.

The demand, however, remains high as illustrated by Lynne Friedli, of Mayton Street, Holloway, who said she had been trying to get a tenancy for “30 years”. When applications finally opened again on April 1 this year, she put hers in at “one minute past midnight”.

The 67-year-old said: “I got a response saying I was now at number 156 on the waiting list. This means, at a rate of seven allotments given out per year, I’ll be 89 before I get to the top of the list.”

She added: “The same will apply to hundreds of other Islington residents on the waiting list, in addition to thousands of families who have lost hope of ever having a place to grow stuff.”

Ms Friedli and her neighbour Helena Farstad have submitted plans to the council to allow residents to “repurpose” car parking spaces with planters.

Well known for spending his own days off tending a plot in East Finchley, he said he had been lobbied by allotment holders who had opposed the time limit on tenancies.

“I recognise that allotments should be shared out – the problem is there is so much demand,” Mr Corbyn said. “I’d like to see more community grow­ing spaces in places like school playgrounds and parks. And an end to efforts to build over allotments that are protected but sometimes fall through the gaps.”

Islington has the fewest number of allotments of any London borough. The council manages four allotment gardens, three around Finsbury Park in Evershot Road, Monsell Road and Quill Street and one just off Holloway Road in Pollard Close.

When the 10-year limit policy was first introduced there were 270 people on the waiting list with only 57 plots available and applications for new entries had been closed for five years.

Between 2011 and 2017 the council has managed to increase the number of allotments by dividing up each plot when a tenancy becomes available.

Phil Gomersall, president of the National Allotment Society, told the Tribune: “You take up an allotment for the long term. The council shouldn’t have brought in the time limit in the first place.”

Each allotment tenancy in Islington is reviewed every year to ensure the holders are maintaining the area to a high standard.

Cllr Rowena Champion, Islington’s executive mem­ber for environment, said: “We are determined to create a greener Islington, and the provision of allotment plots is a key part of our vision for a healthier, more environmentally-friendly borough that can achieve net zero carbon status by 2030.

“We have listened to plot holders and those on the waiting list, and believe our proposed policy is fair.”