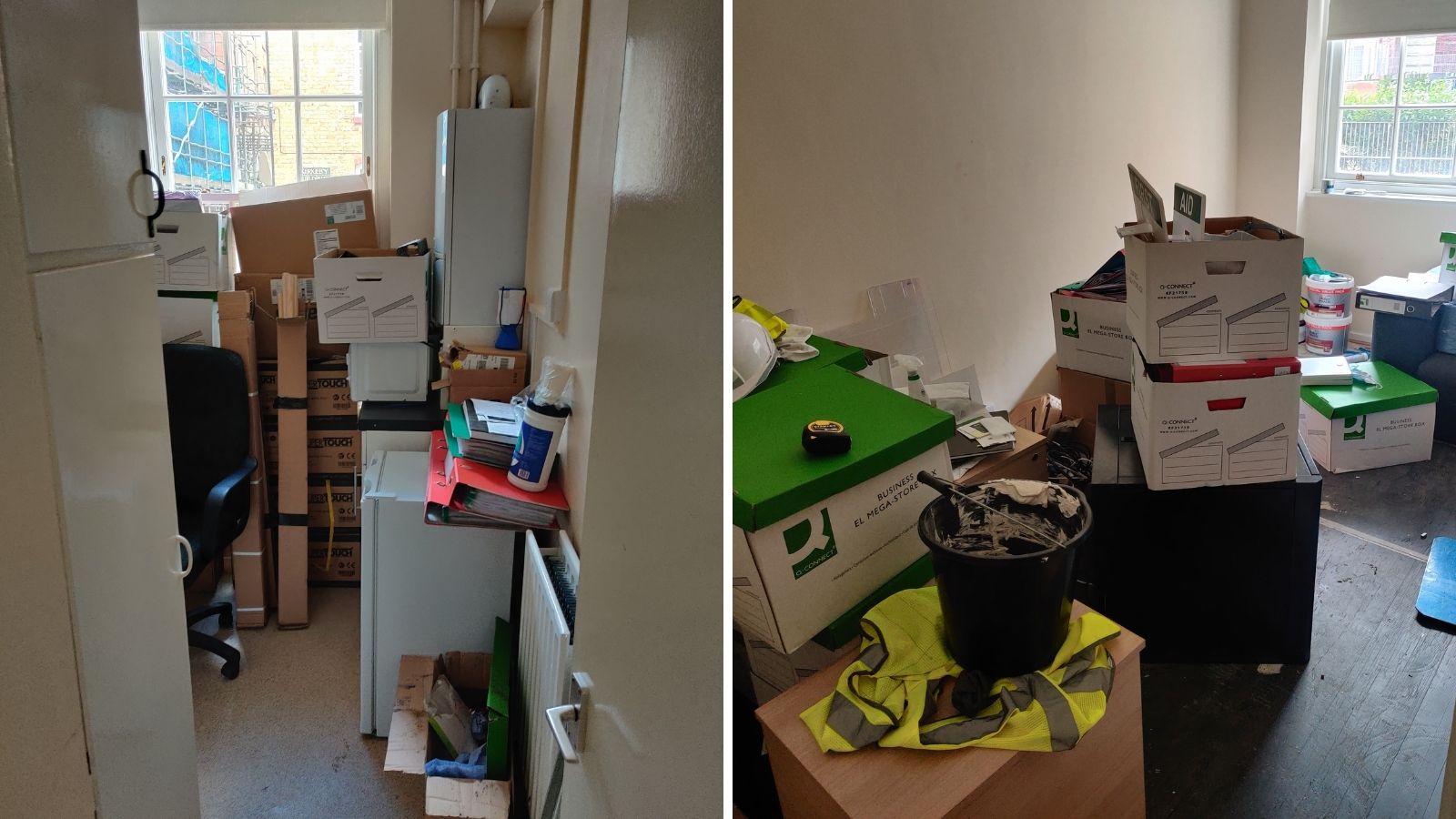 The flat being used as a site office

A TOWN Hall contractor was handed the keys to a ground-floor two-bedroom council flat to use as a site office and toilet for its workmen.

Residents in the Bourne estate, who are living in mould-ridden homes and can’t get housing repairs on basic jobs, are furious.

Wates has been allowed to use the Buckridge building home, which is in good condition, while doing major works to the estate in Holborn during the pandemic.

After being alerted by the New Journal last night (Wednesday), Town Hall housing chief Meric Apak said “this is not what I want to see”, adding that he was launching an investigation.

Shpat Agushi, who lives next to the flat and is waiting to move into a two-bedroom property, has sent emails to ward councillors about the issue.

“A two-bedroom flat like that, it’s like gold-dust,” he said. “It’s big rooms, all fixed up nice. To see construction workers using it as a toilet, storeroom and an office… it is ridiculous a family can’t move here.”

Mr Agushi, 23, has lived with his mother in the one-bed flat for almost 20 years. His mother, who has Type 2 diabetes, came to the UK from Kosovo and now supports homeless charities.  The family has been trying to get the mould and damp taken care of in their home since 2019.

But, like many other council tenants, they have been told that the works do not meet the housing repair criteria due to financial restraints.

“Basically they got me some anti-mould spray, cheap humidifiers and then told us, ‘basically you are on your own’,” said Mr Agushi.

“I went to the housing ombudsman. I had a case worker and they made a report. I’ve had the council offering to redecorate the bathroom as a gesture of goodwill. But they need to fix the cause. Otherwise the conditions will just come back.”

He said: “I have a conflicted mindset. You know there’s a housing crisis and we should be grateful for our council flat. But we shouldn’t have to live like this.”

Holborn and Covent Garden ward councillor, Julian Fulbrook, said he had taken the case up with the district office “as the use of a good flat, even for a temporary period, seems very strange”.

He added that he was “very sympathetic” to Mr Agushi’s predicament.

Responding to the concerns about the mould, Cllr Apak said the housing team had given Mr Agushi tips for tackling it, “for example, closing doors when showering and cooking, opening windows and not drying clothes on radiators”, adding that “on our last inspection in May 2021, it was noted that the mould was being well-managed by the resident in all rooms except the bathroom”.

And on the wider issue of council flats being taken up by contractors, he said: “At a time when so many people need a home, using empty flats in this way is not what I want to see.

“I have asked officers to review all empty flats being used by contractors with the intention of moving them into Portacabins and other temporary sites wherever it is possible. Homes should only be used in this way in exceptional circumstances while we have so many people desperate for a home.”

The council said the Buckridge flat was previously used as respite accommodation for elderly or vulnerable residents.

During the pandemic this was no longer possible and so it became used as a “temporary Wates welfare facility on the estate”.

The contractor is carrying out works on phase 1 and 2 of a Bourne estate regeneration. Wates are due to vacate the council flat in the autumn.

The Town Hall said the use of council accommodation by contractors for welfare facilities and site offices had been “significantly reduced”.